An “Alternate Row Middle (ARM)” spray application is where the airblast sprayer passes down every second row. The intent is to improve efficiency by cutting the driving time in half. The operator hopes to provide suitable coverage on both the sprayer-facing half of the canopy, and that half of the canopy facing the next alley. In my experience, this only works in very small/young plantings, and only for the first few applications of the season. Even then, you have to over-spray the side facing the sprayer to ensure enough reaches the far side. I’ve already captured all the pros and cons of ARM in this article, and I maintain that it’s not the best approach for protecting an orchard, bush, cane or vine crop.

So why on Earth would I be testing it here!?

I was contacted by an orchardist that planted a test block of Gala (est. spring, 2017) in an unusual way. He’s calling it “V-Trellis Vertical Axis Cross”. Basically, he has created an orchard architecture that only allows equipment (e.g. platforms, sprayers) to pass every second row. He figures it will save 35% of his labour costs. The posts lean over the driveable alleys, creating a “V” shape. Here’s a photo, and an illustration. 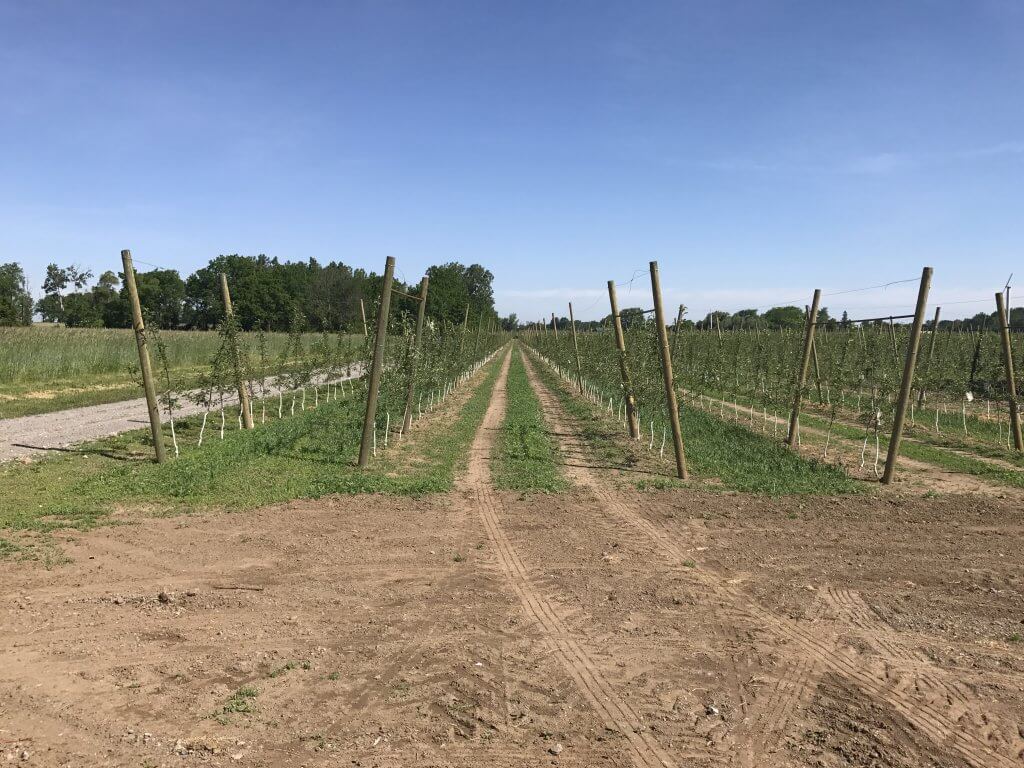 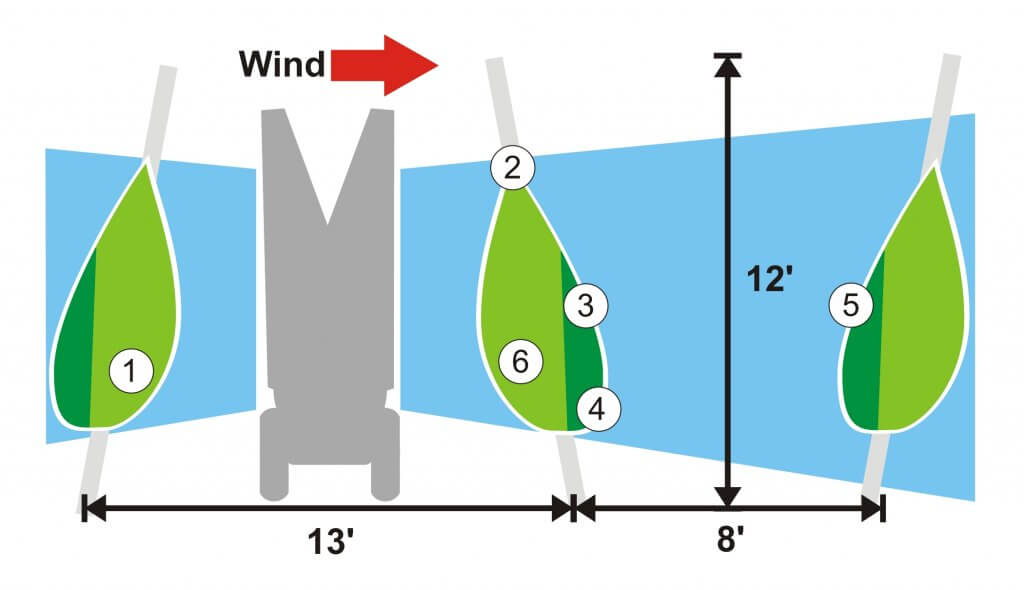 So, given that he cannot fit a sprayer down every row, we had no choice but to try to optimize sprayer settings for ARM applications. Note the six numbers in circles in the above illustration. They indicate where we would eventually place water-sensitive papers to diagnose spray coverage.

Here are the settings the orchardist was using before we made any adjustments:

And here is a video of what the sprayer was doing before we changed any settings. This is a single upwind pass, and as you can see, the spray blew through at least five downwind rows. Obviously, this was far too much air and spray volume.

When we diagnose coverage in an every-row situation, we drive the alleys on each side of the target row (i.e. two passes). But, when diagnosing ARM spraying, we want to account for every drop of cumulative coverage from spraying upwind rows. So, we have to do three passes, as shown in the illustration below. In this top-down diagram, the sprayer travels the red line. 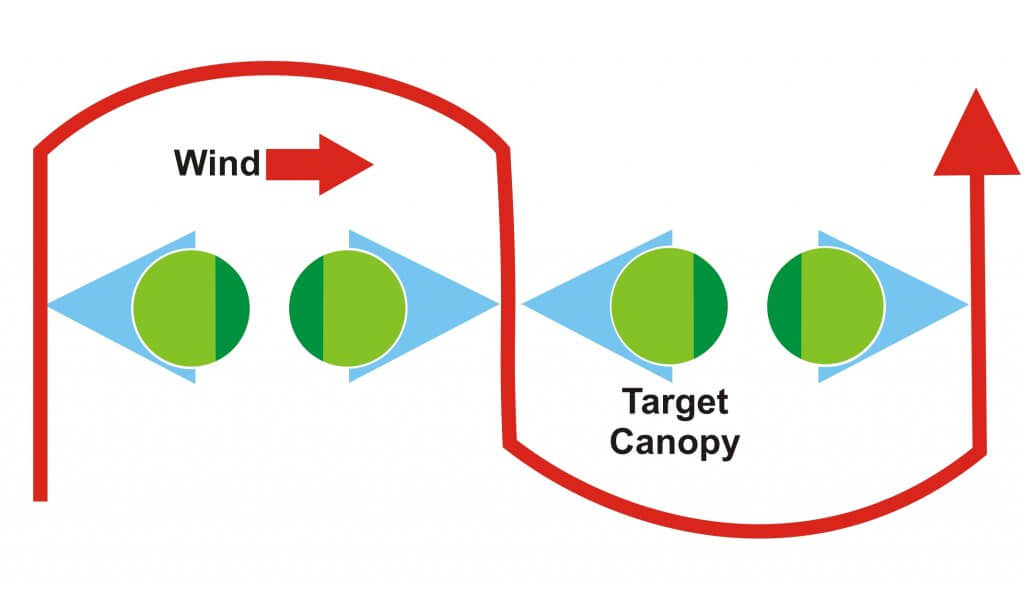 In order to establish a baseline, we diagnosed coverage for the original settings using water-sensitive papers in the six positions indicated above. We folded them over so a sensitive side faced each alley. We sprayed water and later digitized the cards to determine the percent coverage on the papers. Remember, 10-15% is sufficient coverage when spray is evenly distributed over the target at a droplet density no less than 85 drops per cm2. Here are our results, with percentages indicated in each position, and a scan of one of the papers. 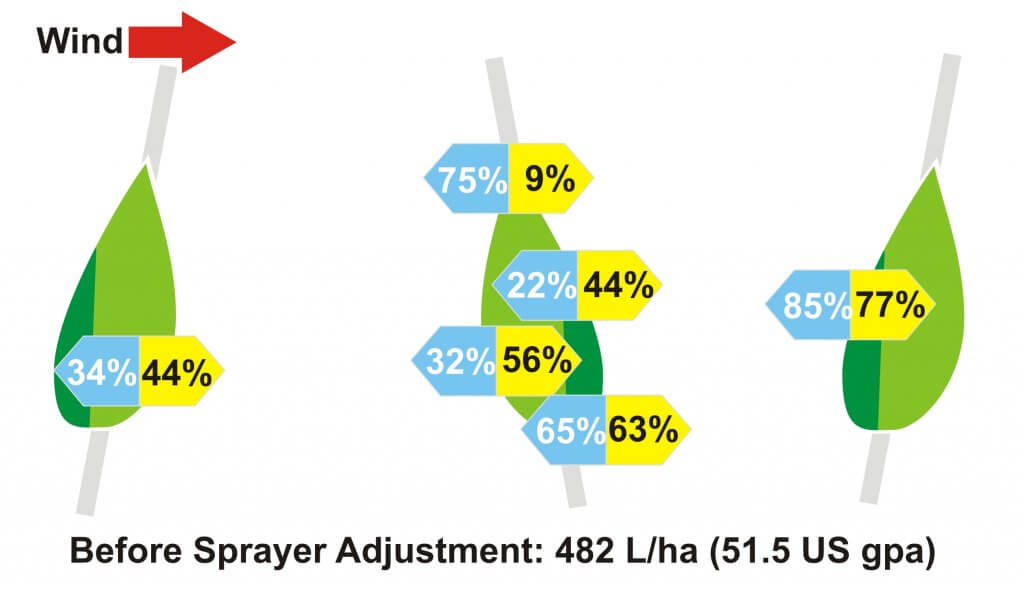 So, if the video doesn’t convince, then the papers certainly do: This was way too much air and spray mix. Next we performed a series of air adjustments using ribbon (detailed here and here) which led us to reduce engine speed from 2,150 rpm to 1,300 using the Gear-Up, Throttle-Down method. Then we used the OrchardMax calculator to establish an ideal spray volume and guide us to which nozzle rates we should use:

The following video shows the coverage from a single pass. Again, we eventually did three passes to capture the cumulative coverage. This video simply serves to show how in ARM applications, the sprayer-facing side always looks much better than the side facing away. Also note how much quieter the sprayer is and the reduced drift and blow-through.

And here is the resultant coverage: 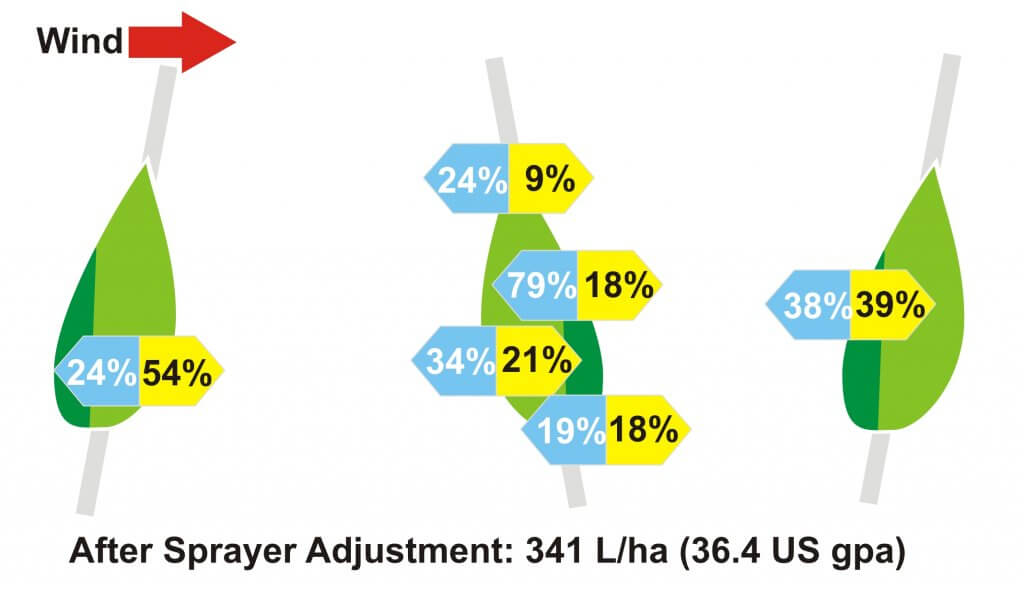 In the end analysis, we saved the grower ~30% of their spray mix, greatly reduced noise and spray drift, and still achieved suitable coverage in the target canopy. So does this mean ARM applications are redeemed? I refer you, kind reader, to my introduction where I said ARM can work in young plantings and early season applications. As this new planting grows and fills, it’s going to be increasingly difficult to achieve sufficient coverage. Changes to the sprayer settings to account for that difficulty will make the applications less efficient (i.e. more fuel, more spray mix, more drift and less uniform coverage). It remains to be seen if the spray inefficiency (and potential subsequent reduction in fruit protection) inherent to this orchard architecture is worth the estimated 35% savings in labour costs.

[#WindTunnelInABox Sale] Easy one person setup and deconstruction in under 30 mins. Fits in any pickup or large SUV #spraytech https://tinyurl.com/y6bmphtq

Fantastic kit. What an opportunity to study or demonstrate the movement of sprays.

[#WindTunnelInABox Sale] Easy one person setup and deconstruction in under 30 mins. Fits in any pickup or large SUV #spraytech https://tinyurl.com/y6bmphtq 2

Just a couple more days until our #AbAg precision sprayer event with @NufarmCA. Come and see #WEEDIT Quadro in action and learn about the future of resistant weed management on Sept. 25 in Turin, Alberta. We'll see you there!