In part 1 of this article we introduced Falcon Blueberries, a highbush blueberry operation that made significant changes to their crop management and spray program in an effort to protect their crop as efficiently as possible. 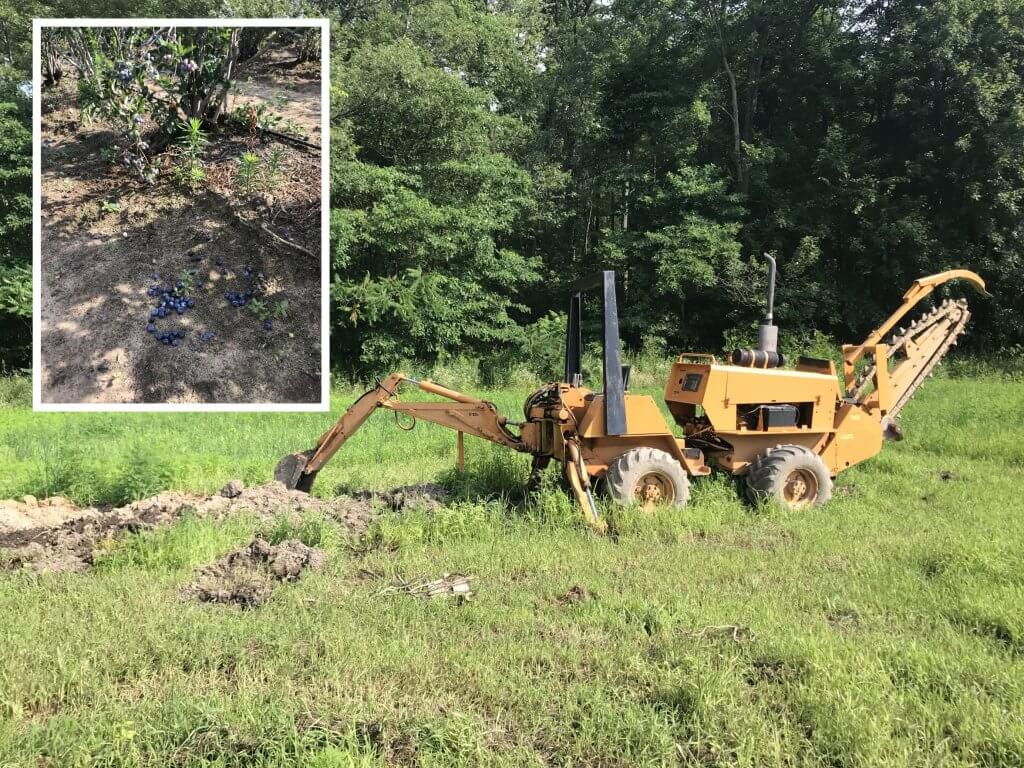 Beyond the capitol cost of a new sprayer, time and effort are required to learn operation and maintenance. But it was worthwhile. The design of the old sprayer (Kinkelder) was more suited to semi-dwarf or even standard orchards than highbush blueberries, which are smaller and closer to the sprayer. As a result, even when calibrated, the sprayer used excessive air and spray volume.

The Kinkelder nozzles leaked and did not respond when shut down at the end of rows. This translated to almost ~25% more spray emitted than the acreage required. The following graph shows the water used by the Kinkelder in 2017 (blue bars) versus the potential usage by the Turbomist sprayer (orange bars). In 2018, using the new sprayer plus CAS calibration (grey bars) the operation saved ~65% of it’s typical water volume.

That’s 54,280 litres of water, which can be critical in operations where water is a limiting factor. This also represents an estimated 15 hours of filling/spraying time, which translates to reduced operator fatigue and exposure, as well as fewer man and equipment hours. 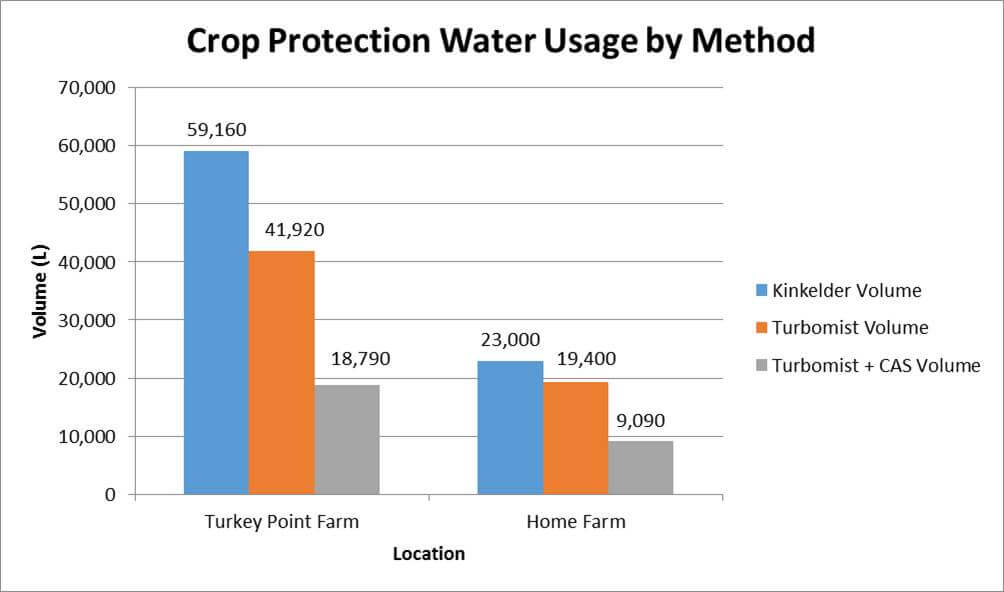 Crop-Adapted Spraying requires the ratio of formulated product-to-carrier to remain the same, but less spray mix may be warranted per acre. Stated differently, the grower mixed the spray tanks exactly the same way in 2018 as in 2017, but drove further on a tank in 2018.

The decision of what and when to apply was at the grower’s discretion. Wisely, they chose to utilize integrated pest management in both years and closely monitored the crops and the weather.

The following graph shows the 2017 pesticide cost (blue bars), the hypothetical savings from switching to a more efficient sprayer (orange bars) and the realized savings from the new sprayer plus the CAS calibration method (grey bars). Just as with the water, the grower saved of 65% of spray mix, representing $5,117.92 in pesticide savings. 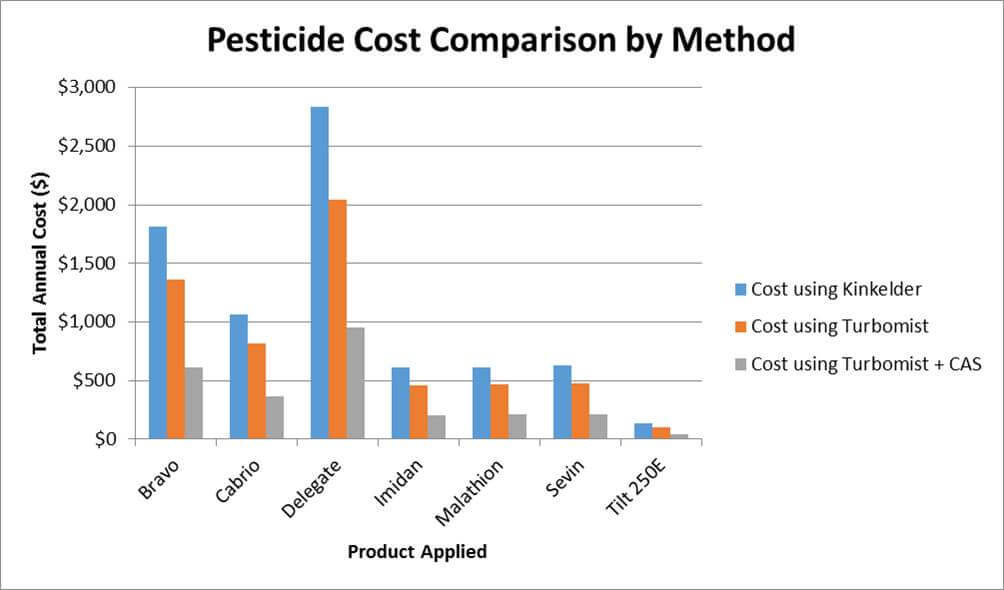 Customers of the U-pick portion of the operation regularly enquire about pesticide use. The reduction in pesticides became a positive speaking point, and aligned with the grower’s philosophy about reduced environmental pesticide loads. Further, while many blueberry growers experienced a market shortage of certain fungicides in 2018, Falcon Blueberries actually returned unused product to the distributer.

Growers reported less early-season disease damage, which saved considerable time on the packing line because there was less fruit to cull. Disease levels rose to typical levels later in the season, but there was still a net savings in labour.

There was concern that such a significant pruning of the crop annually would reduce the quantity of the yield. Additionally, there were concerns that such sparse crop architecture would require trellises to support the bush as heavy fruit set caused it to droop into the alleys. Still further, the Crop-Adapted Spraying model reduced the annual pesticide usage by ~65%, and this raised concerns about fruit quality. 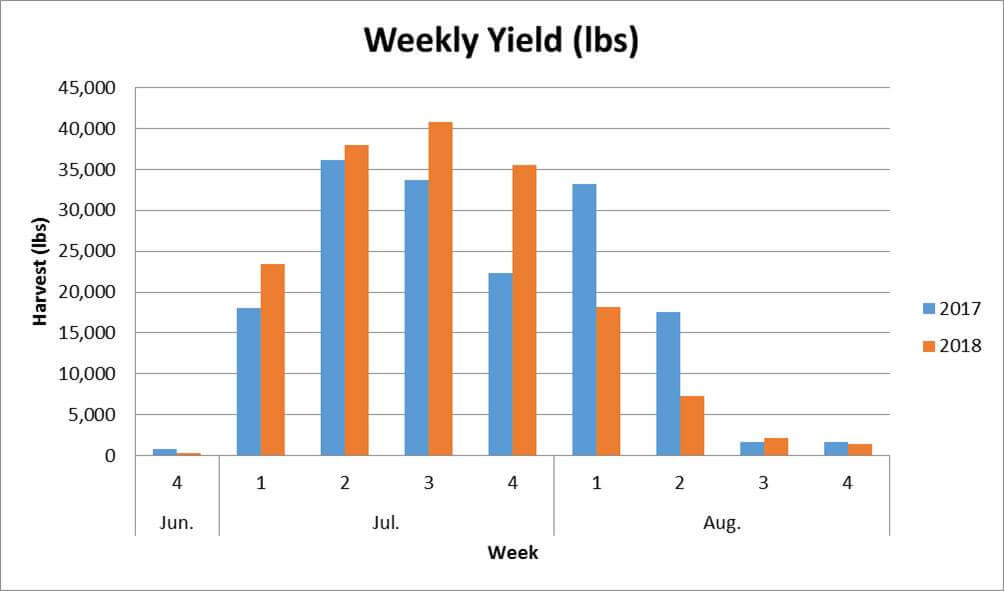 SWD represents a serious economic threat to blueberry operations. Traps were placed in the operation (three in the crop and one in an unmanaged wild host along a treeline) and monitored weekly. The following graph shows the in-crop trap counts for Falcon blueberries in 2017 (green) and in 2018 (blue). Note that SWD peaked later in 2017 than in 2018 due to environmental conditions.

The wild host trap (purple) shows counts increased two weeks ahead of the in-crop traps (blue) indicating that the pest was being controlled. This control ends after the 2nd week of August when picking and pesticide application stopped. When counts from a nearby operation with markedly difference control methods (red) are compared to those at Falcon (blue) we see far fewer SWD, supporting the claim that the pest was being controlled.

Weekly SWD counts for 2017 and 2018. Data includes a 2018 wild host trap, and the counts for a nearby blueberry operation for comparison.

The success enjoyed at Falcon was a result of several operational changes. This is a situation where the whole equalled more than the sum of it’s parts – it could only be achieved by making each of the changes listed at beginning of this article. Further, these are ongoing activities that require regular observation of weather, crop and pest conditions, and making informed changes (i.e. confirming coverage) to the spray program.

As these changes become the new normal for Falcon Blueberries, we hope they will continue to enjoy reduced input costs, a reduced environmental impact, and a healthy crop.