Many horticultural commodities, such as turfgrass and nursery crops, include the application of live nematodes as part of their annual IPM program. In 2013 we performed preliminary research into the claim that a grower’s nematode applications were becoming less effective. In the course of the investigation, it was discovered that the nematode concentration (i.e. dose) sampled from the spray nozzle was diminishing over the course of the application. 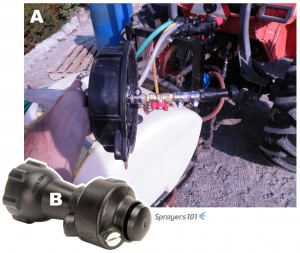 (A) Tank-rinse assembly mounted through tank lid with a flow-regulating valve. (B) Close up of tank-rinse nozzle.

After eliminating potential sinks in sprayer’s plumbing (e.g. filters, strainers, etc.) it was hypothesized that the nematodes were adhering to the interior of the poly tank. As the level of spray mix dropped this could reduce the concentration. To test the hypothesis, we installed a tank-rinse nozzle to sparge the inner walls of the tank throughout the application and to re-suspend any stranded nematodes.

(A) Nematodes, as-shipped, in a sponge. (B) Suspending nematodes for tank mixing.
(C) Counting nematodes. (D) Undiluted, healthy nematodes in a stock solution via microscope ocular.

The 200 L tank was inoculated with a stock solution containing 25 million nematodes (125 nematodes / ml). 20 L of the spray solution was sprayed into a bucket every 10 minutes, whereupon 1 L of spray solution was immediately removed and 1 ml volumes were sub-sampled for counting.

In the first trial, nematode counts continued over a period of 2 hours and viability dropped by >40%. It was assumed the damage was caused by prolonged circulation through the roller pump. In subsequent trials, the sampling duration reduced to 10 minutes (more realistically reflecting the time it took the grower to apply 200 L in the field). The tank was rinsed and re-inoculated for each trial. 1 m

l samples were drawn from the spray gun, which operated continuously, with and without the tank rinse nozzle in operation.

Univariate analysis confirmed data normality and a GLM procedure was conducted for analysis of variance. Results indicate that nematode concentration dropped by >15% without tank-rinse with minimal nematode damage observed. With the tank-rinse nozzle engaged, the concentration still declined slightly, but significantly less (<5%) (see graph below). 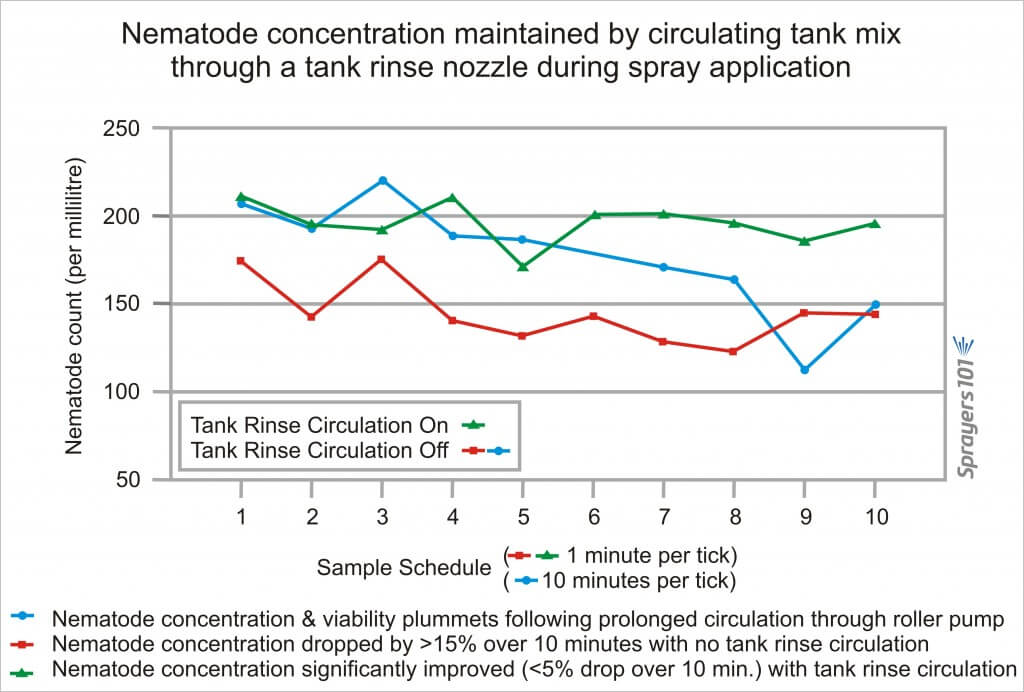 Nematode concentration over time for each condition.

The results suggest that a tank-rise system preserves nematode concentration throughout an application and may lead to more efficacious applications.