In early July 2016, a farm supplier contacted us on behalf of a client with a history of disease control issues in his field pepper operation. He wanted us to calibrate their sprayer and diagnose spray coverage to see if there was room for improvement. Coverage doesn’t equal efficacy, but it’s generally a reliable indicator. When we arrived at the field the winds were gusting over 15 km/h, which had the potential to create a massive drift issue. We were only spraying water, so it was decided that if we managed decent coverage in those conditions, there would be no need to worry on an acceptable spray day. 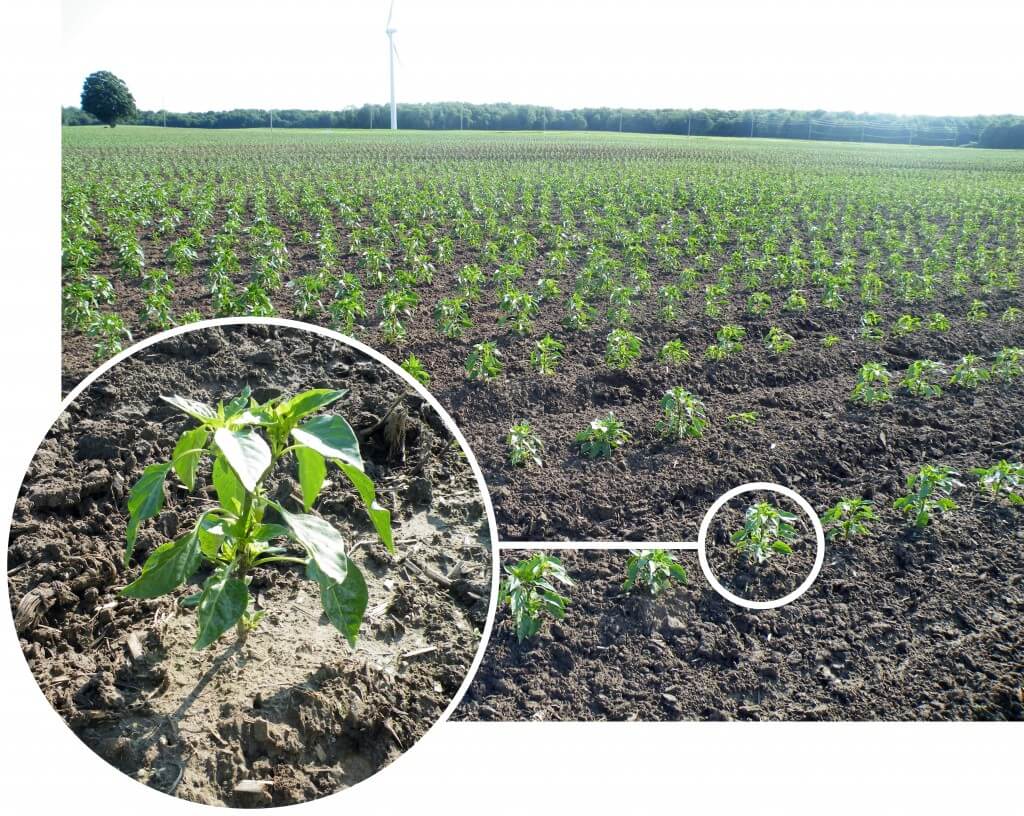 The grower traditionally ran two different settings on his sprayer. They were relatively low volumes for a vegetable operation, but the crop was still small at this stage, so we did not propose raising the volume:

To test the coverage with these settings, we folded a piece of water-sensitive paper over a leaf to cover both surfaces, and wrapped one around a hollow tube to mimic a plant stem (see figure). Three plants were papered for each sprayer pass. Papers were collected, scanned into a computer and analysed for percent-coverage and droplet density. When diagnosing coverage for a horticultural crop, a distribution of 85 medium drops/cm2 and 10-15% coverage is a reasonable standard for most applications. 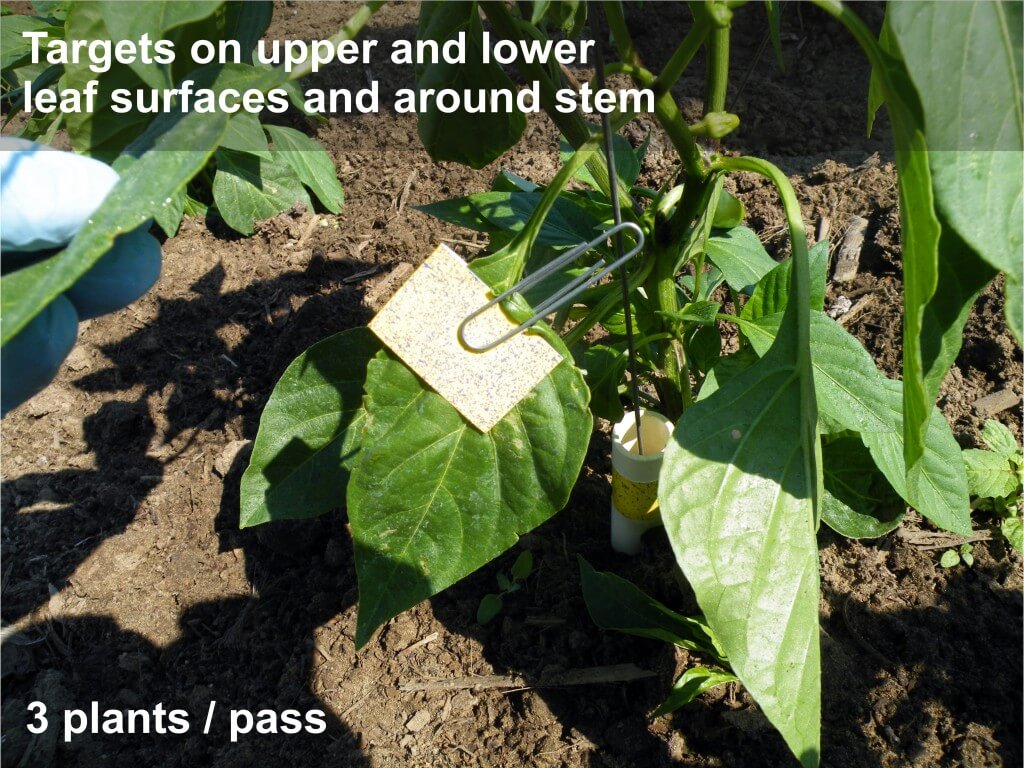 Location of water-sensitive papers in situ.

The first condition (the AITX tips) averaged 17% coverage on upper leaf surfaces (37 drops/cm2). These were coarse droplets, so they don’t apply to the 85 drop/cm2 target, but distribution appears even. However, there was no deposit present on the underside of the leaves (See figure 1). This is not surprising because the AITX tips produce very coarse droplets that tend to move straight down, which is not conductive to under-leaf coverage. 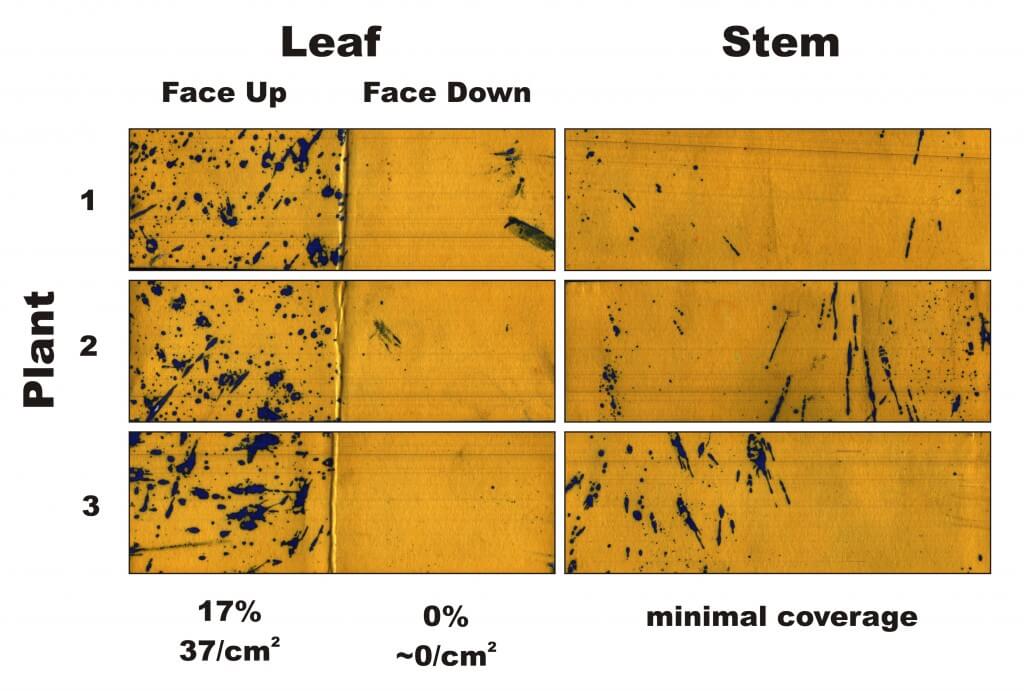 Figure 1 – Water-sensitive papers from three plants sprayed in Condition 1. Percent coverage and droplet density are calculated for the leaves, and a visual inspection is made of the stems.

The second condition (the ConeJets) provided better coverage. The fine droplets produced covered an average 17.5% coverage with a distribution of 99 drops/cm2 on upper surfaces, and 23% coverage with a distribution of 185 drops/cm2 on lower surfaces. Panoramic stem coverage was improved as well (see figure 2). This is excellent coverage, but the fine droplets were highly prone to drift (see below). With no form of drift control, this set up is undesirable.

Figure 2 – Water-sensitive papers from three plants sprayed in Condition 2. Percent coverage and droplet density are calculated for the leaves, and a visual inspection is made of the stems. 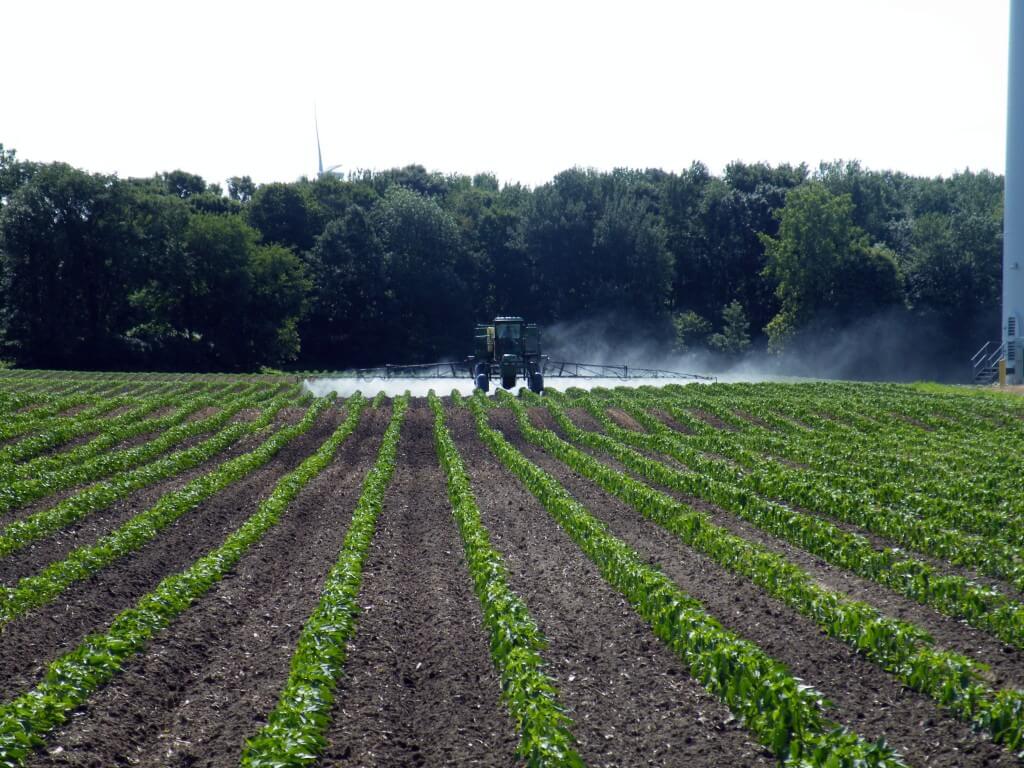 With no form of drift control, the fine droplets produced by hollow cones create unacceptable spray drift, even in moderate wind conditions.

This led us to propose an unorthodox boom arrangement: We set up a directed spray application using a hollow cone over the row (the grower’s original ConeJet) and a drop arm in each alley suspending two TeeJet XR 8004 flat fans. 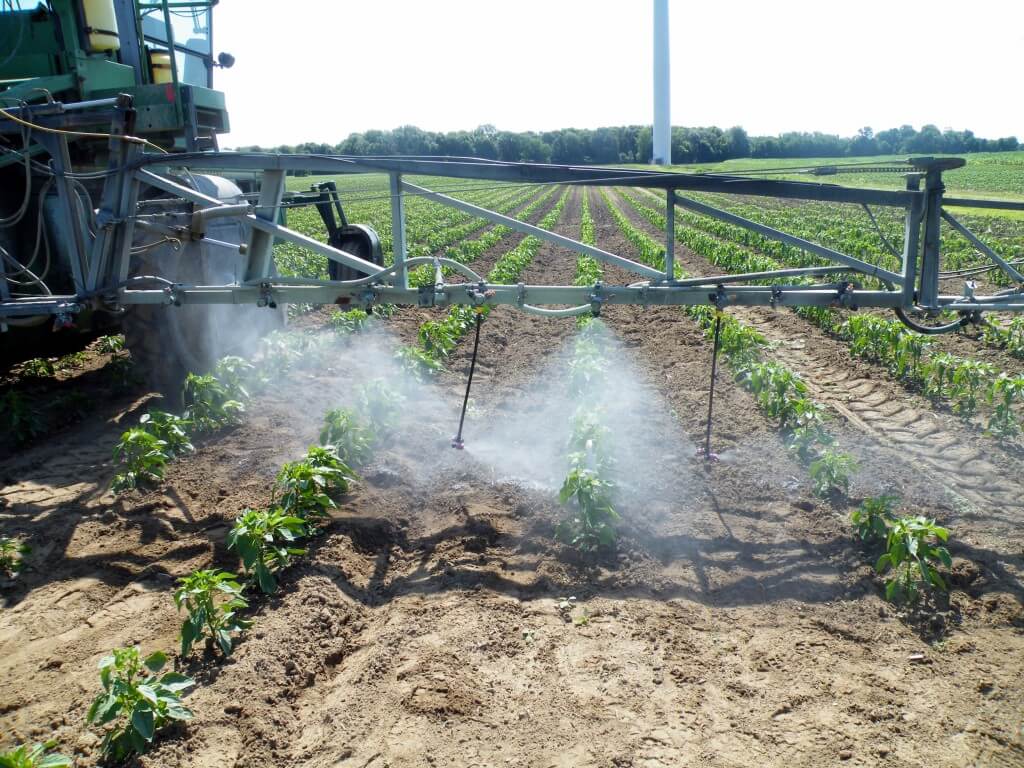 We did not use an air induction fan to avoid the Very Coarse spray quality and we used 80° instead of 110° to ensure the spray did not overshoot or undershoot the plant. Here are the details of the third set up:

This set up raised the volume considerably and aimed spray directly at the sides of the plant. Coverage was excessive, and in a few cases exceeded what the diagnostic software could reliably resolve (see figure 3). Suffice to say, coverage was more than sufficient. Since the plants were still small at this stage, it was decided we would let them “grow into the volume” and come back to check coverage once they were at full size. 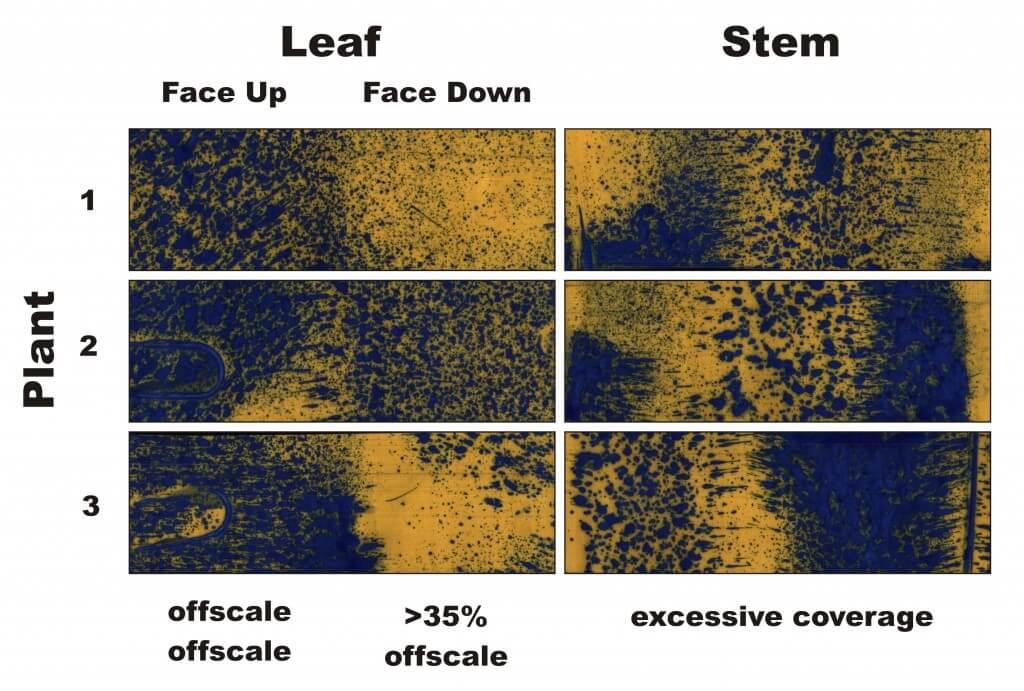 Figure 3 – Water-sensitive papers from three plants sprayed in Condition 3. Percent coverage and droplet density are calculated for the leaves, and a visual inspection is made of the stems.

When we returned in mid-August the plants had reached full maturity. In this final coverage trial, we added a second water-sensitive paper to each plant to span the height of the crop canopy, which had grown considerably. 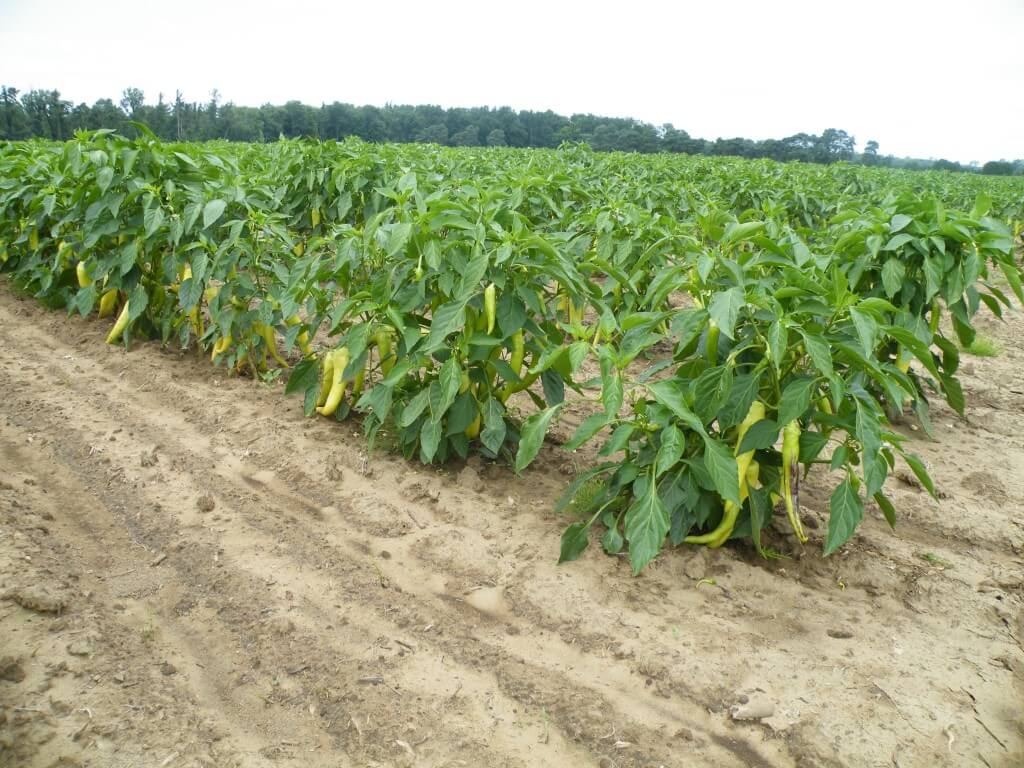 The same pepper plants ~5 weeks later had more than doubled in size.

Coverage was reduced compared to how we left things in July, but appeared to be sufficient on most surfaces (see figure 4). The papers showed upper leaf-surface coverage of 63%-to-offscale and droplet distribution of 137 drops/cm2-to-offscale. Coverage on the lower leaf surfaces was greatly reduced to 4-4.5% and 36-90 drops/cm2. Panoramic stem coverage was present, but minimal. Applying higher volumes would likely have improved matters. 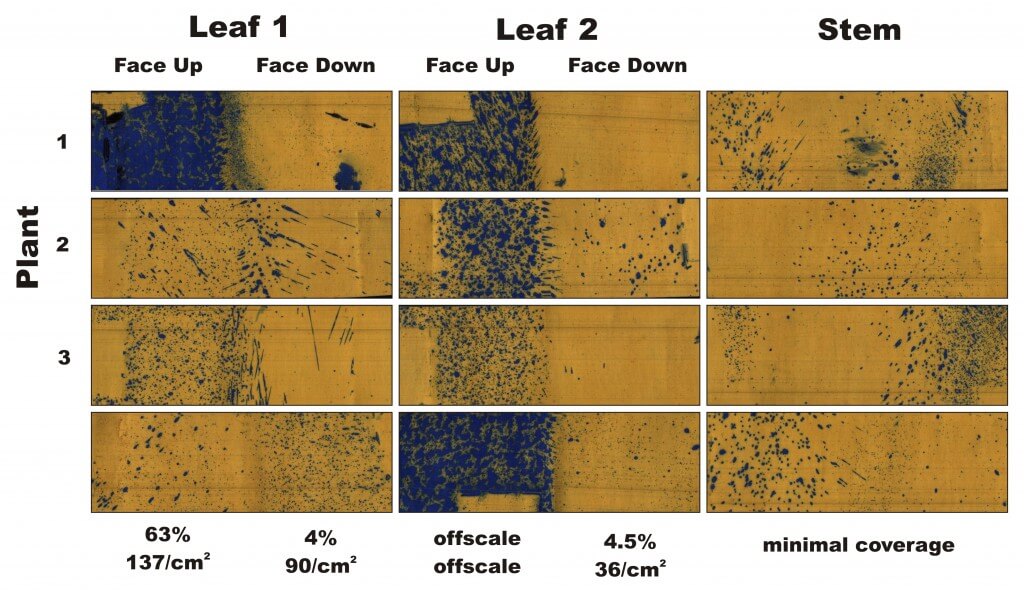 Figure 4 – Water-sensitive papers from three plants sprayed in Condition 3, ~5 weeks later. Percent coverage and droplet density are calculated for the leaves, and a visual inspection is made of the stems.

When asked about the drop arms, the grower reported “They are a bit of a nuisance because they take extra time to put on, and they get caught in the bush at the back of the field. But if they increase our coverage, then they’re worth the extra effort.”

Adding drop arms to a vegetable sprayer may be unconventional, but if fungicide coverage is a concern, and the drops will fit between rows, they might be worth a try. Carefully consider the volumes you use because they should reflect the size of the plant canopy you are trying to protect. Finally, water-sensitive paper provides excellent feedback to help you decide if your field volume, nozzle rates and nozzle positions are providing acceptable coverage.