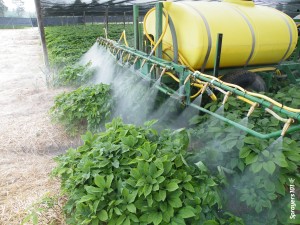 Spraying water in a 4 year-old garden

Setting up for this one took four hours.
We tested boom pressure, travel speed and each nozzles’ output using a Spot-On SC-4 timed-output vessel.

Each of the “newer variety” of Arag microjects emitted an average 0.9 gpm. I say average, because they were very difficult to calibrate – minor changes to the nozzle head created variation from 0.8 gpm to 1.2 gpm. In addition, the lack of nozzle strainers combined with the very sandy soil resulted in several plugged tips during the two tanks of water it took to confirm the 25 nozzles were operating optimally. Basically, one big pain.

The drops were angled to clear the very high beds in this garden, and disc cores were full cone D5-DC35’s to ensure enough of the spray made it into the seven-foot wide under-canopy to give effective stem and under-leaf coverage.

In the end, coverage was more than sufficient for a typical foliar fungicide application, and in future trials we’ll be testing lower operating pressures to the point of coverage failure to determine how much is enough.

We’ll also look at replacing the Arag tips with moulded hollow cones. Hopefully, same coverage at same pressure, but more consistent rates, the ability to use slotted strainers, and a cheaper tip.