We get this question a lot and it’s tough to give a concrete answer because there are so many factors that come into play:

These are questions you need to consider before you can start to diagnose coverage. Once you understand what your target is and how the pesticide is intended to work, you need a way to visualize your spray coverage. Some people look for the shine on leaves, or a cloudy residue. That’s better than nothing, but we recommend water-sensitive paper for this task, and we’ve written a lot about how to use and read it here and here.

This metaphor will help explain. 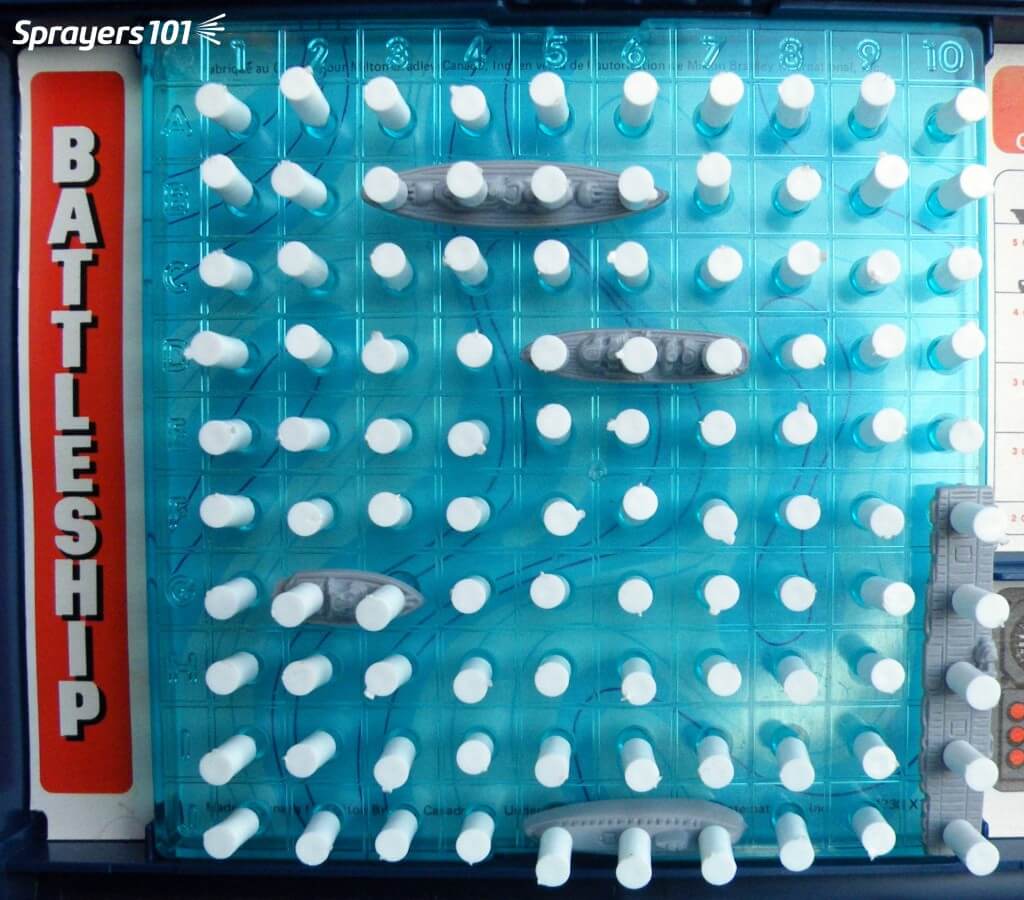 Unless the label specifically asks for a drench, this is too much coverage.

Imagine the boats on this Battleship game are the pests, and the board they’re on is a leaf. The white pegs represent the spray droplets. In this first image, we see 100% coverage and a very high droplet density. Sure, we certainly got every pest, but frankly “dead is dead” and there’s no need to completely drench the target, unless the application is specifically intended to do so. When you spray a target past the point of run-off, you are not adding more pesticide to the target – you are displacing what was already there. The surface will not exceed the concentration of product you sprayed (with the possible exception of mixes that include a sticker). This is excessive coverage and it’s a waste. 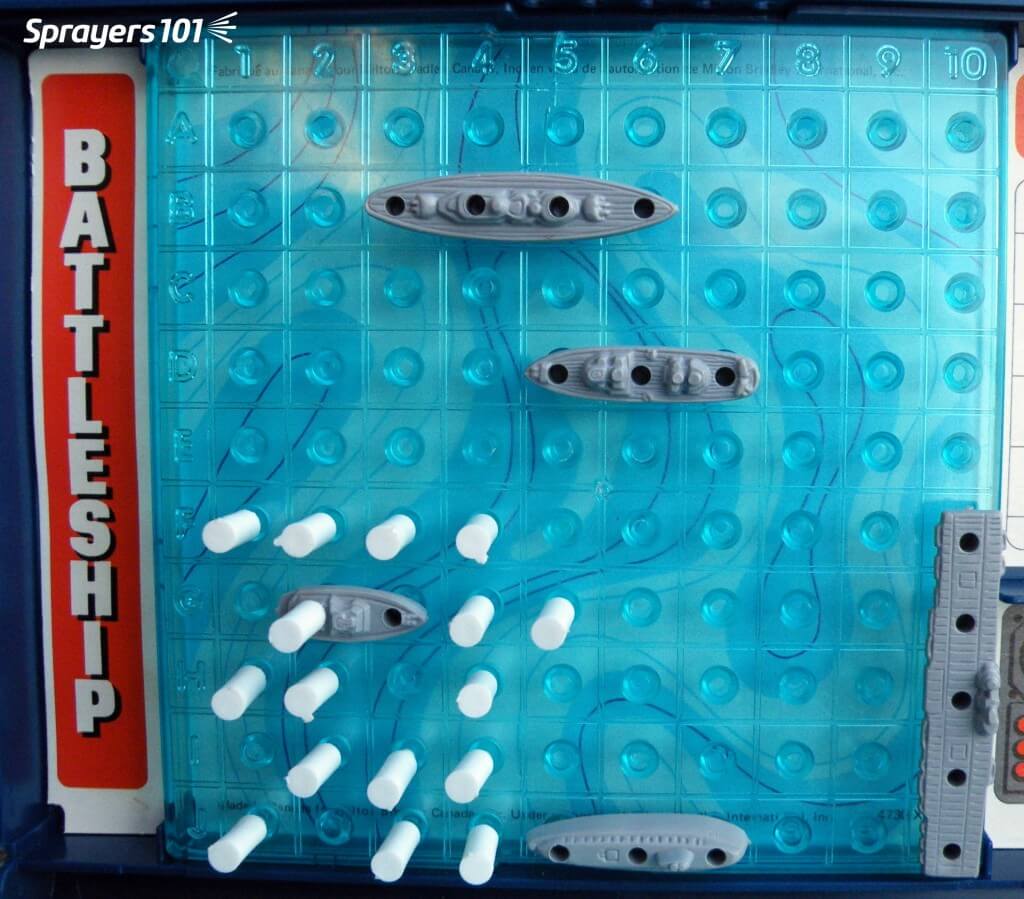 15% coverage is good, but the distribution is bad.

In the second image, we’ve covered about 15% of the target area, and we have a very high droplet density. You can see that if this was a contact product, we’ve missed quite a bit of the leaf. If our pretend pests are sedentary and the contact product won’t redistribute, then we’ve missed. This image shows the value of evenly distributing the spray over the target. If this was water-sensitive paper, which turns from yellow-to-blue when wet, we would advise the applicator to note how much yellow space there is, versus how much blue, and consider whether the pest could fit between the drops. 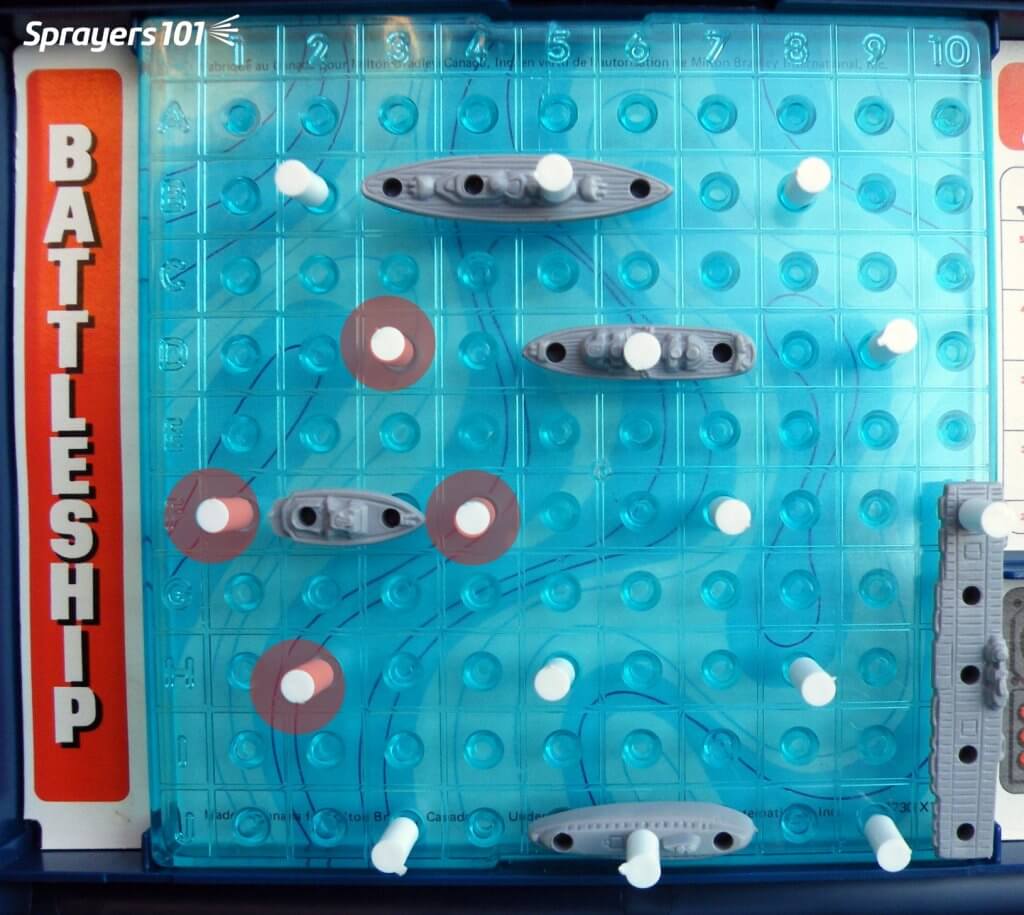 15% coverage, distributed evenly. Droplets may have some pest activity beyond the edge of the residue (light red circles).

In the third image, we are still covering about 15% of the target, but you can see the spray is distributed more evenly. Yes, we still missed a pest, but spraying is playing a game of odds. You want enough spray to increase the odds of controlling a pest, but not so much to waste spray (and money and time). This image represents an ideal coverage situation. If this pest moves, or this pesticide redistributes even a little, it will affect the pest. Plus, it’s difficult to determine where the threshold of influence lies around pesticide residue. In other words, imagine a small circle around each droplet (light red circles in the image) where there’s still enough pesticide to affect an adjacent pest. Considered that way, each droplet covers a lot more area than it first appears. Of course, even if that’s true, we still missed one pest. 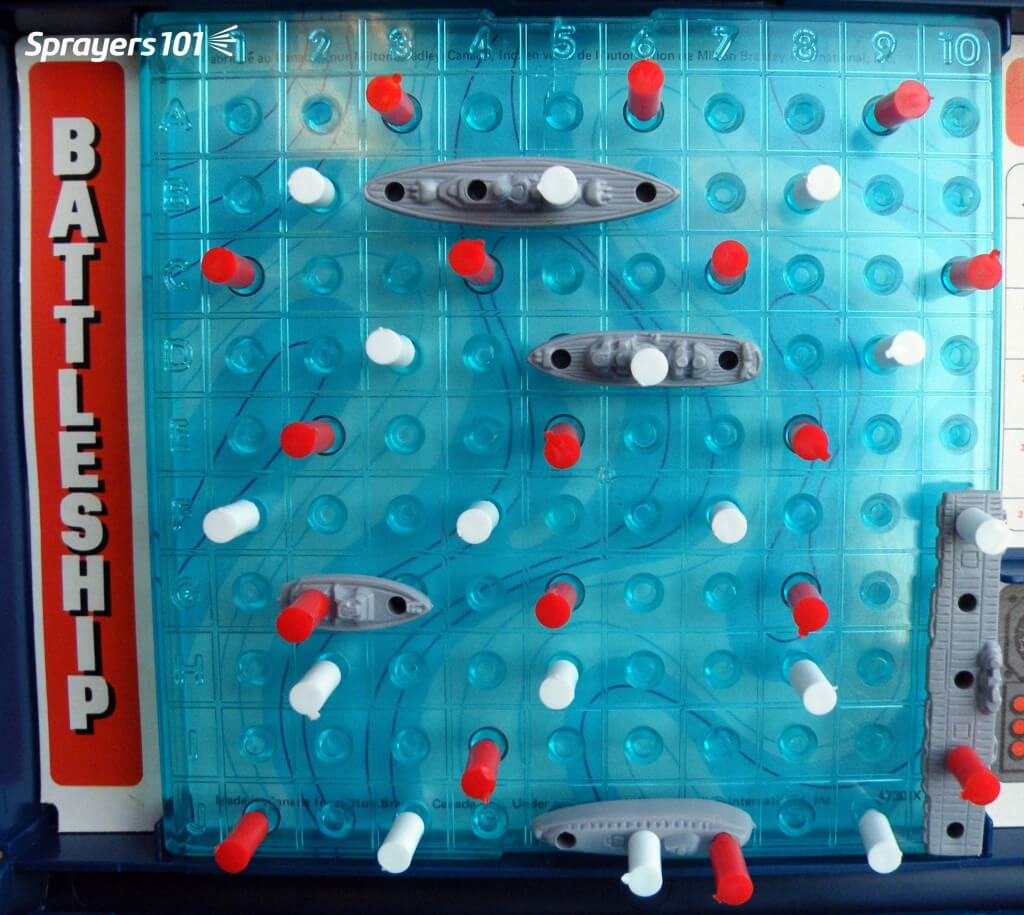 In the case of fungicide applications, subsequent sprays fill in gaps left by previous sprays. If timing is prompt, residual activity will see you through.

In this last image, we see red droplets have been introduced. This represents a fungicide application where an earlier (white) application retains some residual activity. The second (red) spray application almost never lands on top of the first, giving much more protection on the target. You can see that with the second application, we got that pest!

So, how much is enough? There’s no universally-accepted threshold of droplet density or area covered – there are too many variables. There’s always some interpretation required. However, evaluating coverage using water and water-sensitive paper can be very informative. You can see the impact of changing sprayer settings, or see how weather affects coverage, or at the very least get confirmation that some spray is reaching he intended target. If you don’t like what you see, you’ll need to reconsider the job you’re doing.

As for the pests, we hope you sink their battleships.