In June, 2014, I was invited to Durocher Farm in New Hampshire to see their new airblast sprayer. In years previous, spotted-wing drosophila was a significant pest in this two acre high bush blueberry planting. Since purchasing their new sprayer, they haven’t had any trouble. That’s quite an endorsement! 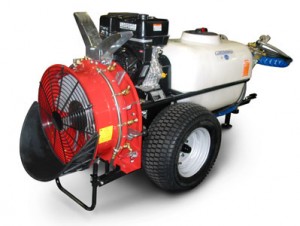 I’m not sure what I expected, but it wasn’t this tiny Italian-made Carrarospray. Designed to be pulled behind vehicles without PTO, this 400 litre airblast featured adjustable air deflectors, and was powered by a Briggs & Stratton four-stroke engine. It even had a trash guard, a “kick-stand” and a clean water tank for hand washing.

The value of such a small sprayer in blueberries was immediately obvious. It fit beautifully between the bushes, so the potential for physical damage to the berries was nil. The pull-start motor burned very little fuel and compared to a full-size sprayer, made less noise. The sprayer was pulled (in this case) by a mower, so the grower not only sprayed, but mowed his alleys at the same time.

However, the best feature was the two-foot diameter fan and deflectors – here’s why: 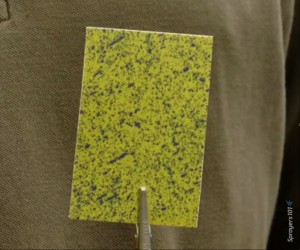 Coverage from the top-centre of the bush. Card is 2×3 inches.

When I participate in sprayer workshops or help operators with coverage and calibration issues, it almost always comes down to matching the air to the crop canopy. You can read about it, here. In the case of grape, cane and bush crops, we struggle to choke back the air. Gear-up Throttle-down, fan gear and blade pitch are often brought into play. Exhausting those options, we’ve even had sprayer operators speed up to reduce the blow-through.

In this case, the air speed and volume was sufficient to displace the air in the blueberry canopy and replace it with spray-laden air with minimal blow-through. Combined with an appropriate spray volume and distribution over the boom, the results were excellent coverage and high efficiency. 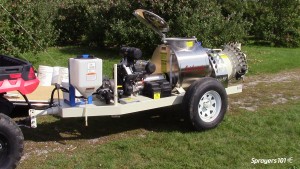 Many companies other than Eurpoean manufacturers offer smaller airblast models. Canada’s Turbomist line, for example, have small sprayers with 19 inch fans and are working on a new speciality 50 US gallon airblast sprayer that’s ATV driven and powered by a a Kohler motor.

When considering a new sprayer, consider the size of the canopy you want to spray, as well as the area of the planting. A small fan often means a small tank, and that translates to more frequent refills, but the improvement in coverage and reduction in blow-through is well worth it. Plus, perhaps you can mow your alleys while you spray!

The right size sprayer for the job – thanks to Penn State, Univ. New Hampshire and Chazzbo Media (2014).

Using the Carrarospray in highbush blueberry (2014).

We staged this video (spraying only water) to show how a sprayer can be too small for an operation. This 3-pt hitch GB cannot overcome the cross wind and the spray barely reaches the apple trees. Reducing travel speed and increasing pressure won’t cut it, either (2011).

Do you blindly trust a presenter's interpretation of graphs, tables and charts? This simple, 15 min. talk on interpreting descriptive stats might help.

"If you torture the data long enough, it will confess to anything." – Ronald H. Coase, Economist

Do you blindly trust a presenter's interpretation of graphs, tables and charts? This simple, 15 min. talk on interpreting descriptive stats might help.

"If you torture the data long enough, it will confess to anything." – Ronald H. Coase, Economist