DOWNLOADIn April 2014, NDSU extension published an excellent factsheet explaining what thermal inversions are, how to detect them and how they affect pesticide spray drift. That factsheet inspired this article.

The Earth’s Atmosphere. The illustration of the Earth is to scale, but the landscape is not. Our focus in on the Surface Boundary Layer.

The Earth is surrounded by a bubble of air called the atmosphere, and while you can’t see it, imagine it as a bubbling, swirling mass that moves like water. The lower part of the Earth’s atmosphere (the Surface Boundary Layer) is directly influenced by the Earth’s surface and everything on it. As it drags and percolates over the surface, it experiences relatively rapid changes in windspeed, temperature and humidity (on a time scale of an hour or less).

Dry air naturally cools with elevation, at a rate of about 1°C per 100 m. This change, called the Adiabatic Lapse Rate is caused by pressure changes with elevation. As we move up, the weight of the overhead atmosphere decreases, pressure drops, and air expands. That expansion takes work, and that creates the cooling effect (see the red line). See how simple thermodynamics are?

When we add the effect of daytime solar heating and night time cooling, the rate of this temperature change is affected, and this changes how airborne particles like spray droplets settle, flow, and disperse.

A hot-air balloon is a metaphor for convection cells that create thermal turbulence.

On a clear, relatively calm morning, the sun emits short wave radiation, which is absorbed by the Earth’s surface. The surface conducts some of this energy deeper into the ground as well as heating the air near the surface. This creates a temperature gradient wherein the surface is warmest, and the air gets cooler with elevation (see the red line).

As the air warms and expands, it becomes less dense and rises, similar to a lava lamp or hot air balloon. As it rises, cooler air sinks and the air begins to circulate in a Convection Cell. This is called Thermal Turbulence, and is a very effective way for airborne particles, such as pesticide spray, to be rapidly diluted. This is also how the atmosphere disperses pollution.

If the morning were overcast instead of clear, the clouds would intercept much of the sun’s radiation, absorbing or reflecting it. As a result, the Earth’s surface would still warm up, but much more slowly. Thermal turbulence would be suppressed.

As the sun passes over and the wind starts to rise, the convection cells get disrupted by the wind and experience mechanical turbulence (see the blue line). This type of turbulence mixes warmer air near the ground with cooler air above it, and also suppresses thermal turbulence.

As the energy from the sun lessens, the soil begins to cool, which in turn cools the air next to it. Once the air cools enough to be colder than the air above it, we have the beginning of a Temperature Inversion (see the green line). It is called that because it is now the reverse of the typical day-time temperature profile. The height of the inversion grows with time, reaching a maximum of about 100 m by sunrise. Within the inversion layer, thermal turbulence no longer exists.

We now know that during a sunny day, solar energy warms the Earth’s surface, and the air near the surface, more than air above it (see the red line). We also know that this causes convection cells to circulate. The rising parcel of air will cool and shrink as it rises through the relatively cooler air above it. Conversely, cool parcels of air fall feely through warm air, and the resulting mixing action allows airborne particles (such as pollution or pesticide spray) to become much less potent at ground level. This helps protect us from drift damage.

Now let’s imagine an air parcel that is displaced upward during an inversion. This time it is cooler than the air above it, and as it begins to rise it gets denser. This prevents it from rising, and it will return to the layer where started. In other words, it stays where it is. It is the same for a sinking parcel of air: it will start off warmer (and less dense) than the air below it, but will warm further as it falls. As a result, it will want to rise back to its origin.

Thermal Turbulence is suppressed during a Temperature Inversion. Particle-laden cool air at the surface cannot rise, and warm, clean air cannot fall. No dispersion occurs, and the concentrated, particle-laden air tends to move downhill or laterally with light winds.

The result is that in an inversion, air does not mix by thermal turbulence. Spray drift (or vapour) stays concentrated in the air into which it was released. And cool, dense air tends to move downhill or laterally with light winds, taking any spray drift particles with it.

How Clouds and Wind affect Inversions

Inversions are only mildly affected by light wind (e.g. 6 to 8 km/h), but as the wind increases and mechanical turbulence mixes the air, the strength of the inversion will be reduced and the atmosphere will approach a neutral condition (see the blue line). In this condition, airborne particles are not dispersed by thermal turbulence, but some mixing will occur. So, there may not be an inversion, but spraying would still be inadvisable if the wind got too high.

Therefore, extended periods of mostly clear skies in the evening or night when the wind is light means a high probability of strong temperature inversions. Conversely, cloud cover usually means a near neutral atmosphere, so no strong inversion. 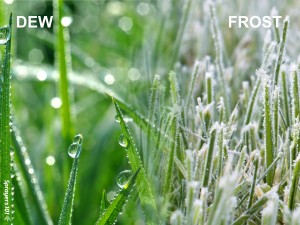 If you see fog, dew or frost, you’re already in an inversion. The air has become cold enough to condense or even freeze water.

Inversions form more rapidly when there is less water vapour in the air to absorb radiation. Once humid air has cooled to the dew point, water condensation gives off energy and warms the air a little. This slows the formation of the inversion. Be aware that inversion conditions can exist long before fog forms, so fog is not a good indicator for the beginning of an inversion – you’re already in one!

When you spray during an inversion, the larger drops fall quickly (per normal), but smaller lighter droplets fall very slowly (a few centimetres per second). The do not disperse. Instead, they move with the air they were released into, evaporating very slowly, over great distances. These small particles, as well as vapours from volatilizing products, are capable of moving for kilometers. 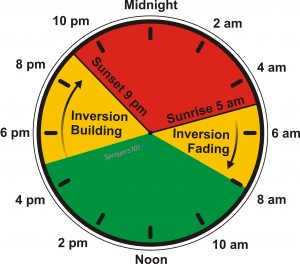 Inversions occur to some extent every day. It’s the intense and prolonged inversions we want to be especially aware of. On this hypothetical 24 hour clock, we see the inversion fades in the morning and grows in intensity through the evening. Do you spray in the morning or at night? Be mindful or pollinating insects, but when there’s a strong inversion, consider night/morning spraying over evening/night.

Inversions, once formed, persist until the sun rises and warms the Earth’s surface, or until winds increase and mix the stationary layers of air together, re-establishing a more neutral temperature profile. Therefore, spraying in the evening poses the greatest risk for pesticide drift when conditions favour inversions. Very early mornings (e.g. around sunrise) are not much better. Remember, at sunrise, the inversion will be at its maximum height.

The rising sun will warm the earth and create turbulent conditions, starting near its surface (e.g. a few metres). It takes a few hours of sun for the inversion to burn off to a sufficient height to adequately disperse once again. Most inversions will have dissipated two hours after sunrise, which may be the best choice for spraying.

The only sure way to know if you are in an inversion is to take two air temperature readings: the first about 10 cm from the ground, and the second about three metres off the ground. If the surface air temperature is cooler, you are in an inversion. The magnitude of the difference indicates how strong the inversion is. Accurate measurements are difficult to manage with conventional thermometers, so it is generally easier for sprayer operators to watch for the following cues:

If you suspect a strong inversion, don’t spray.

DOWNLOADFor more information on how weather affects drift, download this pamphlet from the Australian Government Bureau of Meteorology.