Katelyn is a professional agronomist and a farmer south of Regina. Katelyn's spraying experience comes from her own farm, as well as previous spray application on several farms throughout Saskatchewan. When she's not spraying, she's talking agriculture, politics, feminism and society. Follow her at: @FrmerAtHerTable and on her blog: http://www.farmerathertable.com/

Time and again, after years of working with dozens of different chemicals, I would wonder to myself “How dangerous is this chemical?”, “Is glyphosate as safe as they say it is?”, “How do I find out what type of safety gear I need while handling this chemical?”

Beyond the agrichemical dealer, ag. consultants, and university or government ag. extension specialists, a quick internet search reveals many sources of pesticide information. Collectively they identify the active ingredient(s) in formulated products, they detail which pests are best controlled by the pesticide, and they provide instruction for application. But it’s more difficult to find consistent, practical information about safe pesticide handling. Sometimes it’s excessive to the point of being impractical (try finding actual “chemical proof” gloves), and sometimes it’s minimal and vague – it depends where you look. No matter the level of precaution, pesticide safety is time consuming and involves some fussing, but it is the hallmark of responsible pesticide use. Just as we ensure that we are applying “safe rates” when spraying chemicals, we must also ensure we are respecting our own well-being while handling chemicals.

In Canada, the Pest Management Regulatory Agency (PMRA) is charged with protecting human health and safety by monitoring pesticides that are sold in this country. According to the Federal Pest Control Products Act all pesticides sold in Canada must be registered with the PMRA. There’s a very nice overview of how that process works here. It is during this registration process that pesticide handling precautions are identified for the label. Further classification may take place under provincial acts.

All pesticides are designed to disrupt, repel, control or kill living organisms, but when it comes to safe handling, insecticides receive the most attention. This is because herbicides and fungicides target biochemical pathways that only exist in plants or fungi. However, most pesticides can be hazardous if they are not handled correctly. The handling precautions that appear on the label are based on five factors.

This factor is the broadest way to categorize potential risk to the handler. Generally, herbicides and fungicides are considered safer than insecticides, but there are notable exceptions. Do not rely solely on the pesticide family when making decisions on pesticide handling.

The mode of action gives further detail into how a pesticide should be handled. Modes of action that inhibit biochemical pathways that exist in the target pest, but not in mammals (people, in particular), have lower acute toxicities. Examples include herbicides that inhibit enzymes involved in amino acid synthesis or in photosynthesis – these enzymes do not exist in mammals. However, once again, there are always exceptions. Do not rely solely on mode of action when making decisions on pesticide handling.

Pesticide formulation affects how a product can potentially be absorbed into the body. Emulsifiable Concentrates (ECs), for example, have higher rates of absorption than solutions or dry products. When it comes to the route of entry, dermal contact is considered safer than inhalation or ingestion. However, not all parts of your skin are created equal, and the point of dermal contact on the body matters a great deal.

Taken collectively, the first three factors form the overall toxicity of the pesticide. The level of toxicity cannot be predicted – it has to be tested. The LD50 (defined below) values that are reported for a pesticide come from standardized experiments such as animal feeding. Although the chosen species (usually white rats for mammalian endpoints) are known to be similar to humans in their response, there is still the possibility of error. Nevertheless, toxicity forms an important basis for establishing handling precautions.

People handle toxic substances every day. Household bleach, for example is surprisingly toxic, and yet it can be readily found on kitchen shelves in many homes. The risk of being harmed by a toxic product can only be determined by the likelihood of exposure. While it is possible someone might accidentally consume a hazardous dose of bleach, it’s improbable. Exposure does not just refer to a single exposure to a substance – repeated exposures to small doses of a toxic substance can have a cumulative effect. The goal when handling any pesticide is to minimize exposure, but it becomes even more critical when that pesticide is highly toxic. Together, exposure and toxicity form the basis for risk.

Studies have shown that exposure is greatest for handlers of agricultural pesticides during the mixing and loading phase of spraying. During this phase, the risk to the handler may be increased due to:

The main method of pesticide exposure is dermal, and many of the surfaces on a piece of equipment are already contaminated.

High exposure, resulting in immediate reaction due to a high dosage of pesticide exposure. The severity depends on the toxicity of the molecule and entry into the body (dermal, oral, eyes, etc.). The most common acute reaction is skin irritation, although in certain cases respiratory, digestive, and neurological systems may be affected. Organophosphate (e.g. Lorsban, Malathion) and carbamate (e.g. Sevin, Lannate) insecticides inhibit the cholinesterase enzyme, which is found in humans and affects nerve function. Frequent users of these insecticides undergo regular blood tests to ensure their levels are normal.

Chronic affects are more prolonged as they are usually due to lower doses of pesticide exposure over a longer period of time. Although some rare cancers and disruption of the reproductive system have shown to be related to this type of exposure, when the general population and farming population have been compared in studies, the farming population has shown an under-representation in the majority of cancers. In the cases were reproductive malfunctions were observed, a different cause of the malfunction, such as genetic offset, was most often observed in these situations. However, cancer types such as skin cancer and brain cancer were overrepresented in the farming community. A study in France has shown that the onset of neurological disorders in Agriculture communities shows a strong connection between Parkinson’s disease and exposure to pesticides.

The majority of information needed to safely handle pesticides is found on the label. Pesticide labels are legal documents, meaning they can be enforced by the federal government. The problem is that most sprayer operators rarely look at the label as they are not very reader friendly and easy to skim through. Most pesticide boxes even have the recommended rate, or acres/case on the side of the box now, so there is even less reason to look at the label.

LD50– the dose of pesticide in mg per kg of the test animals body weight that is lethal to 50 percent of the group of test animals.  For example, if the pesticide has an acute oral LD50 value of 1000 mg/kg, and the test animals each weigh 1 kg, then 50 percent of the animals would die if they each ate 1000 mg of pesticide at once.  A 100 kg animal would need to ingest 100,000 mg (100 g) of the pesticide for the same effect.  LD50 is often expressed by the route of entry – dermal, inhalation, acute oral (ingestion) are the main examples. 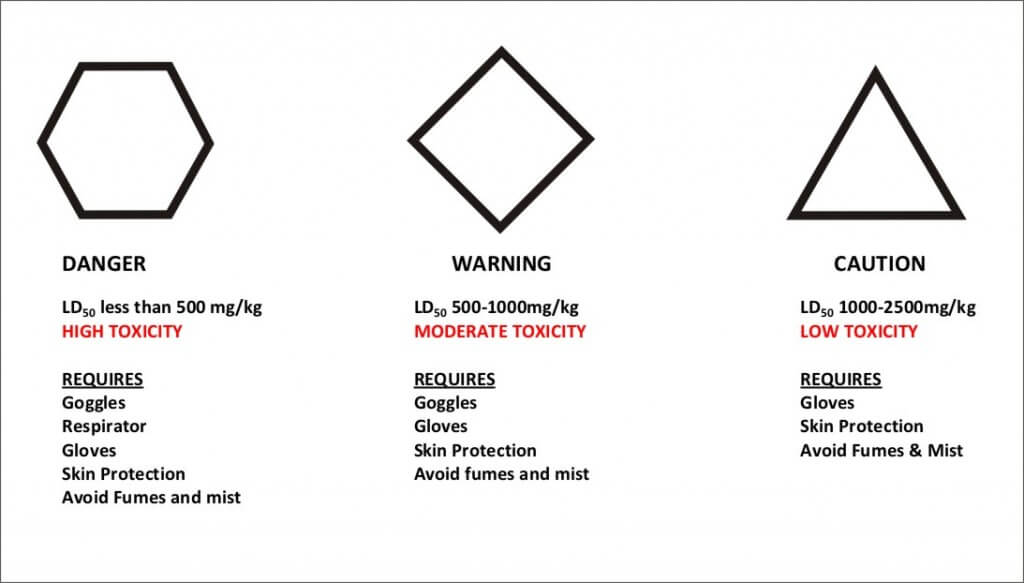 Degree of Risk and Hazard Symbols

The appropriate PPE for a job is determined by two factors

This encompasses all of the above information. In order for a pesticide applicator to avoid injury or the chances of adverse effects on the body, a pesticide applicator must be knowledgeable about pesticides. It can be overwhelming for an applicator to sort through all of the information on the label or on-line regarding pesticides. So much so, that most often applicators avoid the information altogether. Ongoing training and learning will ensure that they are effective in their work. Many aspects of pest control change continuously, as new studies are conducted on the effects of pesticide exposure.

The Material Safety Data Sheet (MSDS) is available for all pesticides registered, and these are usually linked on manufacturers’ websites. It can be eye-opening what types of toxicity tests are done, and what the results are.

Denial that pesticides can potentially cause harm is also a major flaw in the behaviour of applicators. Maintaining a safe work environment and practising personal safety will reduce the chances of an applicator experiencing serious injury throughout their farming career.

There is very little certainty in toxicology. For one, most testing is done using acute oral and dermal dosing. Basically, toxicologists expose test animals to the neat active ingredient and watch what happens. There is a lot of missing information – what about formulant like solvents, and surfactants? What about synergies in tank mixes? Some, but not all of these, undergo testing. We also have much less information on chronic (long-term) effects, and can only simulate these in quasi long-range tests. In addition, toxicological methodologies and statistical approaches can vary, and we should not be surprised that some reports disagree, and that there are outright conflicts between toxicologists and epidemiologists (scientists that study patterns of health in populations). Regulators are aware of these shortcomings and often use safety factors to account for them. But those of us that use these products regularly, the message is simple: be cautious, and protect yourself.

Disposable nitrile gloves are the product of choice for handling pesticides. But one of the most common problems with the use of gloves is cross-contamination. You’re handling product with your gloves on, touching containers, hoses, valves, and couplers. When you’re done, you climb back into the cab where you take off your gloves. Later, someone climbs up into the cab to talk to you, using the railing and operating the door handle without gloves. Guess what’s on their hands? Even later, you put away the hose without gloves and return to the sprayer. Now it’s on the steering wheel and all the levers. There are a few solutions:

If you would like to learn more about pesticide safety, or to obtain pesticide application training, the Pesticide Applicator Licence can be obtained from the Ministry of Agriculture. This course offers in depth, valuable safety information for applicators, as well as general knowledge for pesticide applicators. The Pest Management Regulatory Agency provides workers, employers, and the general public with a wide range of pesticide information. The PMRA can be contacted from anywhere in Canada toll free at: 1-800-267-6315

Download this Quick Reference Guide for commonly used herbicides. Print, laminate and post it at the fill station or pesticide storage area for easy reference.