In 2016 we asked the Twiterverse to play along as we wrote sprayer poems in the form of haiku. The response was tremendous, and the poems were so well done. We scooped them up into an article called #SprayerHaiku.

Well, we couldn’t help ourselves. On a nostaglic impulse, we did it again in 2017 and our Twitter followers rose to the occasion with a new batch of thoughtful Haiku! While we admit that a few people miscounted the syllables (5-7-5) their efforts make them worthy of a reprint 🙂

The best submission, @HortGuy85, won a Sprayers101 Mug! Granted, it was his Yoda meme that put him over the top. You’ll have to read all the way to the end to see it.

modify water,
use the proper adjuvants,
droplet on target
(@edakag1)

(To the tune of Red Solo Cup)
Their green soybeans cupped,
I shouldn’t have filled you up,
Their lawyers’ party!
(@ZRAgri)

Roses are red,
Violets may be blue,
They need spraying too
(@HortResearchKTT)

Assume tomatoes
Will be injured if even
They smell dicamba
(@ontariotomato)

spray on autosteer
but watch for field obstacles
****, down for repairs
(@ontariotomato)

Driving sprayer fast
Does not save as much time as
Filling, cleaning fast.

Single tank rinse
After spraying dicamba
Too much residue 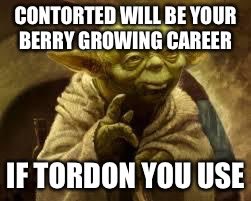 Thanks for that @simonlamacraft
Interested parties can grab a copy as a free eBook or interactive PDF at https://www.sprayers101.com/airblast101

There's a print-on-demand option too if you cover whatever shipping costs from Arizona.

If your gang at the café have the musical licks, maybe you can tackle this one next:
https://sprayers101.com/paint-it-black/

You’ll find this and more of his great work at http://Sprayers101.com

Yes, use of low volumes is a problem for fixed amount loss such as priming and cleaning. The whole exercise shows that we need to revise sprayer plumbing from the ground up.

The lowest rate results in the highest wastage in percentage terms overall. The low rate being the only one where priming wastage is significant.... low rates a good case for recirculation? https://twitter.com/nozzle_guy/status/1351307375316148224