Managing the canopy of any perennial crop (e.g. pruning, hedging, leaf stripping, etc.) is an important consideration. The benefits are manifold: It affects the health of the plant, the quantity and the quality of the yield. It allows light and air to circulate and it keeps the crop manageable. From the perspective of an airblast sprayer operator, the reason for canopy management is quite simple:

Picture this: It’s late April, and an apple grower and I are calibrating his sprayer. We achieve excellent spray coverage in the target block, shake hands and part ways. In late May I get a phone call from the grower. I assume it’s time to adjust his settings to match the growing canopy, but no… he had called to say he suspected apple scab in one of his blocks. Since I was the last person to adjust his sprayer, the unspoken implication was that I’d better come fix matters.

As I drove back out to his orchard, I considered what the problem might be:

Maybe it was ego, but I couldn’t believe it would be the calibration. We left ample volume to provide sufficient coverage to get the grower to petal fall. We ensured the spray swath was higher than top of the tallest tree, accounting for wind and an uneven alley. We did everything right to match the sprayer to the canopy and leave enough buffer to get to petal fall.

When I arrived, he took me to a block I hadn’t seen before. We didn’t calibrate the sprayer to match this particular group of trees, but he figured since they were about the same height, the sprayer would do its job. It was immediately obvious to me what the problem was, but I knew if I simply told him outright, the lesson might not stick. And so, with respect to that old proverb, I taught him to fish rather than give him one. We spent the next few hours trying to fix our alleged calibration problem by exploring:

Of course, none of these adjustments had any great impact on coverage because the problem was that the alley had grown so tight that branches were brushing the cab of the tractor (see picture). 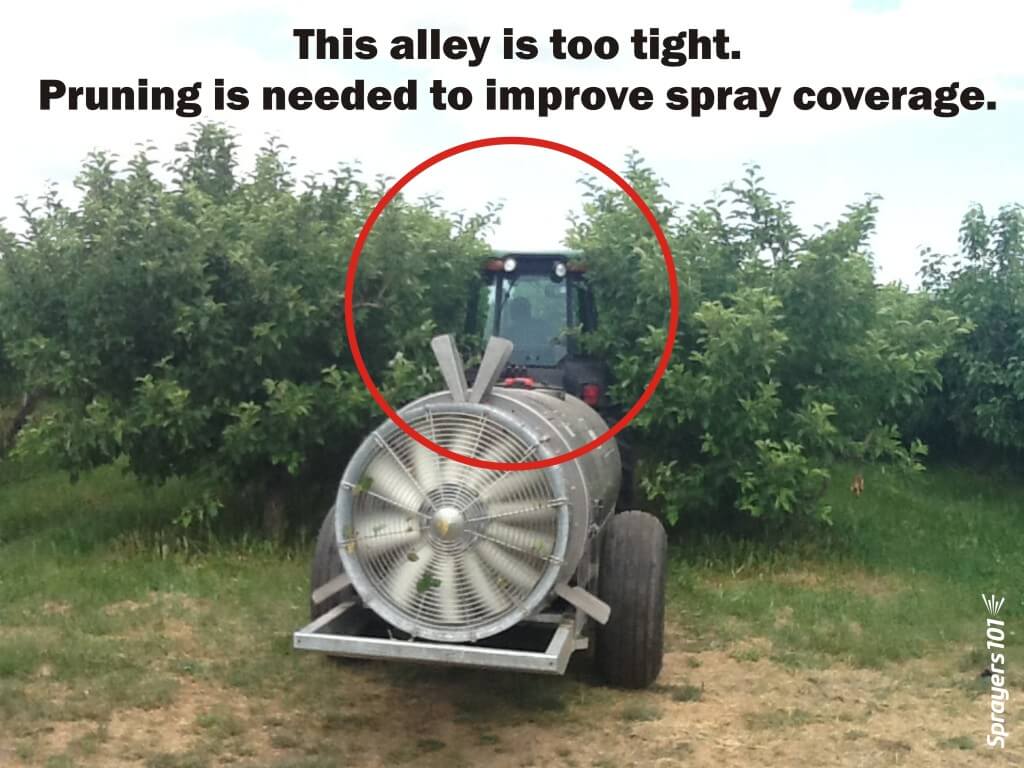 If the canopy is brushing against the tractor, it may intercept spray before it expands fully. Essentially, it temporarily blocks nozzles.

The canopy was so dense you couldn’t see the trunk! I asked the grower to move the sprayer down the row to a tree I saw that was far less dense that the others. We returned the sprayer to our original calibration settings and achieved excellent coverage once again. The only solution was to prune the trees, and once his workers did this, coverage improved considerably. An airblast sprayer can only do so much. Sometimes it comes down to canopy management. 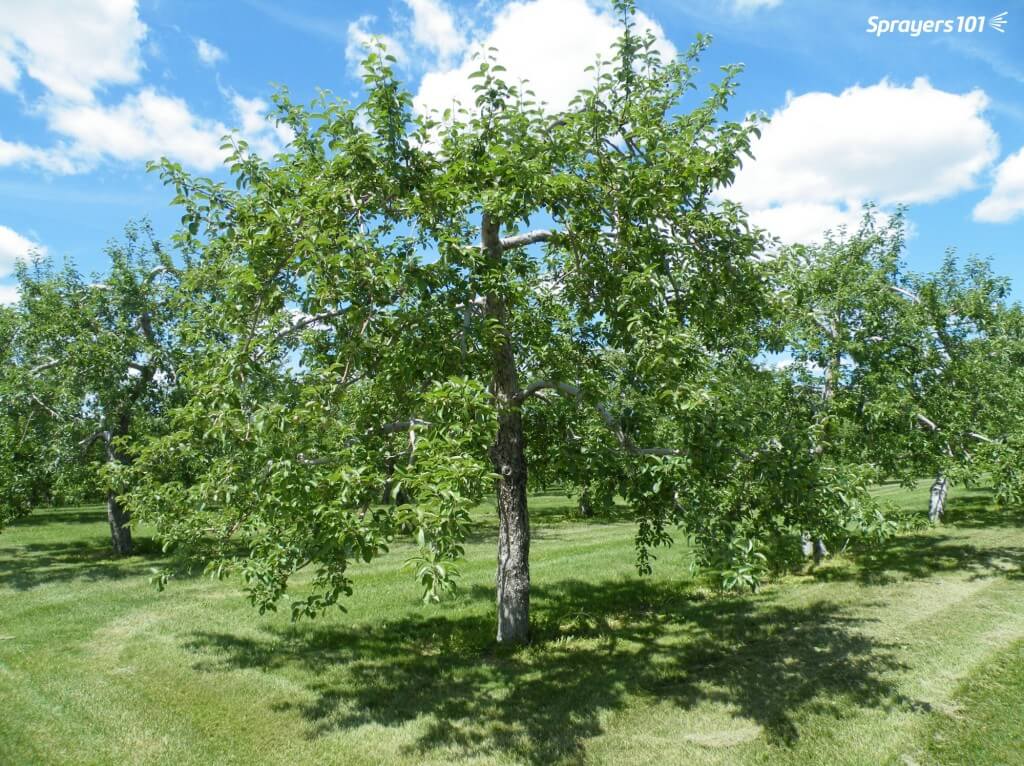 An orchardist taught me this trick: If you want to know if spray will penetrate a canopy, you should be able to see the trunk.

An orchardist taught me this trick: If you want to know if spray will penetrate a canopy, you should be able to see sunlight through the shadow at high noon.

Canopy management isn’t just an orchard issue. For high bush blueberry crops, coverage problems may stem from insufficient pruning. How can spray reach the lower, inner portion of a mature bush to control spotted-wing drosophila if the canopy is too thick?

Sometimes it’s not the canopy, but the plant and/or row spacing. Many nurseries arrange container crops, shrubs, whips and cedars as tightly as possible. This may optimize how many plants will fit on a given area, but it compromises sprayer access (due to the reduced number of alleys) and may cause plants to block one another from the spray. Nursery sprayer operators often use cannon sprayers to throw spray over and through all those rows of plants, but cannon sprayers produce excessive coverage at the beginning of the swath and increasingly erratic coverage as a function of distance. 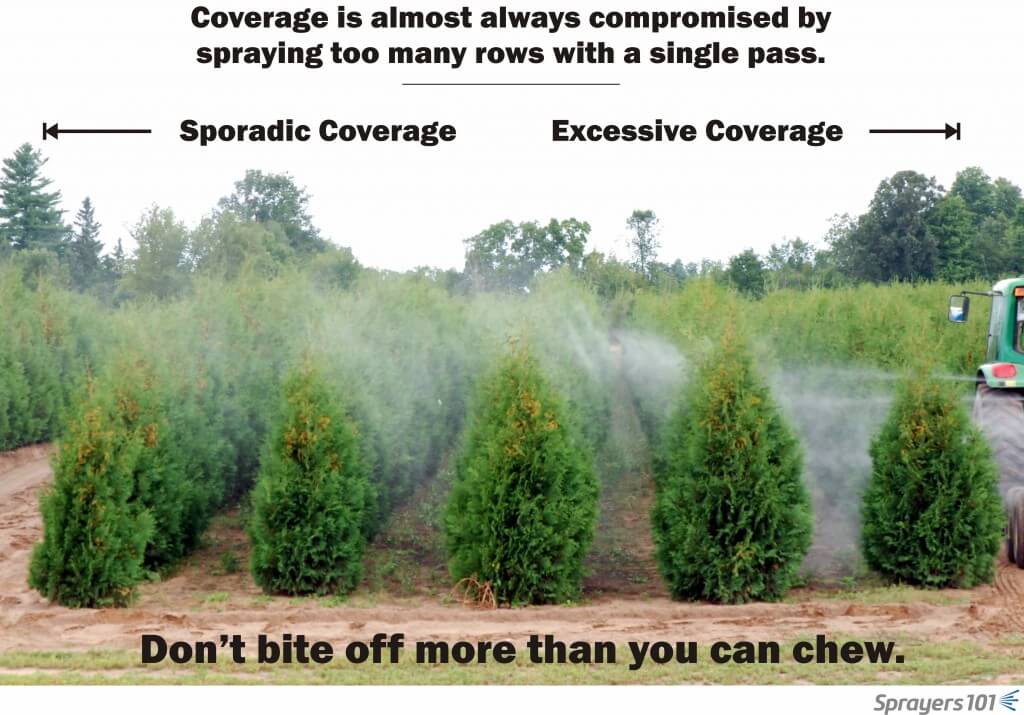 A cannon sprayer attempting five rows of cedars. This sprayer will eventually spray in from the other side, but experience has shown that coverage will be compromised in the centre rows and excessive in the outer rows. Spraying multiple rows may save time, but coverage is almost always erratic. 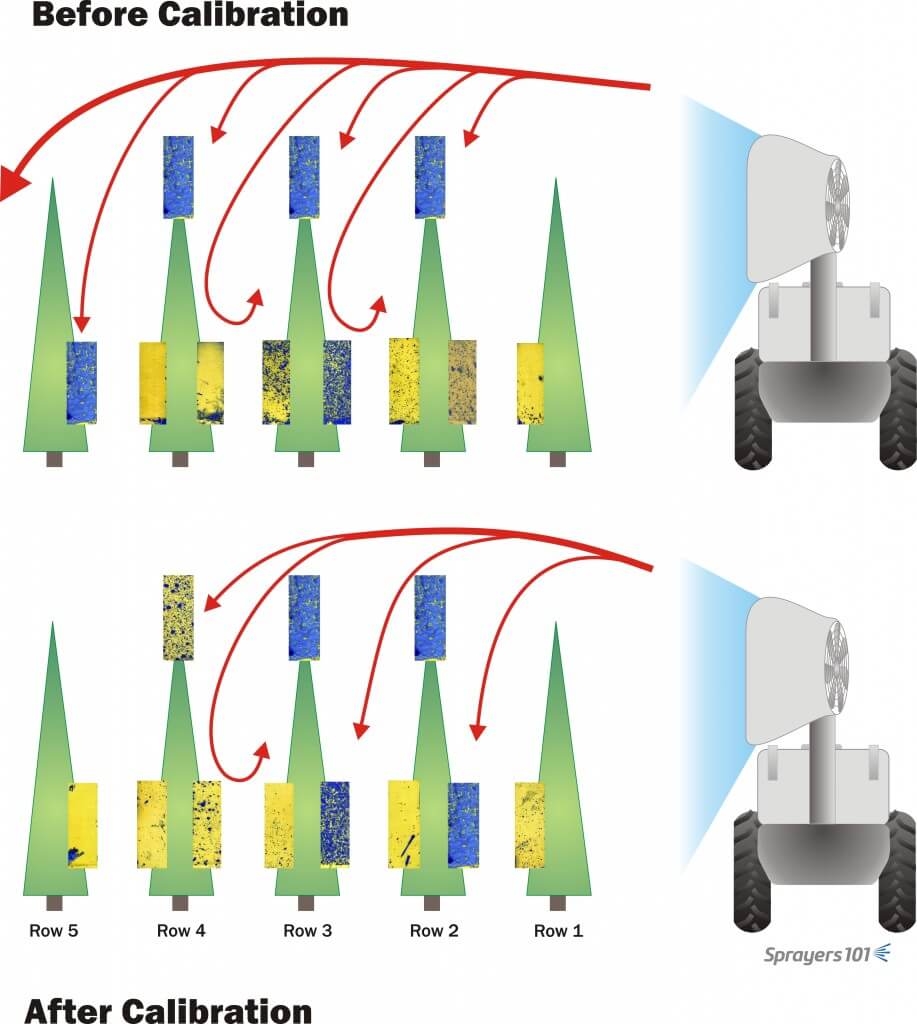 Calibrating a cannon sprayer can greatly improve coverage consistency. Before calibration (above) the sprayer was equipped with full cone nozzles in the upper boom positions and excessive air was employed in an attempt to force spray through the canopy. Although the sprayer would eventually pass down the far side of the five rows, only the water-sensitive papers in the tops of the trees indicated suitable coverage, and a great deal of spray simply blew away. After calibration (below) considerably less air and spray was used, and coverage on water-sensitive papers placed lower in the trees and facing the sprayer was more consistent. Remember, the sprayer would eventually pass down the far side, resulting in similar coverage on the remaining papers. Don’t bite off more than your cannon sprayer can chew – the further spray travels from the sprayer, the harder it is to achieve consistent coverage.

Coverage can be improved by reducing the distance the spray has to travel (i.e. leaving more alleys and reducing the density of planted rows). 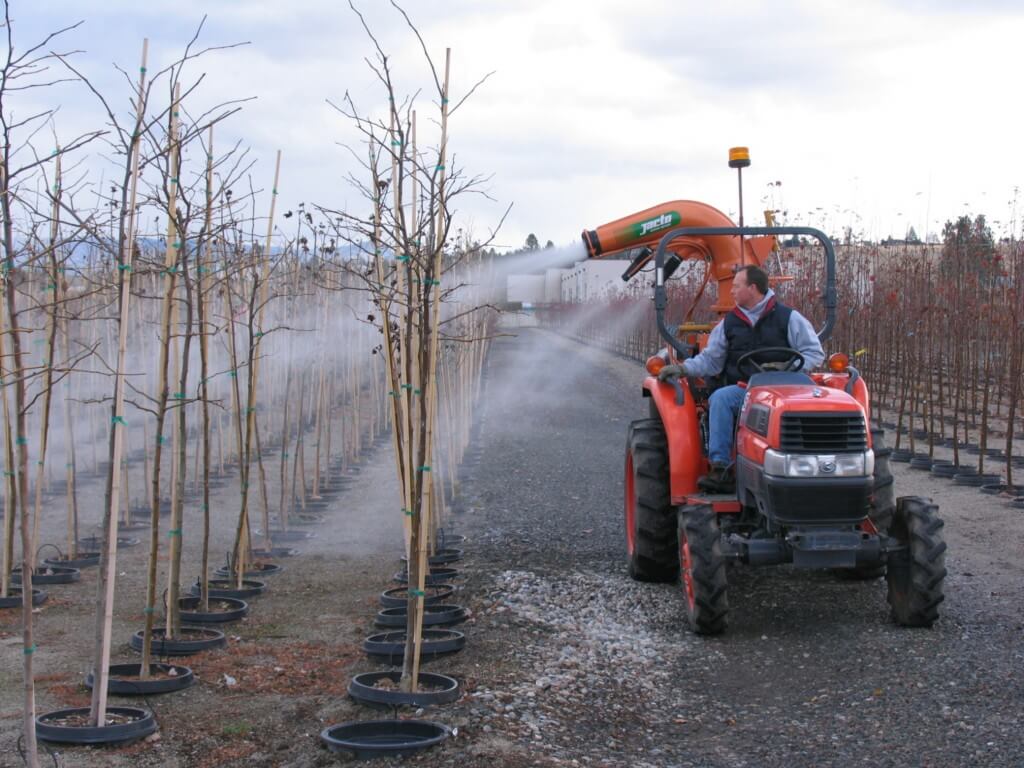 A Jacto cannon sprayer in a nursery. Many nursery and berry operations elect to spray multiple rows in one pass, but be aware that spray coverage suffers the farther away from the sprayer it goes. Independent research has shown that coverage is not reliable at half the distance typically claimed by many cannon sprayer manufacturers. This is a function of canopy density and weather. Always confirm coverage with water-sensitive paper. Photo Credit – M. Lanthier, British Columbia. 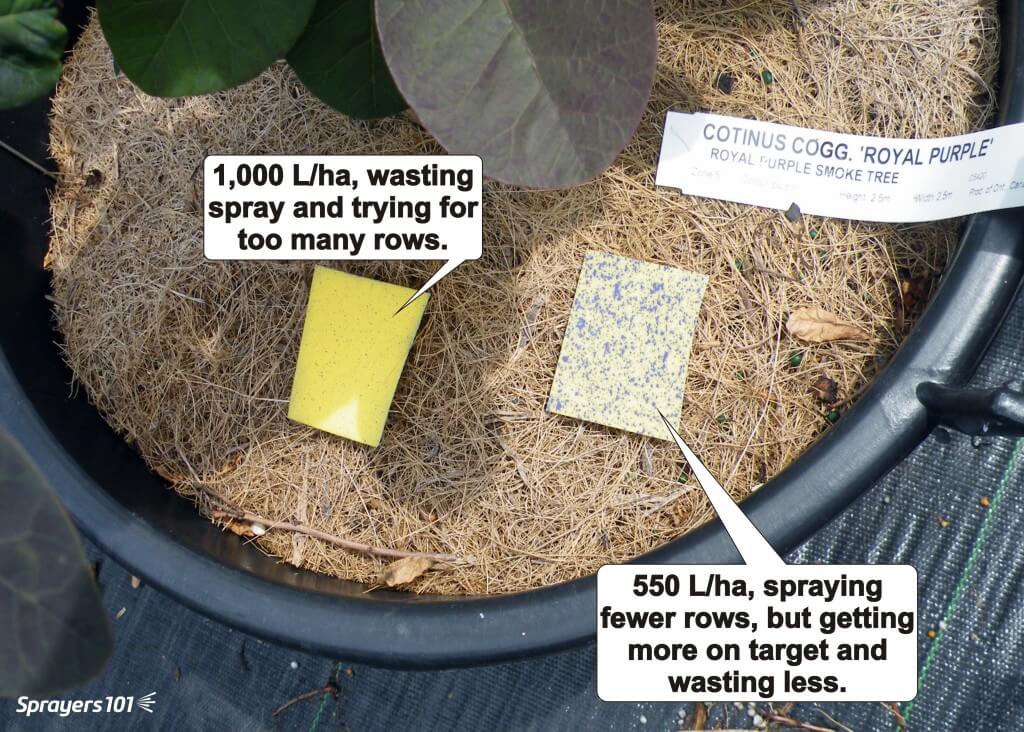 I also suspect that staggering plant spacing from row to row to reduce mutual shading might allow spray to penetrate more easily. As I write this, we’re planning to explore this concept in cedars. 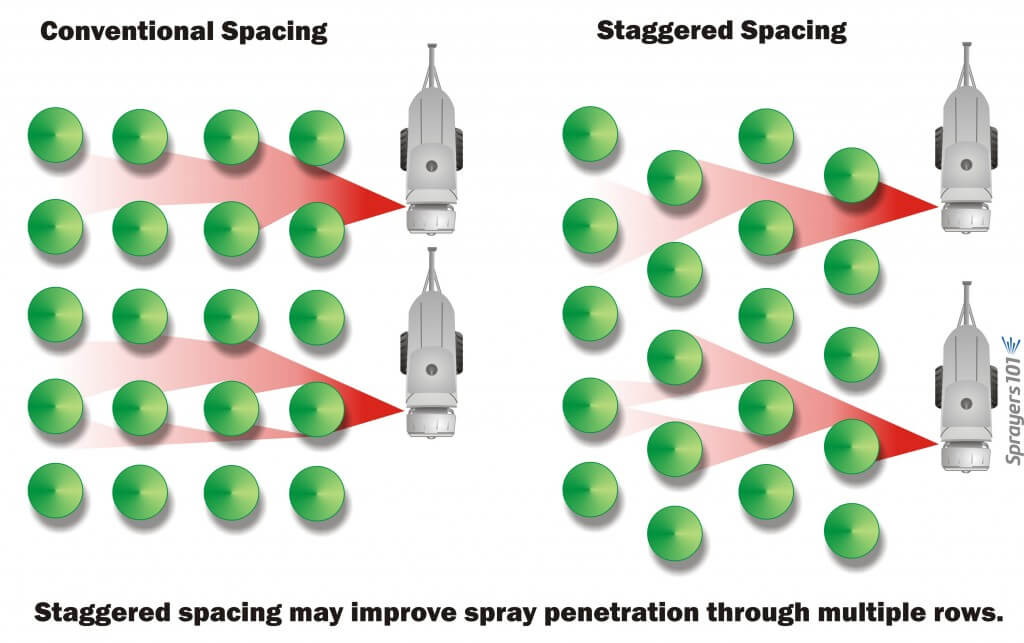 This is speculative, but the when nursery shrubs, trees and container crops are planted in perfect grids, mutual shading probably prevents spray from penetrating deeply into the planting. By staggering the spacing, spray may be able to penetrate more easily between rows. This can be accomplished without reducing the number of plants per hectare significantly.

In the end, try to see the spray target from the droplet’s point of view. If you can easily see where you want the spray to go, you’ll do well. If you can’t see the target, it’s far more challenging.

Thanks for that @simonlamacraft
Interested parties can grab a copy as a free eBook or interactive PDF at https://www.sprayers101.com/airblast101

There's a print-on-demand option too if you cover whatever shipping costs from Arizona.

If your gang at the café have the musical licks, maybe you can tackle this one next:
https://sprayers101.com/paint-it-black/

You’ll find this and more of his great work at http://Sprayers101.com

Yes, use of low volumes is a problem for fixed amount loss such as priming and cleaning. The whole exercise shows that we need to revise sprayer plumbing from the ground up.

The lowest rate results in the highest wastage in percentage terms overall. The low rate being the only one where priming wastage is significant.... low rates a good case for recirculation? https://twitter.com/nozzle_guy/status/1351307375316148224