Orchardists, nurserymen and hop growers share something in common – they want to get spray to the top of a tall plant canopy with as little waste as possible. The tops of trees, for example, are a primary site of infection as they filter spores from the air, so fungicide coverage is critical. Spraying the tops of high canopies (e.g. too high for over-the-row style sprayers) can be a difficult proposition.

Here are a few considerations:

In order to overcome these challenges, the traditional axial orchard sprayer is nozzled with a larger proportion of spray distributed at the top of the boom. The idea is to increase the odds of some spray making it to the top of the canopy. Often, full-cone nozzles are used to accomplish this. Of course, if an estimated 10% of the spray actually impinges on the top of the canopy, the rest goes… well, somewhere else. This shotgun approach is hardly an efficient use of chemical.

Another strategy is to crank the PTO rpm’s up to 540, throw the fan in high gear and blow the spray as high as possible. The problem is, by increasing air speed and volume to carry spray to the top, the rest of the canopy (far closer to the sprayer) gets overblown and spray shoots right through. Some overspray might hit the next row, but most ends up on the alley floor. If you doubt it, consider how white your pant-legs get when you walk an orchard after spraying kaolin clay.

Others, mistakenly, might elect to raise the operating pressure to >150 psi in the hope that pressure will drive the droplets in a straight line at higher speeds. Most airblast sprayers using hollow cone patterns create very fine spray quality, even at 100 psi. Raising pressure means the droplets get even smaller, and tiny droplets have very little momentum. Increasing pressure just makes the problem worse.

Here’s what we propose.

If using an axial sprayer, employ air deflectors at the top of the air outlet to channel air (and spray) more effectively. The commercially-available deflectors are often just flat sheets, and air hits the surface and spills over all edges. Image pouring water onto a dinner plate – it just splashes over any which way. Better to replace those deflectors with a set that feature side-walls to channel the air. Anyone with access to a break and some sheet metal can make their own, but ensure they do not stick out beyond the wheel of the sprayer or they could snag plants and trellises. Always aim to overshoot the canopy top by a small factor to compensate for unexpected gusts of wind – better to overshoot a bit than to miss. 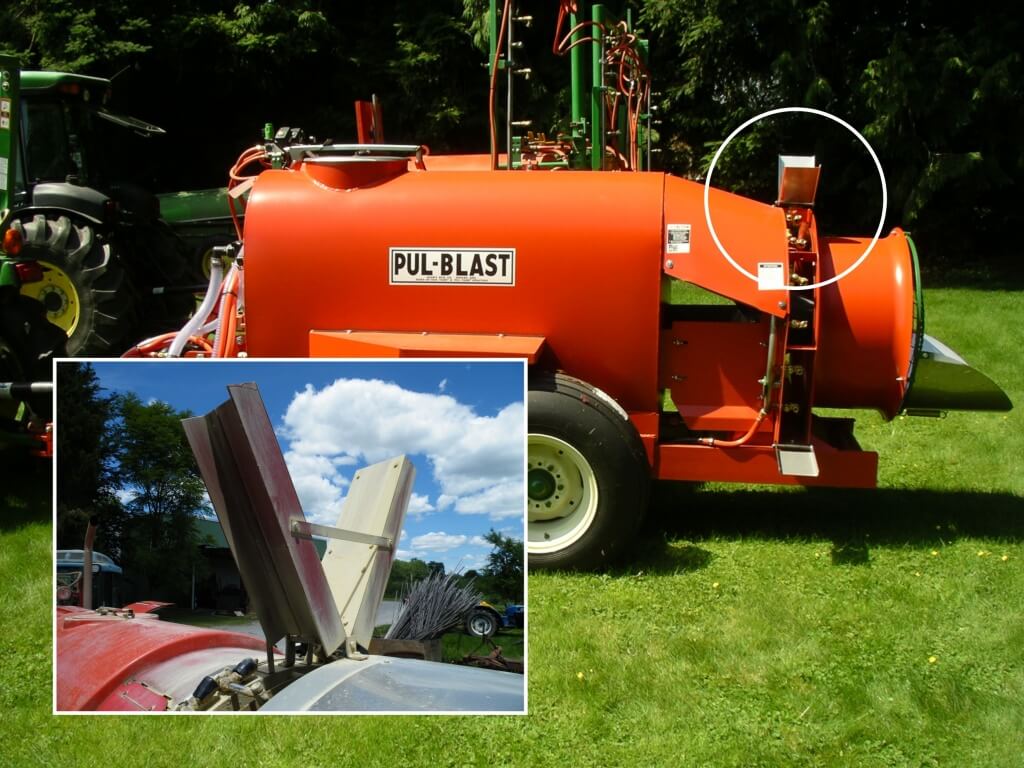 Commercial deflectors may or may not have channeling side walls. Inset: Homemade deflectors can do a great job. 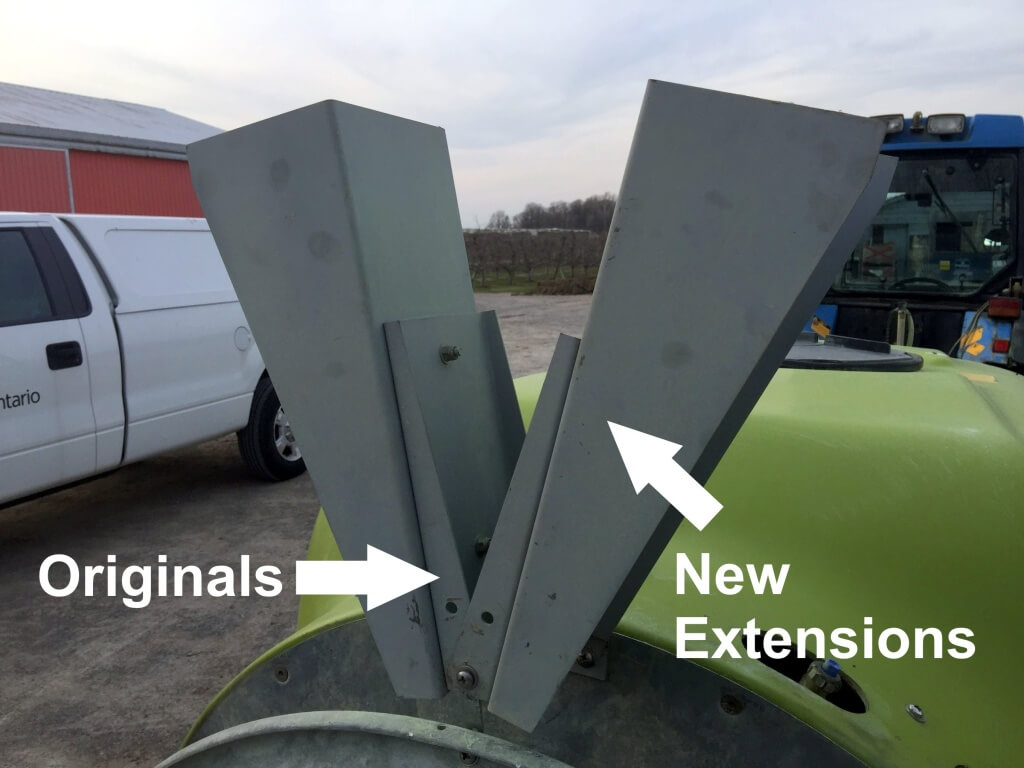 The original Munckhof deflectors were reversed, and a larger set of extensions were fabricated and attached.

Better than deflectors, some sprayers move the air and nozzles closer to the target via ducted tower assemblies. They work very well, but they must be as tall as the target you intend to spray. Even then, an uneven alley can cause them to rock and you might still miss some upper targets. Operators using adjustable towers or ducts might angle them back to aim the air (and spray) on a slight upward angle rather than parallel to the ground, and that can compensate for a slight height difference, but it begins to defeat the purpose.

Nozzle body on upper tower deflectors. Still some air assist and a good idea, but use air induction nozzles.

Some creative operators have attached additional nozzle bodies to the tower’s top deflector plate to aim it up in the top of the canopy. Still others have extended the wet boom itself higher than the tower. Unfortunately, although the nozzle is closer to the target (good) the benefit of air assist has been greatly reduced (bad). Air induction nozzles might help on boom extensions, per below. 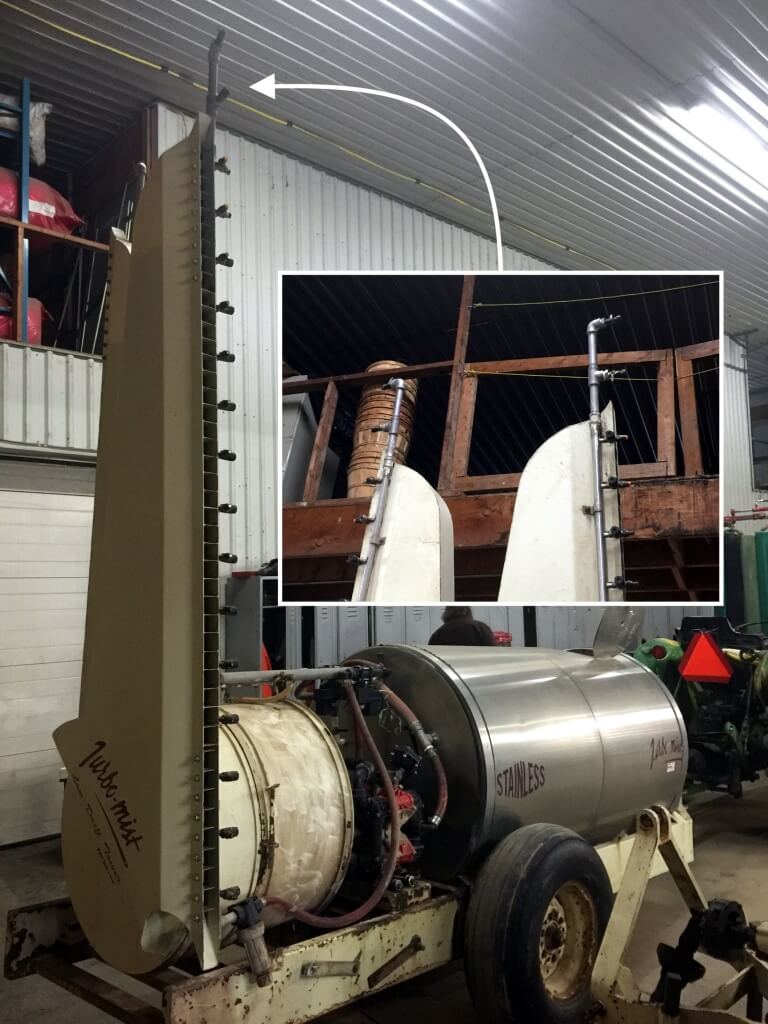 Wet booms can be extended to reach high canopies, but may no longer benefit from air assist. Consider using air induction nozzles in these positions.

Consider using air induction nozzles in the top two positions of each boom (totaling four per sprayer), with or without towers. There are three advantages:

No matter which strategy, or combination of strategies, you use to hit the top of the canopy, always confirm coverage using water-sensitive paper. Further, recognize that it’s very difficult to compete with high winds, so know when to wait it out.

Controlling your spray at the top of the canopy means better coverage and less waste. Plus, people won’t see this (wait for it).

Hello folks! If you would like to learn about the Orchard Tools app for iOS, join me for a demo on March 26th at 1 PM EST (2 PM AST). Lots of options to record data and especially helpful for fruit growth rate. Video shows how "handy" it is. Register now: https://www.perennia.ca/eventer/tools-in-the-toolbox-for-apple-crop-load-management/

Precision ag in apple orchards. More evidence that putting the correct dose in the right place is as, or more, important than a per-area-planted rate.

Wow. Super visual of how inversions suppress atmospheric mixing until the sun heats things up a bit.