This is part one of a two part article on how to adjust the air direction, and air speed/volume. If you’ve purchased a new airblast sprayer, you’re spraying a crop you’re not familiar with, or you are ready to reconsider your traditional practices, this is the article for you! When performed correctly, these adjustments are a qualitative form of calibration that will help you optimize the fit between your sprayer settings and the target you wish to spray. This amounts to better coverage and less waste.

It is important to emphasize that any adjustments are only as good as conditions during the adjustment. In other words, don’t adjustments made in low wind, high humidity and moderate temperatures to give the same coverage in high winds, low relative humidity and high temperatures. Droplets get blown off course and evaporate rapidly. Only make adjustments to the sprayer in weather conditions you would normally spray in. 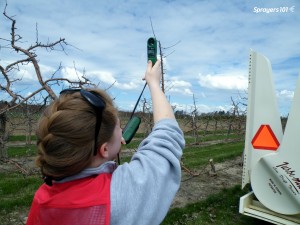 Handheld weather meters are convenient tools for measuring relative humidity, wind speed and temperature during calibrations and when spraying. The back-lit models are great for low light conditions. Take readings near the top of the spray swath.

I recommend using a handheld weather meter to monitor the conditions. Record those conditions along with your calibration notes (because really, sprayer adjustments are part of calibration). Local weather reports often don’t match the conditions in the planting. Hold the weather meter as high as you can – preferably readings should be taken at the top of a spray swath. Reading wind, for example at the orchard floor results in wind speeds approximately ½ that at the top of the orchard.

The weather conditions during spraying will affect everything, so only make sprayer adjustments in conditions you would spray in, or your settings may no longer be appropriate.

The air stream created by the sprayer fan (or turbine) carries the spray solution into the target (e.g. tree, bush, shrub, vine, etc.) and distributes it throughout the plant canopy. To reach all target surfaces, and the achieve adequate spray coverage, all of the air in the plant canopy must be replaced by spray-laden air. 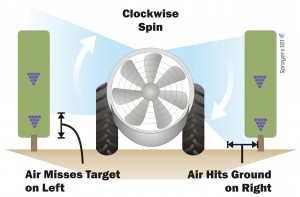 Without effective straightening vanes, some radial fans skew the air. Air hitting the ground can stir up leaf litter and dust, and may be a waste of spray. When it misses the lower part of a target, efficacy may be reduced.

The air direction is important. Research has shown that radial fans without effective straightening vanes or deflectors make the air go up on one side and down on the other. In extreme situations, this might compromise the spray job (e.g. miss the lower portion of the target on one side of the sprayer) or it might simply waste spray and stir up leaf litter and dust. Here’s how you can see if this is happening on your sprayer: 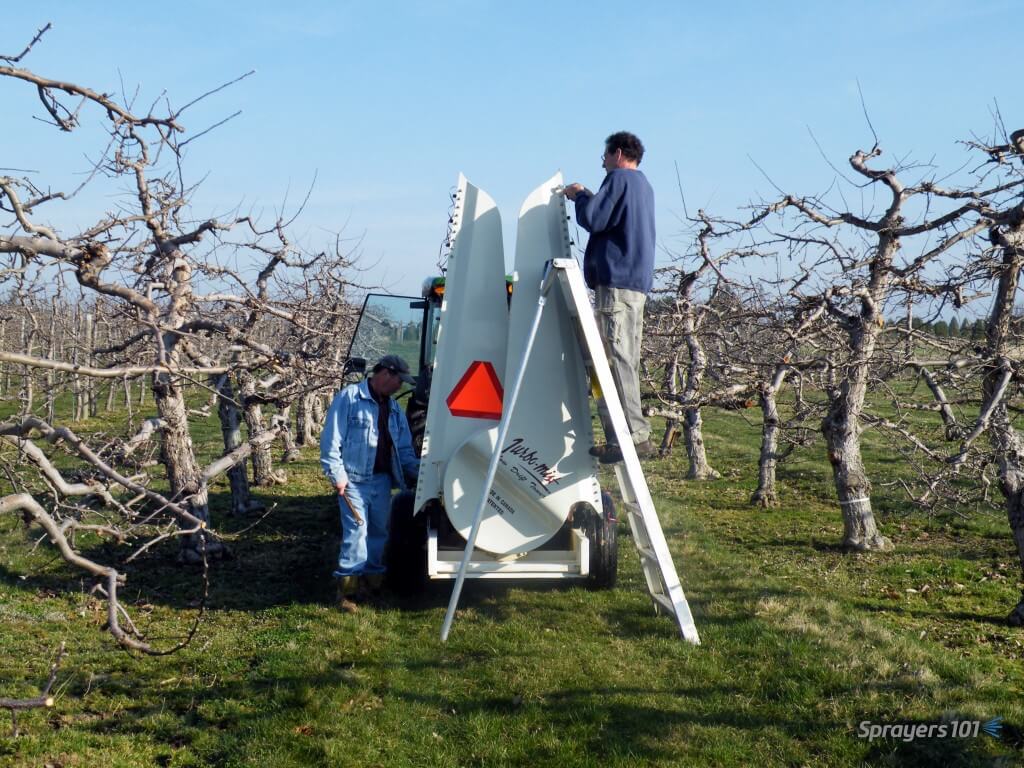 Using a ladder to tie ribbons to nozzle bodies on a Turbomist sprayer tower. 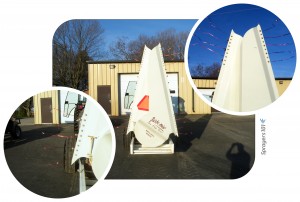 The ribbons show air direction relative the target canopy and reveal if the sprayer air is out-competing any ambient wind.

By observing the ribbons, you can extrapolate where the deflectors should be aimed. Adjust the deflectors to just over- and under-shoot the target canopy. Deflectors should not be optional on fan-equipped radial airblast sprayers – they should be standard equipment. Not only do they compress the spray-laden air into a tight stream that more easily reaches and penetrates canopies, but they can also prevent leaf litter and dirt from being stirred up. This helps to keep the fan blades and grill clean and reduces the potential for “sandblasting” on grape and berry crops.

For suspended airblast fans, such as over-the-row systems, the ribbons can still be used to adjust deflectors when present. Perhaps more importantly, be sure the air outlets do not point directly at one another (imagine looking down over the crop – they should not be at right angles to the row). Research in Quebec and experience in Ontario have shown that crop penetration will improve by orienting the outlets in any manner other than in direct opposition (e.g. one forward, one back or both forward, etc.). 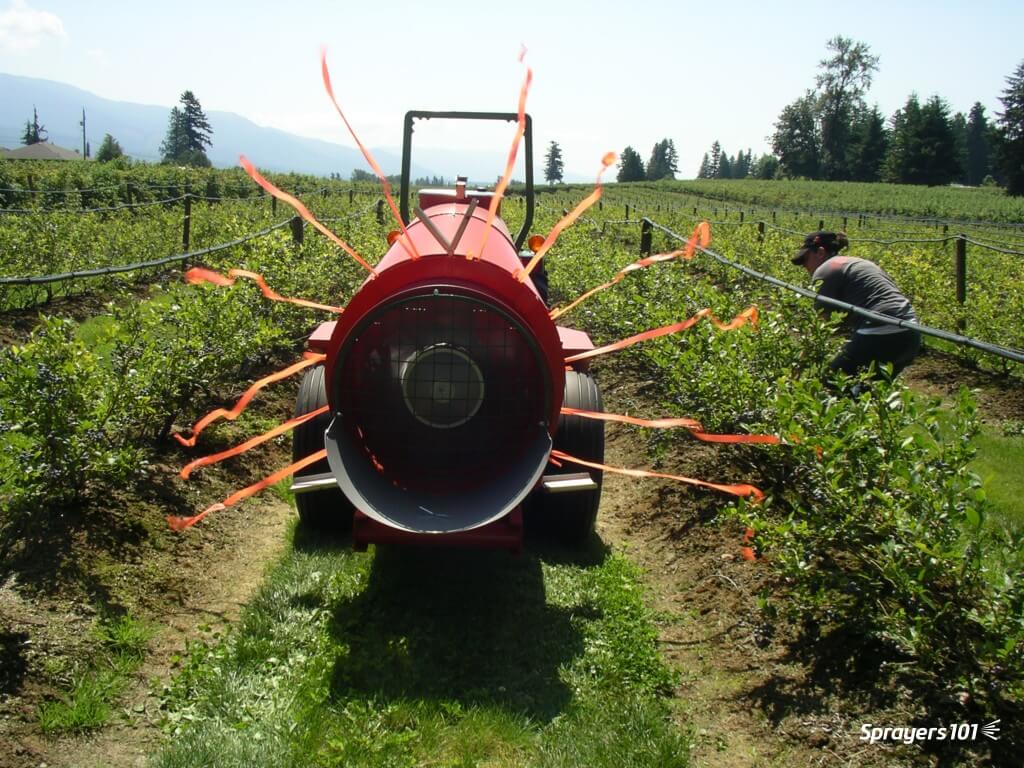 Ribbons tied to each active nozzle position will show where air (and spray) is aimed. Note the slight downward direction of the air on the bottom-left side of the sprayer versus the bottom-right. Don’t use flagging tape, as shown here. Not only will it stretch beyond 25 cm, but it often breaks. I once covered an orchard floor with orange flagging-tape confetti; it was funny, but not terribly informative. Use 25 cm lengths of strong ribbon instead. Photo Credit – M. Waring, British Columbia. 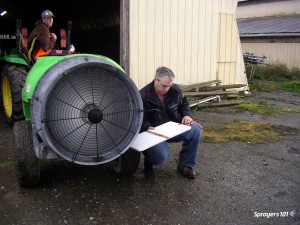 Using a piece of scrap wood with a ribbon on the end to demonstrate how deflectors would channel air on a Florida airblast sprayer. Once convinced, this grower fabricated and installed deflectors and has been very pleased with their performance.

For Turbomist sprayers without towers, upper and lower deflectors are not an option. Instead, the sprayers are designed to channel air using adjustable outlets. Note that the air outlet is not a uniform width – it’s widest about half-way down. Using ribbons to extrapolate air direction, aim the widest part of the outlet at the densest part of the canopy. This automatically repositions the booms as well, facilitating the next calibration step where we turn off nozzles that will significantly over- or under-shoot the target. This is discussed in another article.

Using a piece of scrap wood with a ribbon on the end to demonstrate how deflectors would channel air on a Florida airblast sprayer. Once convinced, this grower fabricated and installed deflectors and has been very pleased with their performance.

This process should be performed for EACH significantly different crop or block sprayed with the sprayer. Some operators dedicate sprayers to certain blocks to minimize the number of adjustments required. This may necessitate re-ordering the sequence in which blocks were traditionally sprayed. If that’s not possible, multiple set-ups might be needed to reflect block diversity. This can be minimized by grouping similarly-sized blocks together and calibrating to the worst-case scenario (i.e. the target with the greatest area-density). Smaller blocks may be slightly over-sprayed, but it’s still an improvement in efficiency. Record the set-up for each sprayer/block combination and keep a copy in the tractor cab(s).

When repositioning the air outlets on a Turbomist with no towers, aim the widest part of the outlet towards the densest part of the canopy, then turn off unneeded nozzles. Lubricate the nuts and bolts that hold the outlet bands tight. 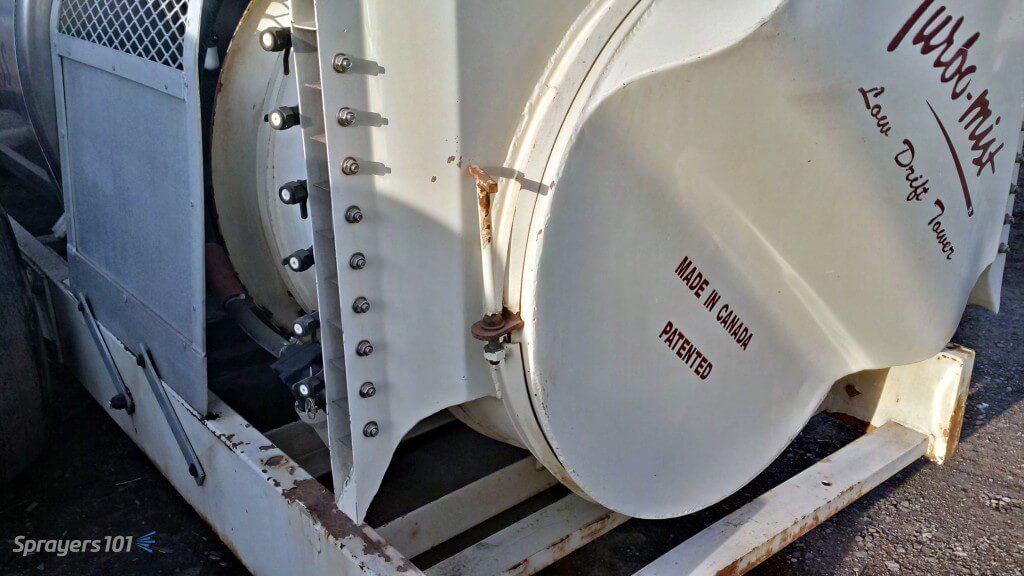 Never lubricate the bands themselves; this can cause the outlets to slip out of place as you drive. Keeping these bands clean is important, as sand caught between band and sprayer sometimes acts like ball bearings and may make it difficult to keep tower outlets firmly in place.

Imagine an operation with four blocks of cherry trees, each very different in area-density due to age, variety, pruning, rootstock, etc. (shown here top-down). If an airblast sprayer had only a single calibration, larger trees would be under-sprayed, and smaller trees would be over-sprayed. If the blocks were grouped by size and the sprayer was adjusted to match the larger blocks, two blocks would receive optimal spray coverage and two would be over-sprayed. With a unique calibration for each block, all trees would receive optimal coverage. It’s up to the spray operator to decide the best approach for their operation.

The right size sprayer for the job – thanks to Penn State, Univ. New Hampshire and Chazzbo Media (2014).

Calibrating the air on an airblast sprayer – thanks to Penn State, Univ. New Hampshire and Chazzbo Media (2014)