In August, 2016, we were contacted by a cut-flower grower specializing in Dahlias. There are photos in this article, but they don’t do justice to this beautiful perennial flower. Imagine a chrysanthemum crossed with a zinnia: lots of tight petals in the bloom. Unfortunately, they’re a perfect place for insects to hide.

Those that buy cut flowers may be some of the most discerning clients in horticulture. A scar on an apple may or may not cause the buyer to reject the fruit, but imagine leaning in to smell a beautiful white bloom only to see a black bug crawl out of it! For many, the revulsion is the equivalent of finding a hair in their food.

According to the grower, the 2016 season has been very bad for Thrips, which could easily exceed five per bloom even after spraying. The grower had the insect identified as “Western Flower Thrips” which, in Ontario’s greenhouses, are demonstrating resistance to chemical control. With such high insect density comes natural predators, such as Orius (the Minute Pirate Bug). While it does an admirable job hunting thrips, it must also be controlled because to the buyer it is just another undesirable black bug. You can learn more about these pests in here. Getting the contact spray in between all those petals is exceedingly difficult. The grower wanted to know how he could improve spray coverage deep in the bloom itself. So, we had a discussion. 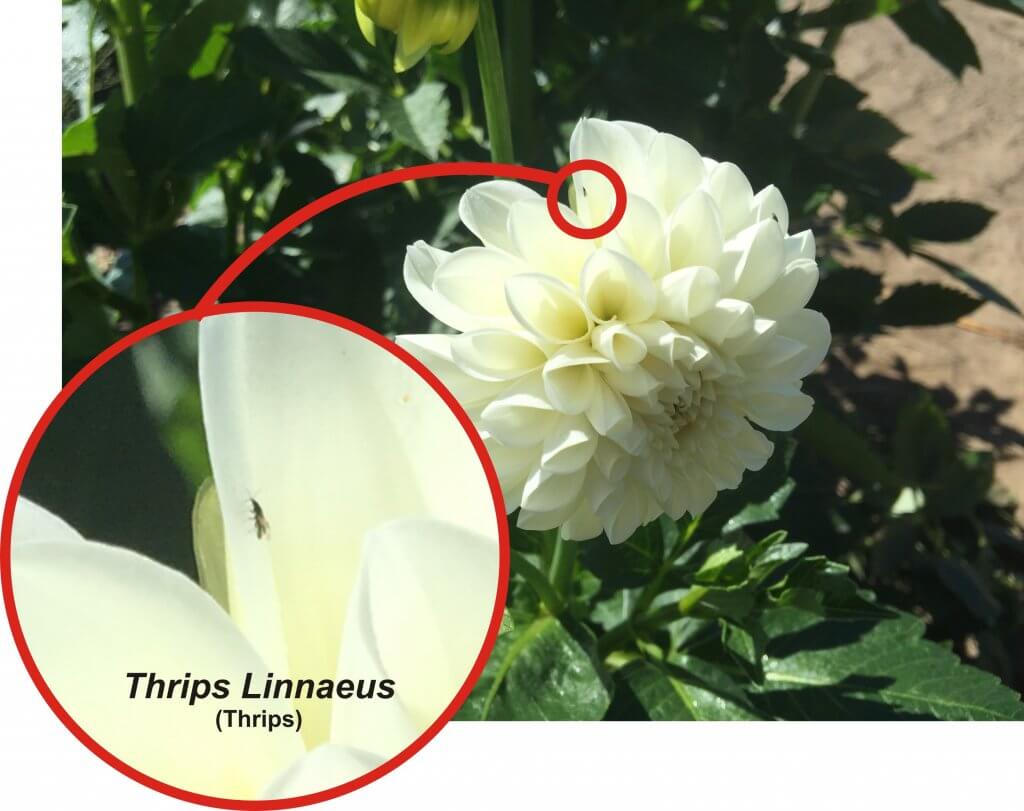 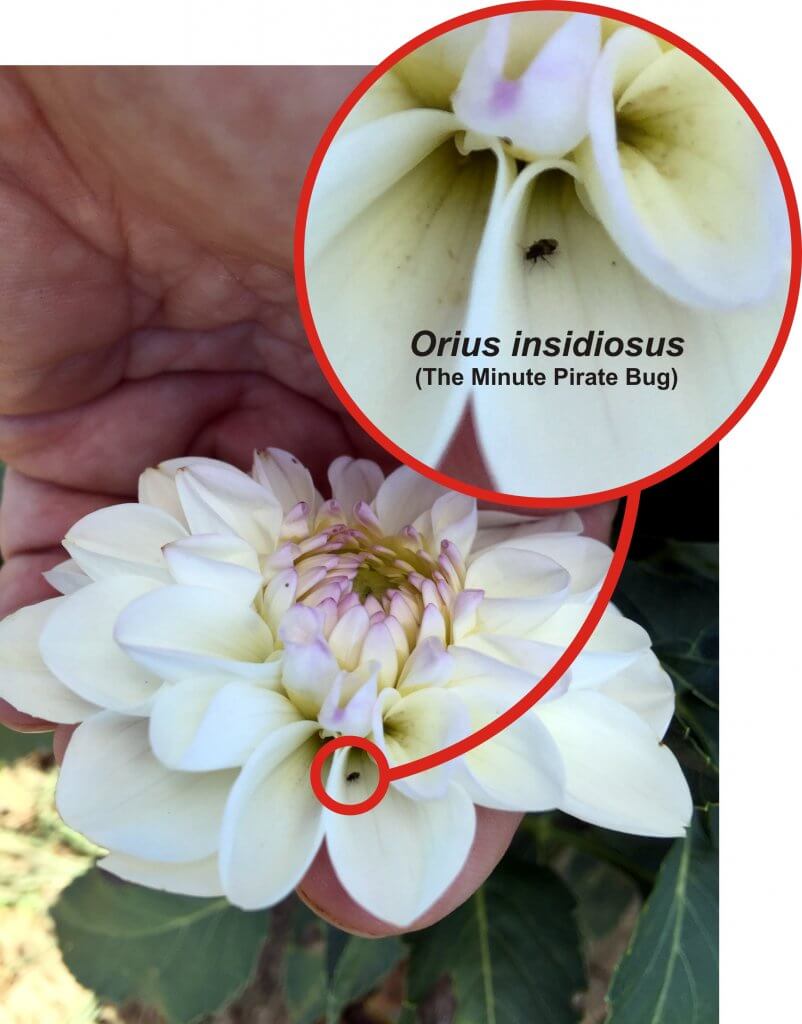 Adjuvants
Our first thought was an adjuvant. Wetting agents have been helpful for controlling thrips in other crops, such as those located deep in green onions in Ontario. We consulted the grower’s insecticide labels looking for possible incompatibilities. We found they had the potential to damage tender foliage if applied in periods of high humidity or high heat (i.e. > 25 °C). They also noted that the use of an adjuvant may increase the potential for damage. The grower confessed that he had already experimented with a non-ionic spreader and saw damage to the blooms. So, a water-conditioning option to improve spread was off the table.

Volume and travel speed
Our next idea was to increase the volume being applied per hectare. This strategy is a safe bet for improving coverage because it increases the number of droplets available for contact. There are a few ways to achieve higher volumes, but we elected to drive slower, which has the added advantage of reducing drift.

Spray angle
We also talked about spray angle. Dahlia blooms face horizontally in all directions, not vertically (i.e. side-ways, not straight up). Consider the spray from the nozzle’s point of view: The spray from the grower’s flat fans would fall predominantly downward. Theoretically, most of it would settle on the upper edges of the flower. We wondered if we could use an angled spray to hit the blooms face-on and improve penetration into the bloom. 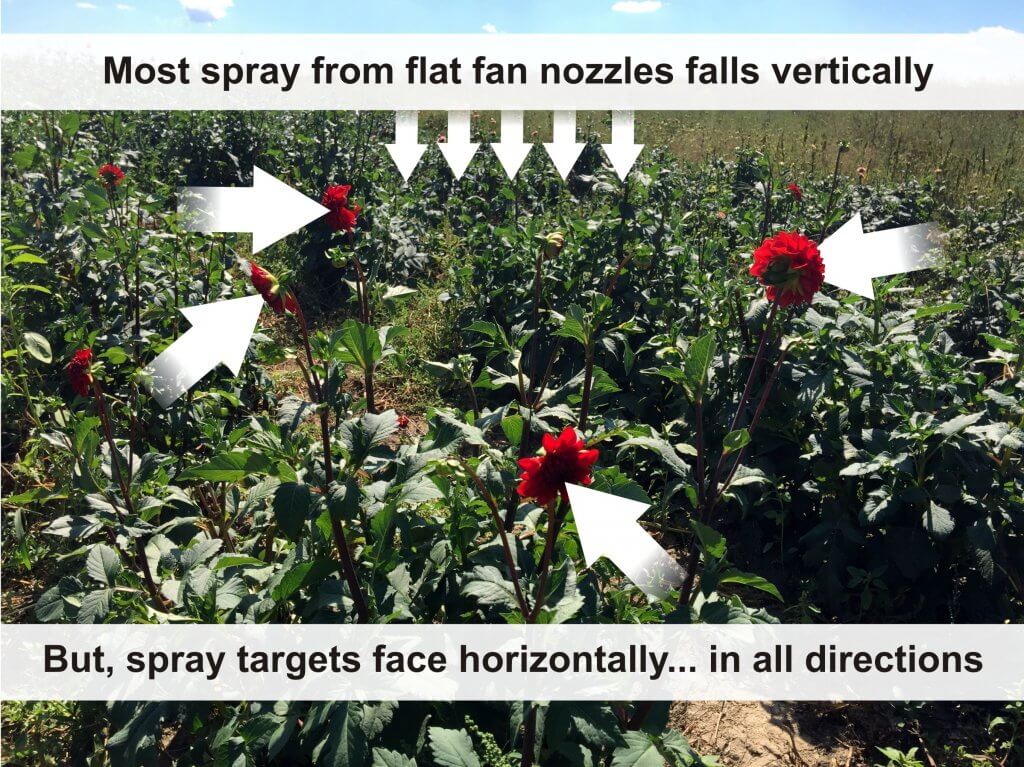 We felt twin fans and asymmetrical fans weren’t an aggressive enough angle, and they didn’t address the fact that the flowers faced in all directions. So, in order to get panoramic coverage on a near-horizontal plane, we decided to try alternating (one back, one forward) TeeJet Turbo FloodJets. They have been used to great effect by the University of Guelph’s Dr. David Hooker to provide panoramic coverage to wheat heads, so perhaps they would help here.

To prove the principle, we decided to run a short qualitative trial to see if there was a difference. 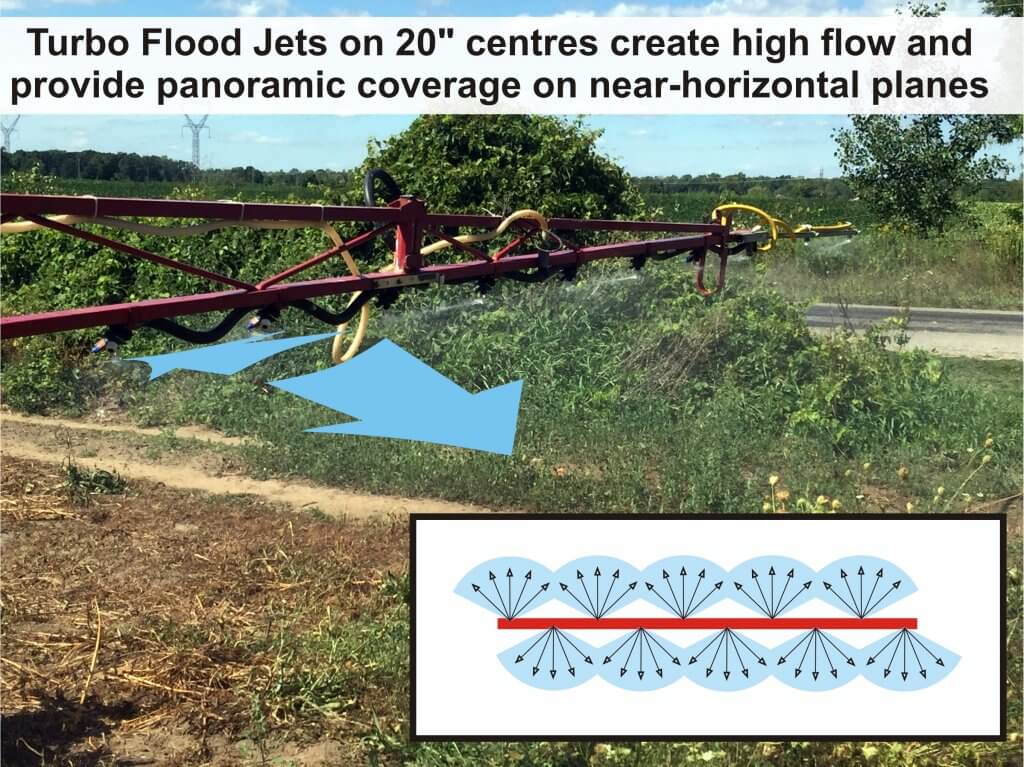 We cut water-sensitive paper into strips and slotted them into the blooms. By orienting them in multiple directions we hoped get a visual indication of bloom coverage. Plus, when they were extracted after spraying we could see how deeply the spray penetrated the bloom.

We weren’t sure if we were seeing an appreciable difference in bloom coverage, but it looked promising. In retrospect, they may have been more effective indicators if we’d oriented a few flat against the bloom face. We decided to use the nozzle arrangement for a few insecticide applications and see if there was a difference in efficacy.

The grower sprayed in the evening and returned the next morning to perform counts in 20 random blooms from each treatment. Normally, a scout looking for thrips would tap the bloom over a piece of white paper to do counts, but the grower’s method was to blow into the bloom. He said Thrips and orius climb out to the edges of the petals immediately and can be counted. We sprayed in the white Dahlia to make the counts easier. We did this twice. The counts were less than spectacular and we were disappointed:

Conclusion and next steps

The grower reported that even though we raised the volumes by slowing down, the efficacy from his flat fans had not improved compared to what he was doing previously. Adding insult to injury, the Turbo FloodJets (which were spraying twice the volume as the flat fans) did not seem to improve matters. Before we could try another approach, the insect pressure fell and the season drew to a close.

Why didn’t we see improvement? Perhaps the boom was too high and the spray from FloodJets fell vertically. Perhaps the spray quality from the FloodJets was too Coarse. Perhaps the grower’s method for counting insects was biased or inaccurate. It’s all speculation. As we pointed out earlier in this article, this hardly constitutes a formal experiment. We were hoping to see some indication of improvement before designing a more intense study. We didn’t see one, but, we’re not giving up.

Next season we will try again, from June to August, when thrips and orius counts are highest. We will use drop-arms to suspend nozzles at bloom-height. We will use a split nozzle body to mount two back-to-back full-cone nozzles in each position. They will alternate 180° along the boom aiming in front-to-back and left-to-right orientations to provide panoramic coverage using a Medium spray quality. And, we will engage a scout in a blind study to eliminate bias and increase our sample size.

Why publish an article that didn’t pan out? Because you can learn as much from what doesn’t work as what does. We’ll be sure to update this article when we run next year’s trials.

Thanks to the grower co-operator, and TeeJet Technologies for providing the water-sensitive paper and nozzles for the study.