Tom Wolf is based in Saskatoon, SK and has 30 years research experience in the spraying business. He obtained his BSA (1987) and M.Sc. (1991) in Plant Science at the University of Manitoba, and his Ph.D. (1996) in Agronomy from the Ohio State University. Tom focuses on practical advice that is research-based to improve the efficiency of producers. He also rides a unicycle to the office every day.

In conventional liquid metering, the liquid is forced through a metering orifice that is placed in-line.  This could be an orifice plate for liquid fertilizer, or a flat fan nozzle for pesticides.  Rate control is achieved by altering the spray pressure. It is usually impractical to change the nozzle or metering orifice during an application.

The main drawback to this approach is that spray pressure is not very effective at changing flow rates due to the square root relationship between spray pressure and flow rate.

For example, with reference to the table below, one can see that doubling the spray pressure (say, from 30 to 60 psi) only increases the flow rate by 40%. Tripling the pressure (from 30 to 90 psi) increases the application volume by 73% (we can call that a factor of 1.73). As a result, the use of pressure alone doesn’t offer a large range of application rates, and we accept a factor of 2 to be the limit for fertilizer streamer and broadcast nozzles (meaning a four-fold pressure range) and a factor of 1.73 to be practical for broadcast pesticide sprays over a 3-fold pressure range.  Any wider application volume range would require adjustment to travel speed.

With these inherent limitations in flow rate capacities from hydraulic pressure alone, applicators are often forced to use wide pressure fluctuations to achieve reasonable rate responses.  In some cases, this means that pressure needs can be too low for uniform distribution, or too high for pump or plumbing capacities.

There are a few options available that expand the flow rate range of liquid products.  Some of these have been available for a number of years, others are just entering the market for 2016. A brief overview of the main options follows:

This nozzle design uses a spring-loaded plunger to exert force on a flexible nozzle cap, deflecting it slightly.  The deflection changes the orifice size, allowing for a change in flow.  As a result, the flow rate response to a pressure change is increased dramatically. A single VariTarget nozzle equipped with a blue or green nozzle cap can deliver flows ranging from 0.2 US gpm at 20 psi to 1.2 gpm at 65 psi, for a stunning 6-fold change in application rate.

The main drawback of this nozzle is the poor metering accuracy of the system. In calibration tests, flows from various new VariTarget nozzles operated at the same pressures varied by more than 10% in many cases.  While this amount of variability may be acceptable in liquid fertilizer application, it is not considered acceptable for pesticide application.

These metering assemblies, new for 2016, offer an elastomer (EPDM) metering plate whose orifice diameter expands with pressure, offering a wider range of flows.  There are no moving parts in the assembly.  Four models are available.

PTC-VR:  Using a push-to-connect design for planters and toolbars, it offers versions that accomodate 1/4″, 5/16”, and 3/8” OD tubing diameters

Both units feature a pressure range of 10 psi to 100 psi, within which a flow rate range of approximately 8-fold is possible.

SJ3-VR: This unit generates three streams and operates over a pressure range of 20 to 100 psi, offering a flow rate range of about 4.5.

SJ7-VR: Generating seven streams and operating over a pressure range of 30 to 80 psi, this unit allows a flow rate range of about 2.9.

In all cases, the realized flow rate range is significantly greater than would have been achieved with pressure change alone. TeeJet has tested the flow rate variance among units operating at the same pressure and has found them to be acceptable, according to company representatives.

This 6-stream fertilizer nozzle, set for release in 2016 or 2017, has an internal mechanism similar to the VariTarget nozzle design, using a spring-loaded mechanism to change the metering orifice size. This nozzle does not use an elastomer orifice, and its metering is proving to be accurate and repeatable. A three-fold flow rate change is achievable at pressures ranging from 15 to 60 psi.  Three sizes will be available:  VFR ESI 015-04, VFR ESI 5-08, and VFR ESI 10-20.  Each will feature a pressure range of 15 ro 60 psi, within which it offers a 3-fold flow rate range.

Fertilizer banding has greater tolerances for application because pattern width is less important, and also because stream stability is less affected by pressure than spray pattern droplet size.

PWM utilizes conventional plumbing:  a single boom line and a single nozzle at each location.  Liquid flow rate through each nozzle is managed via an intermittent, brief shutoff of the nozzle flow activated by an electric solenoid that replaces the spring-loaded check valve.  Typical systems pulse at 10 Hz (the solenoid shuts off the nozzle 10 times per second), and the duration of the nozzle in the “on” position is called the duty cycle (DC) or pulse width.

100% DC means the nozzle is fully on, and 20% DC means the solenoid is open only 20% of the time, resulting in the nozzle flowing at approximately 20% of its capacity. This is illustrated in the figure below.  The ability to control the duty cycle is referred to as pulse width modulation. 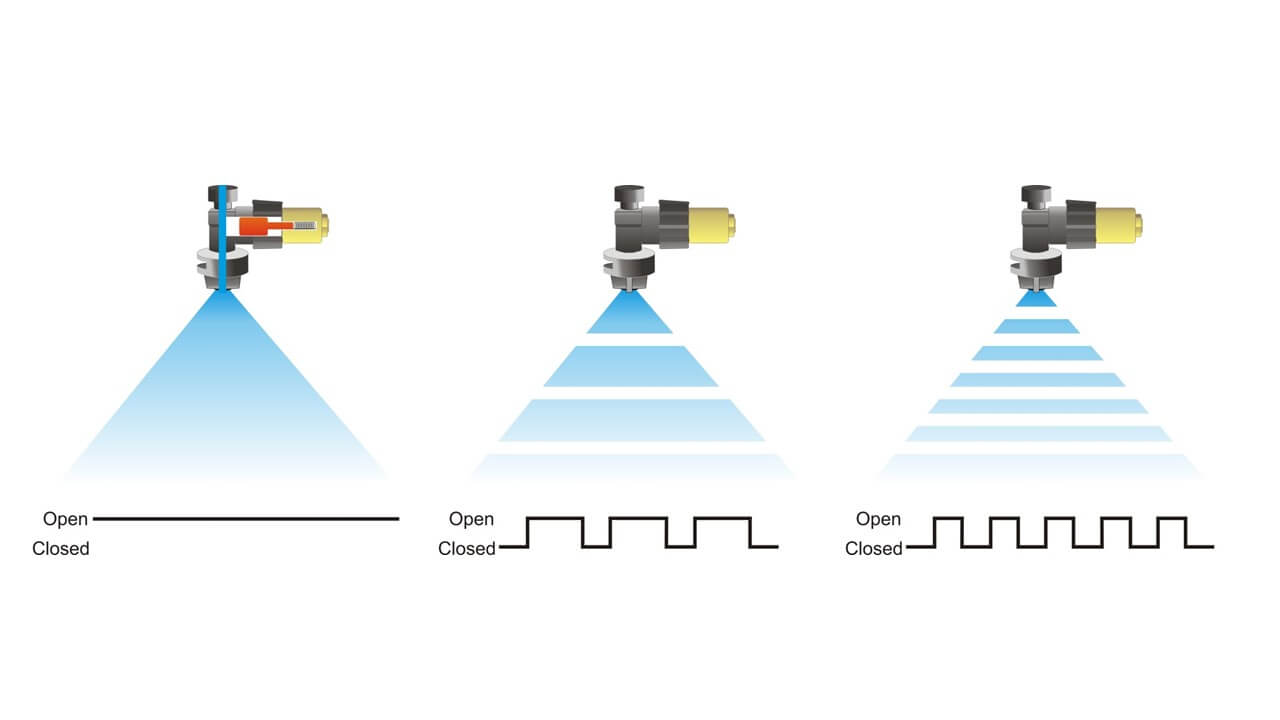 The system has a theoretical flow rate range of about four- to five-fold. Within this range, spray pressure, and the corresponding spray pattern and droplet size, stay roughly constant.  This makes it ideal for variable rate pesticide application, where spray patterns and spray quality are critical for performance.

The main disadvantage of this system is cost. Although highly accurate and dependable, commercial sprayer units are priced between $15,000 and $30,000 per sprayer, depending on features and boom widths. Competition may lower costs, with three systems available for 2016. The available systems are Capstan Sharpshooter (as a retrofit to any sprayer), Case AIM Command (made by Capstan for Case, factory instlled), Raven Hawkeye (retrodit to any sprayer, available as factory option on New Holland sprayers for 2017), and TeeJet DynaJet (available as retrofit). See our in-depth article on PWM for more information on these systems.

For ammonia and liquid fertilizer seeders or toolbars, Capstan recommends different PWM products, N-Ject NH3 or N-Ject LF. These systems offer more control over PWM pulse frequency and duty cycle and can achieve over 10-fold rate ranges.  At low frequencies and duty cycles, the mobiliy of the fertilizer in soil needs to be considered, as significant gaps in a stream can be generated.

A second boom fitted with different flow nozzles is installed, and is activated when the flow rate requirements can no longer be met with a single set of nozzles.  Once the second boom is activated, the spray pressure drops significantly and additional speed capacity can be realized.

A similar approach to the dual boom is available from Arag (Seletron) or Hypro (Duo React). These systems utilize a single boom and direct the flow through one of any two or four (Arag Seletron only) nozzles, or several nozzles at the same time.  Similar pressure fluctuations as with a dual boom would be experienced, requiring careful selection of nozzle flow rates to avoid large pressure jumps. The system can also be used to manually change from one nozzle to another as needed. In the figure below, the pressure changes associated with the sequential use of 015, 02, and 035 flows are shown. 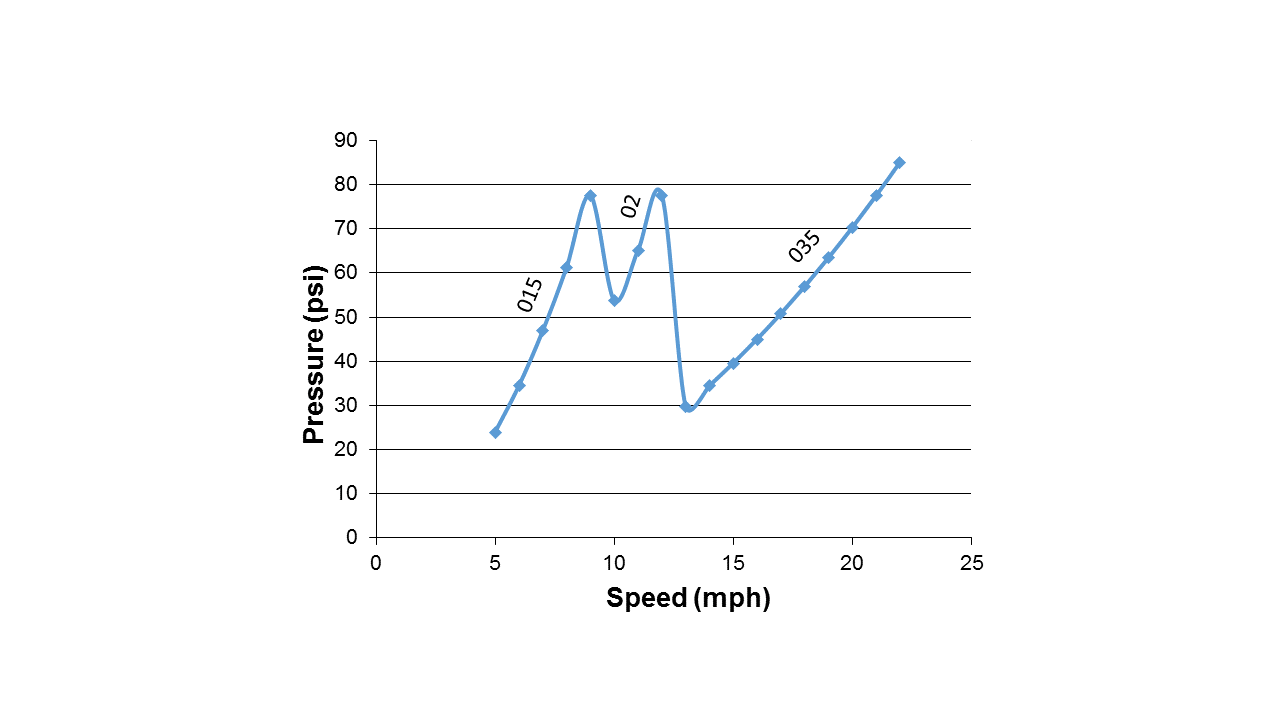 A single nozzle uses both liquid and air pressure to control liquid flow rate.  Liquid is delivered to the nozzle in the usual way, by pressure.  Air is also delivered, created by a dedicated air pump that has modest volume and pressure requirements.  Both air and liquid make their way through the same nozzle (a deflector style, similar to the TeeJet FloodJet). 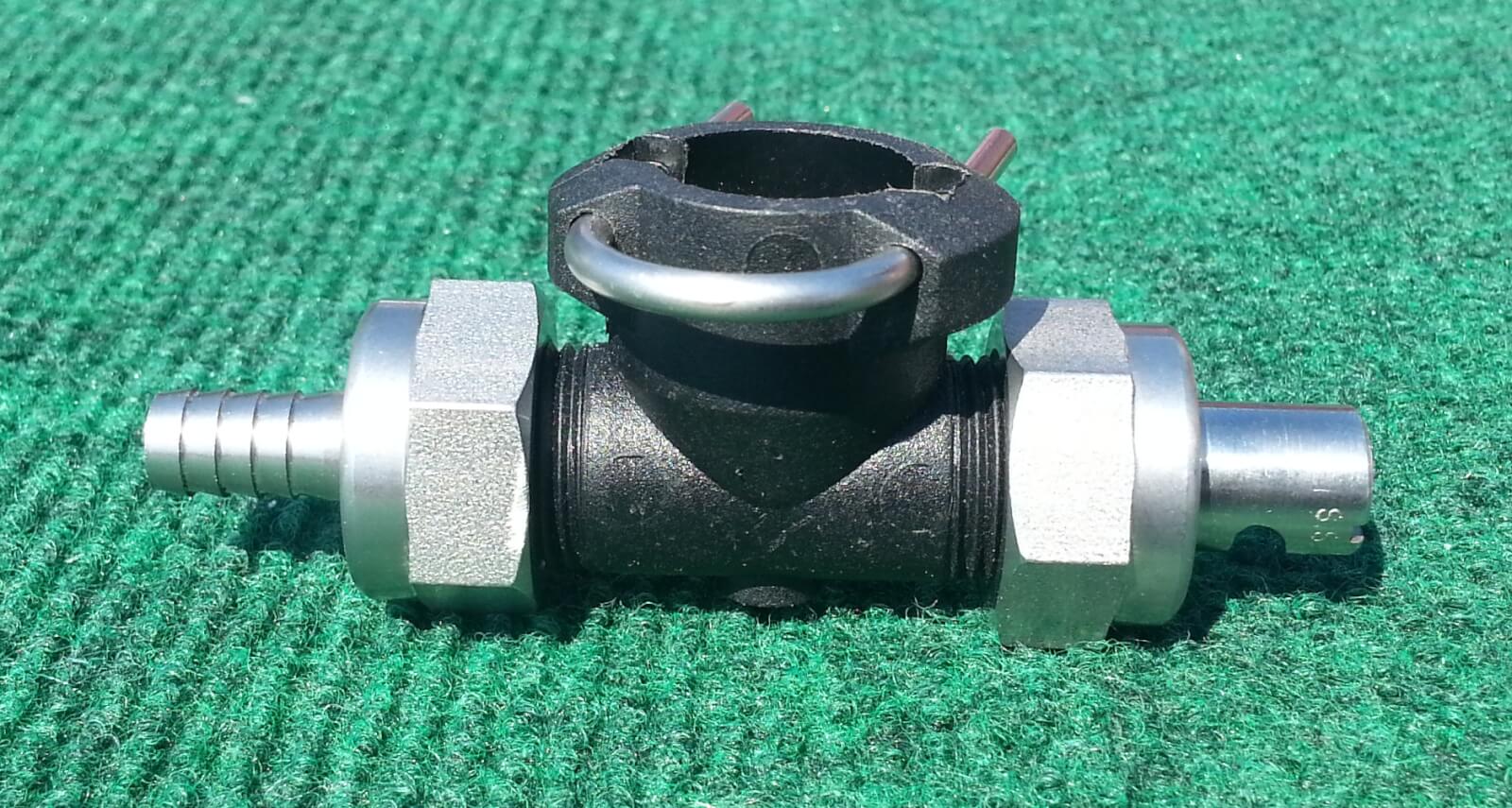 The advantage is that liquid flow, and droplet size, can be adjusted with air and liquid pressure.  More air results in lower liquid flow and reduces droplet size.  More liquid pressure increases flow.  Clever combinations of both can keep droplet size fairly constant over a wide flow rate range.  Alternatively, the nozzles can change droplet size while keeping the same flow rate, depending on the drift or coverage needs at the time.

Direct injection is an option for variable application of pesticides.  In this system, undiluted pesticide is placed into canisters on the sprayer, and plain water (or water plus adjuvant) is in the sprayer tank. The chemical is metered and introduced into the water on the pressure side at some distance upstream from the boom sections. The pesticide rate can be varied with the speed of the direct injection pump, offering a very high dynamic range of possible rates. For example, Raven’s Sidekick Pro (available on Case and John Deere sprayers) offers a 40-fold range of flow rates.

After injection, an in-line mixer ensures that products are evenly distributed in the carrier.  The amount of lag in the systems will depend on the amount of spray mixture in the plumbing upstream of the nozzles, the total boom flow rate, as well as the boom section configuration.  With a variable rate map this lag can can be anticipated and accommodated.

Pump technology has improved the metering accuracy over a range of viscosities. However, dry formulations remain a challenge as slurries can settle and create problems for the pump and screen components.