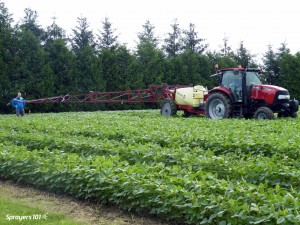 “I hear twin fan nozzles are great! Which should I buy?”

This is a difficult question because of the many factors that affect a spray droplet en route to the target. For example, demonstrations at Ontario’s 2013 Outdoor Farm Show showed that spray tends to deposit with the wind, regardless of twin fan configuration, with only the coarsest droplets depositing against the wind. This led me to wonder if I could do a down-and-dirty coverage experiment comparing the resultant coverage from several twin fan nozzles – maybe a leader would emerge? Before I could do that, however, I had a lot of reading to catch up on.

In 2002, Tom Wolf and Brian Caldwell attempted to isolate the critical factors by evaluating the impact of nozzle angle, travel speed, and droplet size on the “front” (facing the sprayer’s direction of travel) and “back” of vertical targets. They ran three laboratory experiments: spray configuration (single vs. double fan), ground speed (7.6 and 15.2 km/h) and spray quality (conventional versus air-induced droplets) using TeeJet XR’s and Billericay air bubbles at a rate of 175 L/ha. Here’s what they observed:

While compelling, these results were overshadowed by the fact that growers were not reporting improved efficacy with improved coverage. The authors wisely tempered the potential impact of improved coverage with overreaching issues such as crop susceptibility, disease pressure and product effectiveness. Their very practical conclusion was that applicators should strive for improved coverage, but only after integrated pest management (IPM) criteria such as product choice, crop staging and application timing are satisfied.

Meanwhile, David Hooker and Helmut Spieser were exploring nozzle configuration and sprayer set-ups to optimize folicur applications in wheat. For several years they ran field trials exploring panoramic wheat head coverage: not only the front and back of the wheat head, but the sides as well. Eleven different nozzle configurations were used:

David and Dr. Art Schaafsma worked with OMAFRA to explore nozzle efficacy. DON is a mycotoxin that may be produced in wheat infected by Fusarium Head Blight (FHB) or scab. There is an indirect relationship between wheat head coverage of fungicide and the reduction of FHB and DON: The higher and more uniform the coverage (with the right timing) the lower FHB and DON. In two field experiments they performed in 2008, DON values in the untreated checks were around four parts per million. DON was reduced by an average of 22.5% using a single flat fan, 23.0% using a TwinJet and 41.5% using alternating Turbo FloodJets when averaged across two fields, two fungicides and four reps (n=16). They all reduced DON significantly. There was no statistical difference between singles and twins, but control from the alternating Turbo FloodJets was significantly better.

Then, in 2012, Tom and Brian evaluated the newer asymmetrical twin fan nozzles from TeeJet. These tips are reputed to improve overall coverage at higher ground speeds because they decrease the contribution of the front-facing fan and increase the angle of the back. Their lab-based experiments determined that: 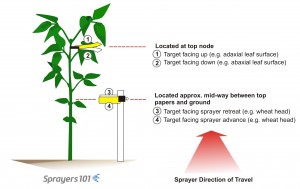 Location and orientation of water-sensitive papers relative to soybean and sprayer direction of travel.

Now that I had all this data under my belt, it was time for my down-and-dirty coverage trial. In 2013, working with Mike Cowbrough (OMAFRA) and Peter Smith (University of Guelph), we characterized coverage from 14 nozzles on vertical and horizontal targets located in mature soybean. 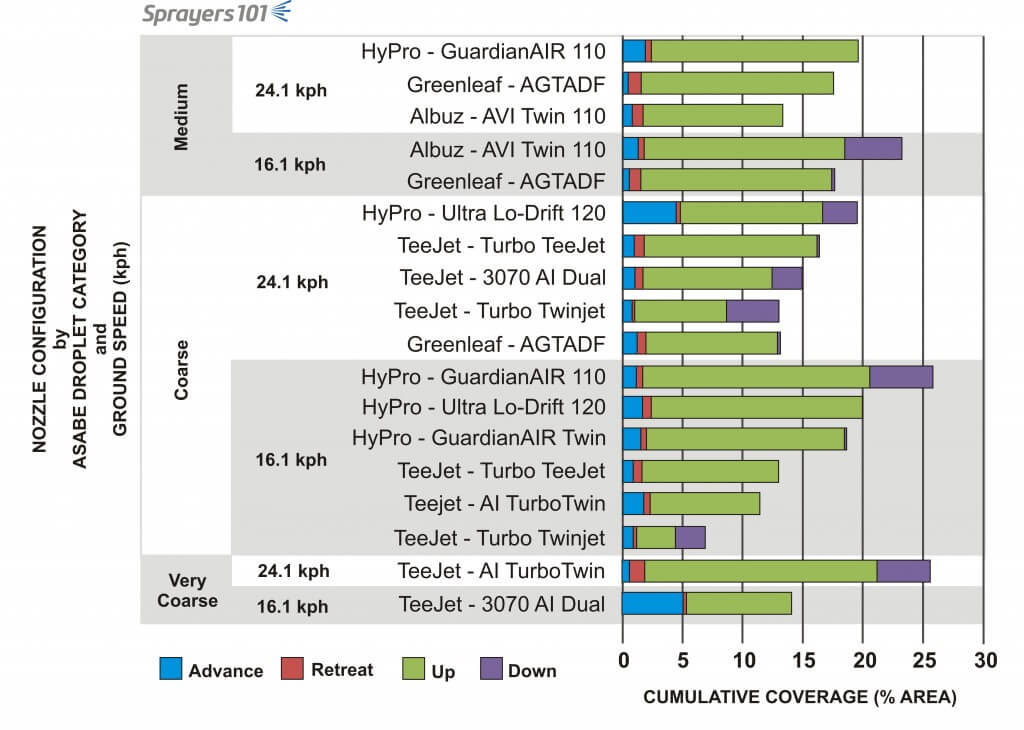 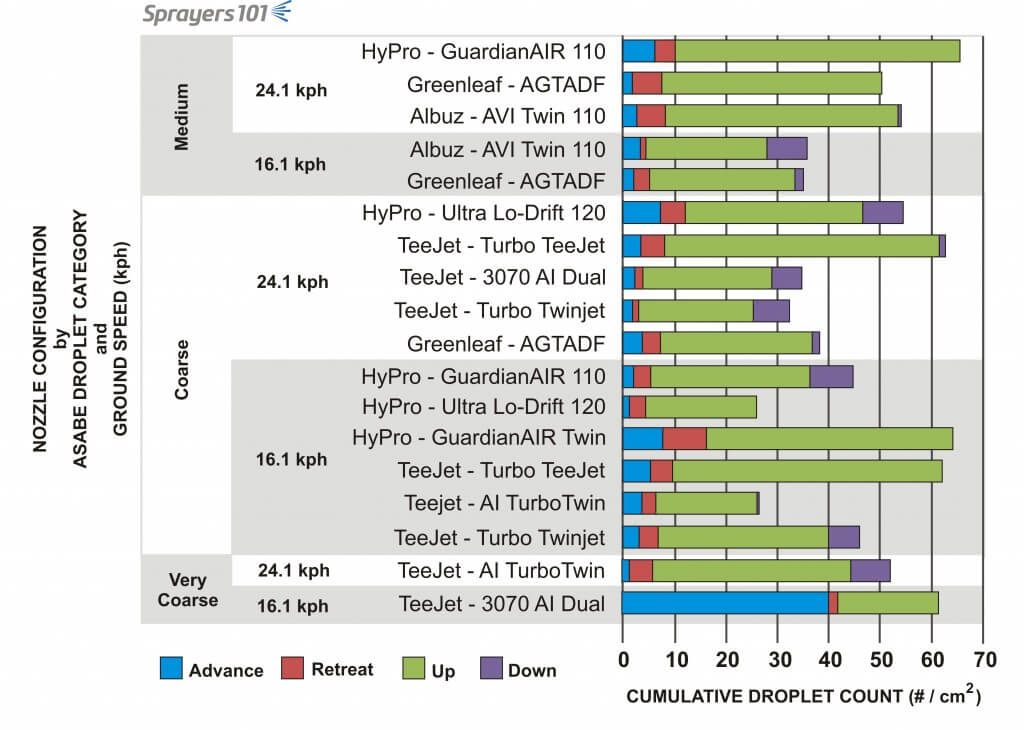 Interpreting the data set was challenging given the number of variables that changed from nozzle to nozzle (i.e. mean droplet size, spray angle, and ground speed). Further, by locating the vertical targets within a dense soybean canopy, spray penetration became a prerequisite for coverage, which would not necessarily be the case with a grass crop like wheat.

While I’m the first to admit there are confounds and a few questionable experimental design issues, there is value in the data. Primarily in the fact that there is no obvious correlation between nozzle design, the conditions in which the nozzle was used and the resultant coverage. This variability in coverage suggests that nozzle choice should not be the only consideration in the pursuit of an efficacious spray application… at least in the case of twin fans and a tight-canopy crop like soybean.

And so, with that in mind, the following sprayer settings should be considered:

The “perfect nozzle” will not help if the critical window for applying the protectant fungicide is missed. Timing, product choice, and a calibrated sprayer operating in complimentary weather conditions are arguably more important than the minor improvement in coverage a specialized tip may or may not provide.

Special thanks to Mike Cowbrough (OMAFRA) Peter Smith (University of Guelph) and summer students Charlotte Mackay, Stephen Boersma and Megan Leedham for their help running and analysing the trial.