Most pesticides are either pre-formulated with the required adjuvants, or the label specifies their addition. However, compelling claims by manufacturers create interest in tank mixing additional adjuvants to improve some aspect of pesticide performance. In a previous article we advised caution when using adjuvants in airblast sprayers (see here). Specifically, we stated that unless an adjuvant has been tested with airblast equipment, do not assume it will perform as it does in a boom sprayer. In the last year, we’ve received a lot of questions about anti-drift adjuvants, so we decided to test one of the more popular products. 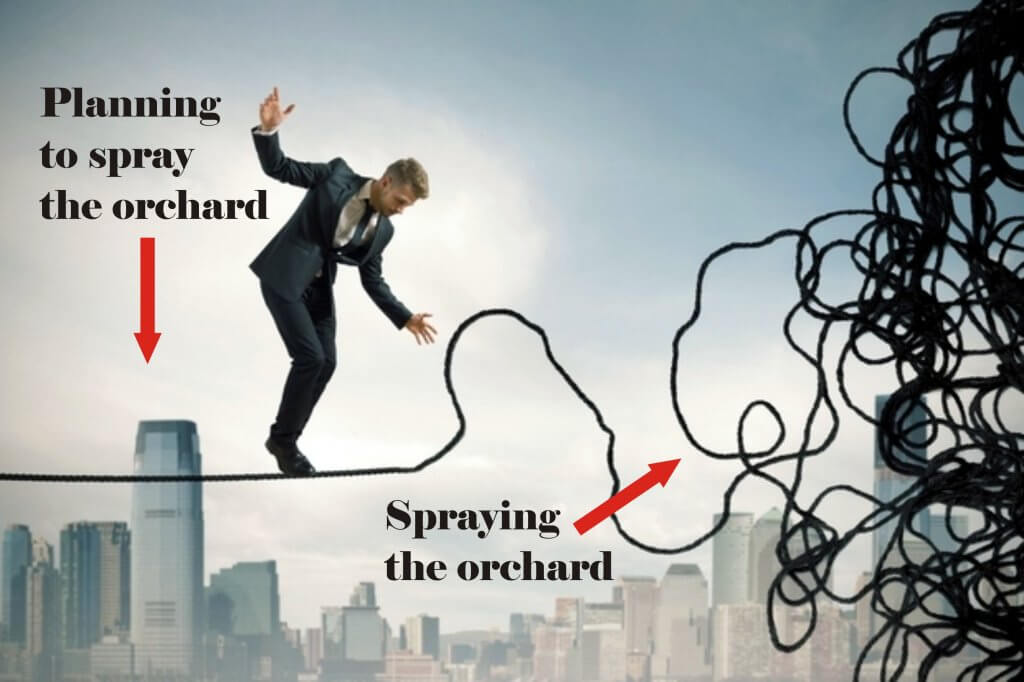 According to the manufacturer, InterLock is a vegetable oil-based adjuvant intended to improve deposition, canopy penetration and drift reduction from both aerial and ground applications. Independent research has validated its ability to reduce the population of Finer droplets produced by a nozzle without shifting the entire droplet spectrum into a Coarser category. As such, InterLock is used extensively in aerial and field sprayer applications, but we wanted to explore its fit in airblast applications.

There are fundamental differences in how an airblast sprayer functions compared to a field sprayer. An airblast sprayer operates at pressures considerably higher than field sprayers, and many use paddle agitation to churn tank mixes. Further, droplets are entrained by air and can be carried several meters before reaching their target. So, does the collective impact of paddle agitation, droplet shear and the increased opportunity for evaporation affect the adjuvants performance?

Water sensitive cards were distributed throughout target trees in an apple orchard. We elected to use two models of airblast sprayer to eliminate the chance of sprayer-specific results. Both models applied either water or water-and-adjuvant. So, the four treatments were:

Orchard and Targets
We worked in high-density Honeycrisp apples planted in 2008 on M.26 rootstock. Row spacing was 5 m (16’), average canopy width was 1.2 m (4’) and average height was 3.3 m (11’). Water sensitive cards were located at the top, middle and bottom of each target tree, close to trunk. In each location, the cards were placed back-to-back with sensitive sides facing the alleys.

We placed cards in two trees in the same row, and the sprayer passed down both sides to complete the application. We performed this twice per treatment. That’s four trees per treatment representing a total of 24 cards (comprised of eight per position). 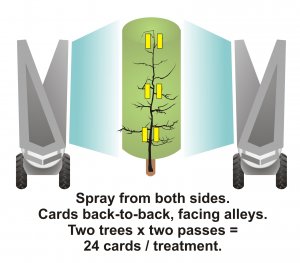 Sprayers
As previously mentioned, we used two models of airblast sprayer. In both designs, nozzle bodies are outside the airstream, causing additional shear as nozzles spray into the air on an angle.

Spray mix
Sprayers were filled with water for the control trials, and then dosed with the equivalent of 250 ml per 500 L (8.5 oz in 132 US gal.) of spray mix, per manufacturer’s recommendation. We ensured lines were primed and sprayer was up to speed before spraying.

Water sensitive cards were scanned and digitized to compare coverage and median droplet size using DepositScan software (created by Dr. Heping Zhu, USDA ARS, Ohio). Water sensitive cards have a limitation when quantifying average droplet size: once a card exceeds about 30% coverage, too many droplets overlap and their combined profile is wrongly counted as a single droplet. This can skew droplet size analysis.

For the sake of an accurate comparison, we selected subsets of the overall data; we analyzed only those cards with 40% coverage or less, then refined our comparison to those cards with 30% or less, and finally cards with 20% or less. In each subset, the data remained fairly robust because they included at least one card from each canopy position (i.e. top, middle, low) and three from each treatment.

In the following tables, the range of droplet sizes is represented by DV0.1, DV0.5 and DV0.9 in µm. Basically, this is the span of droplet diameters from the smallest 10%, to the median to largest 10% in microns. The standard error of the mean and the number of papers are also indicated.

In the first subset (i.e. 40% coverage or less) there was no trend to suggest the sprayer model made any difference in coverage. Nor did there appear to be any change in the droplet spectra produced by water or water-plus-adjuvant. In particular, there was no apparent increase in the DV0.1 when adjuvant was used, which we would expect to see if the Finest droplets produced by the nozzle were made Coarser. We hoped that by further subdividing the data to cards with 30% coverage or less, and then 20% coverage or less might resolve some trend, but there were no significant differences to speak of.

These trials are not drift studies, so we cannot say that the adjuvant has or doesn’t have an effect on particle drift. However, according to the water sensitive cards, there is no apparent impact on droplet size or deposition. This suggests that some property of airblast application has reduced or negated the benefit of using the adjuvant. As such, the use of InterLock in an airblast sprayer cannot be recommended. It supports our position that unless an adjuvant has been tested with airblast equipment, you should not assume it will perform as it does in a boom sprayer.

Thanks to Winfield for the educational donation of InterLock, to TeeJet for the nozzles and to Provide Agro for use of the Hol sprayer. Special thanks to Donald Murdoch of the University of Guelph for operating the sprayers.

Big news for our shop — we've signed on the dotted line for another three years of #RealAgRadio on SiriusXM Rural Radio Channel 147! http://ow.ly/o4nW50EiBaJ

The #OpenSpotSprayer is a low cost, opensource and simple approach to weed detection. It uses off the shelf items and simple colour-based code to pick out green weeds. Here it is mounted on the Digital Farm Hand robot @pbinarrabri.

So the cat’s out the bag! This is what @GeezaColeman, the @WeedControlLab and I have been building for the last couple of months.

Watch this space for detailed instructions, code and (hopefully) a paper.