Peer-reviewed journal publications claim there is a significant difference in spray coverage and deposition patterns when an agrichemical product is applied using an airblast sprayer versus a hydraulic hand boom. An airblast sprayer creates Fine droplets that shear in entraining air and are carried into a plant canopy. Properly calibrated, the air opens the canopy to expose all target surfaces to the spray. By comparison, a hand boom relies on pressure to propel fine droplets into a canopy, and while there is some air-entrainment surrounding the spray, it cannot travel as far or displace as much canopy. As a result, most of it impacts on the outer surfaces of the canopy.

Knowing this, it is surprising that so many products intended for use with airblast sprayers are applied by researchers and consultants using hand booms or the high-pressure arborist-style handgun (see ‘Survey of Submissions’).

Survey of Submissions
This graph represents a random selection of 150 minor use label expansion studies and registrant submissions from Canada and the USA spanning 1990 to 2011. It shows the application method by crop.

In 2012, we performed some research with the following goals: 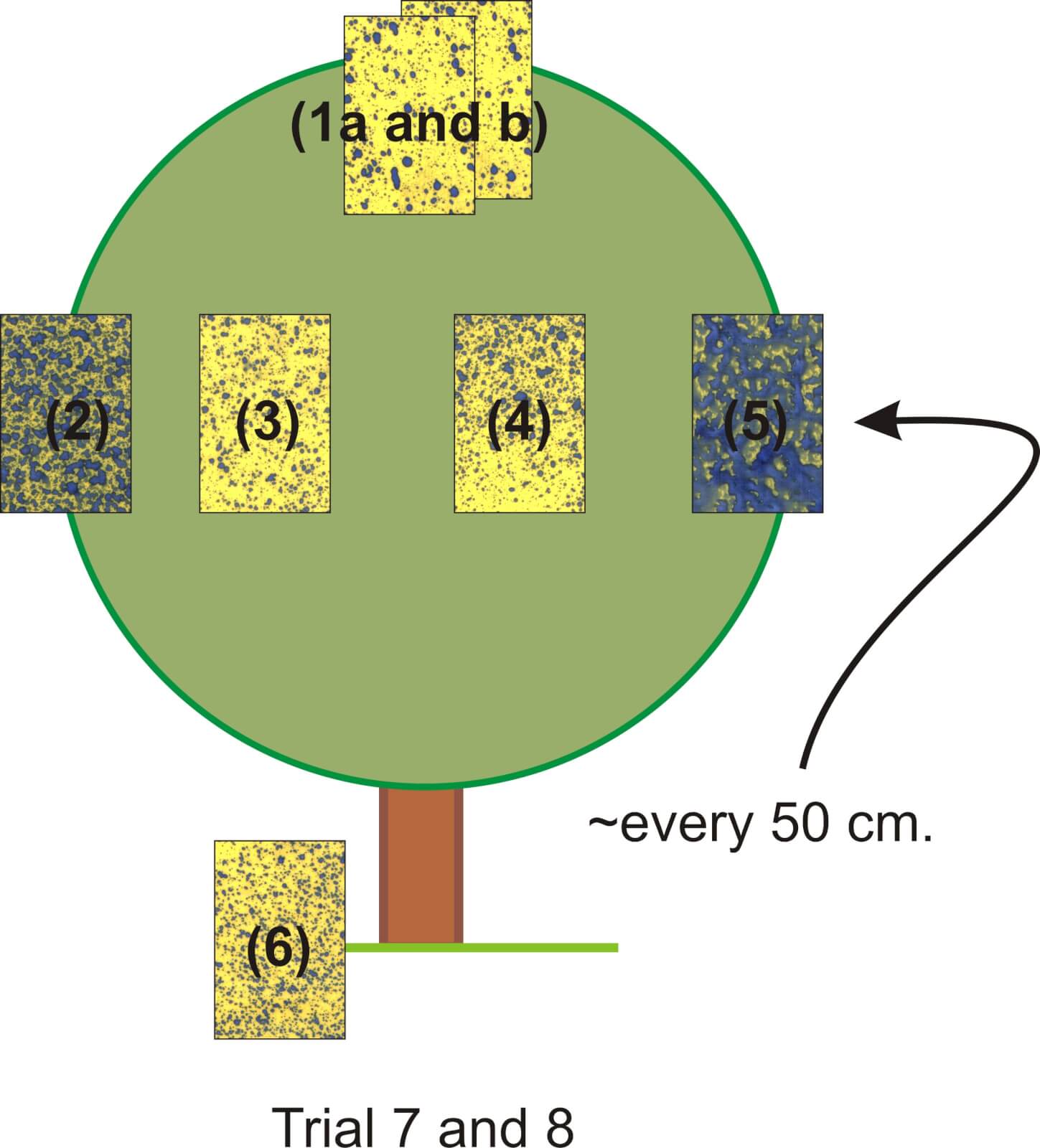 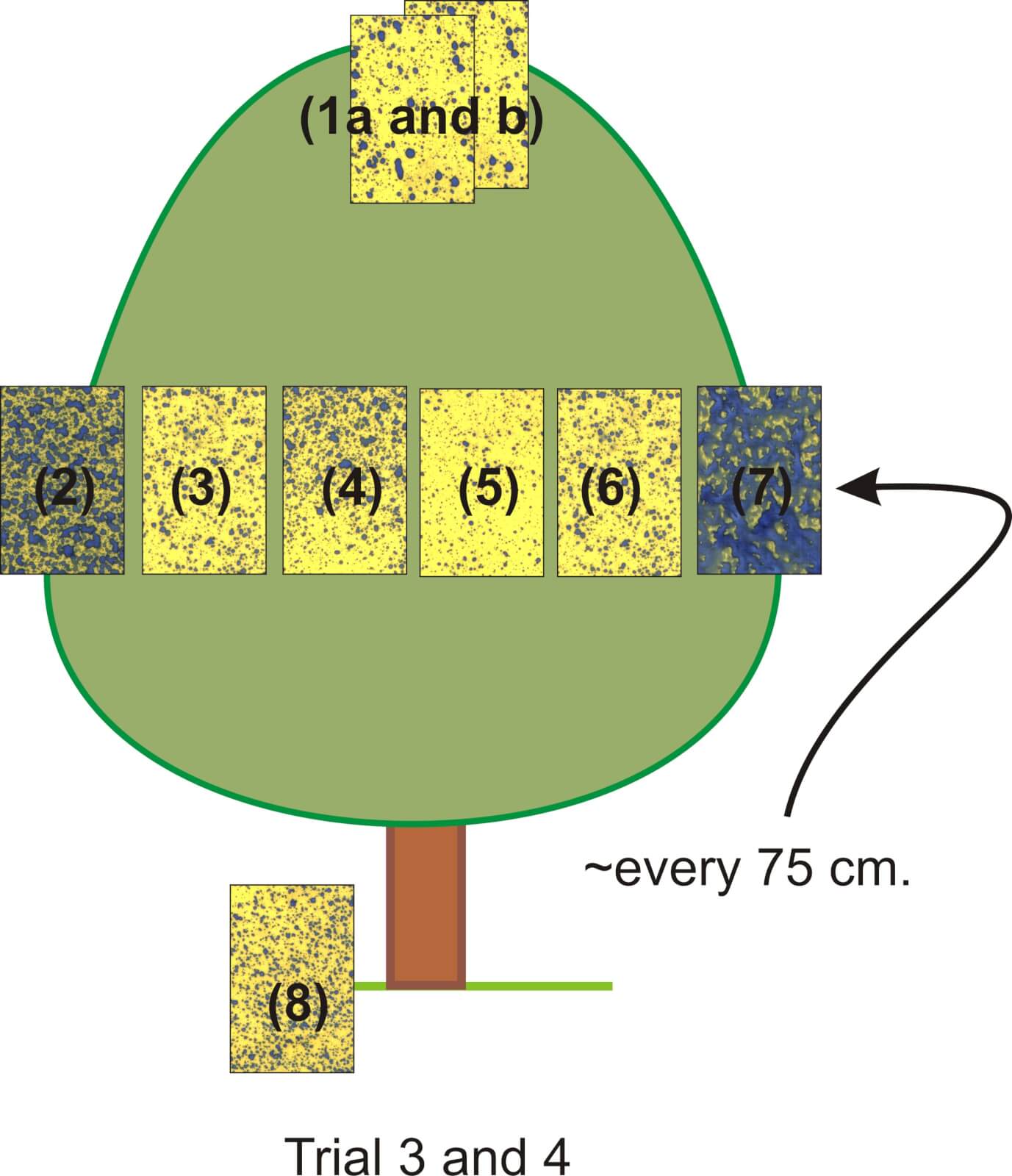 Sprayers were calibrated to emit the same volume per planted area via hollow-cone nozzles. Volumes selected were based on typical application volumes for Pristine or Captan (commonly sprayed in Canada). While there is no standardized protocol (and there should be) we followed typical practices of 500L/ha for grapes, blueberry and apples until plant growth warrants higher carrier volumes. At that point, many researchers go up to 1,000 L/ha. Coverage was quantified by collecting and digitally scanning water-sensitive papers to calculate overall percent coverage (see graph) and droplet density (average droplets per square centimeter – see graph). 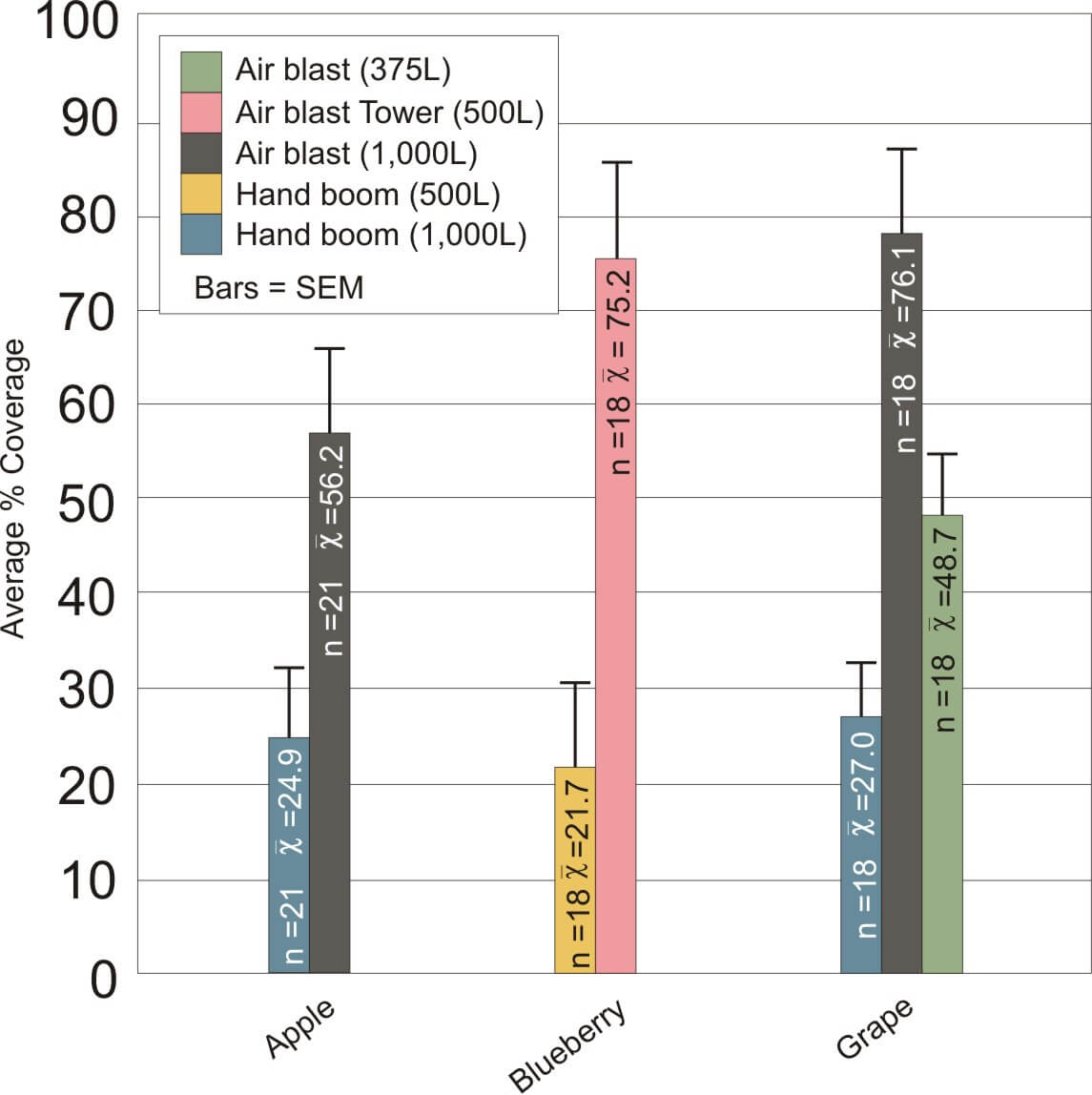 In all cases, airblast applications deposit > %50 more spray than a hand boom. In the case of grape, you’ll note there are three bars. This is because spraying 1,000 L/ha with the airblast sprayer drenched the targets (it was late in the season and the canopy was sparse), making it impossible to discern droplet density. When we reduced the output to  375 L/ha, we were able to register droplet density, which was still significantly higher than that produced by the hand boom at 1,000 L/ha. This raises significant questions about the validity of efficacy and residue studies performed with hand booms when growers apply the same products using airblast sprayers.

When this data was shared at extension conferences, it was sometimes noted that many researchers choose to spray the target until it is drenched, ensuring the dose administered to the crop reflects what was intended. This does not, however, invalidate the fact that a growers spray equipment and practices are significantly different, and the dose and spray distribution they achieve will not reflect the original research.

The recommendation is that researchers use the same equipment to test products as the growers use to apply them. But, recognizing the difficulties associated with performing small plot experiments with full-sized airblast sprayers, an alternative is needed. That topic will be addressed in part two of this article.

Hello folks! If you would like to learn about the Orchard Tools app for iOS, join me for a demo on March 26th at 1 PM EST (2 PM AST). Lots of options to record data and especially helpful for fruit growth rate. Video shows how "handy" it is. Register now: https://www.perennia.ca/eventer/tools-in-the-toolbox-for-apple-crop-load-management/

Precision ag in apple orchards. More evidence that putting the correct dose in the right place is as, or more, important than a per-area-planted rate.

Note to self: ice has little traction.

Illusion caused by a temperature inversion.