Tom Wolf is based in Saskatoon, SK and has 30 years research experience in the spraying business. He obtained his BSA (1987) and M.Sc. (1991) in Plant Science at the University of Manitoba, and his Ph.D. (1996) in Agronomy from the Ohio State University. Tom focuses on practical advice that is research-based to improve the efficiency of producers. He also rides a unicycle to the office every day.

There’s been a lot of talk about rate control in spraying, and one key technology is pulse-width modulated spray systems (PWM). Although PWM has been commercially available for a number of years, we are seeing new products enter the market. This article explains what PWM is and how to make it work in a spray operation.

Modern sprayers, be they self-propelled, or tractor- or truck-drawn, experience fluctuations in travel speed. Operators speed up or slow down as conditions demand. In order to maintain a constant application volume per acre, the spray liquid flow must change in direct proportion to travel speed. The sprayer achieves this with a rate controller, a device standard on most sprayers.

Using a simple mathematical formula, the rate controller calculates what the required liquid flow needs to be for any given travel speed. A typical controller changes the flow by adjusting the pump pressure. The sprayer operator keeps an eye on the spray pressure to ensure it doesn’t exceed the capabilities of either the nozzle, the plumbing, or the pump or that it does not produce an undesirable droplet size or spray pattern.

There are currently about five options for rate control on the market, and all but one rely to a degree on spray pressure to manage flow rate.

There are two chief features of a pressure-based approach that affect the spray operation.

In comparison, PWM systems do not rely on pressure changes to effect new flow rates. Instead, the duty cycle of the system affects nozzle throughput. Boom spray pressure stays constant throughout the duty cycle range, and as a result, so does spray quality and spray fan pattern angle. In practice, the lowest duty cycles increase droplet size, and reduce fan angle, somewhat. These effects are minor and do not impact overall performance. The operator also has the option of adjusting the spray pressure to get a desired droplet size, even “on the fly” and the PWM system will maintain the desired application rate.

A PWM system can therefore change travel speeds by about a factor of five (from 20 to 100% DC). Duty cycles less than 20%, although possible, are not recommended.

Note that the actual measured change in flow rate achieved by a PWM system is not directly related to duty cycle. The actual nozzle flow rate is greater than that predicted by a duty cycle calculation, especially for smaller nozzles. 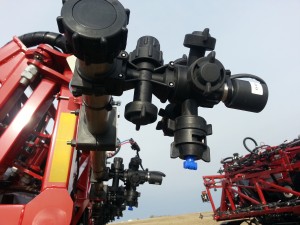 The original inventor of PWM for spraying, Dr. Ken Giles of the University of California at Davis, worked with Capstan Ag Systems to produce the Capstan Synchro, the first PWM system on the market. The Capstan product was later licensed to Case IH sprayers and named AIM Command. It was a factory option on Case sprayers from 1998 to 2016, manufactured by Capstan. The system featured a separate monitor, permitted PWM to range from 100 down to 15%, and featured an alternating pulse in which the every second nozzle pulses identically, and alternating nozzles work in a 180 degree offset. In other words, in a system operating at 50% DC, when any given nozzle is on, adjacent nozzles are off. This results in a “blended pulse” that minimizes the likelihood of skips. 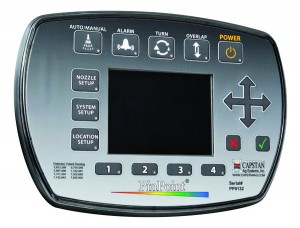 In recent years, Capstan has entered the retrofit market place and the technology has been installed on many brands of sprayers at the dealer level. The hardware is identical to Case products, with some minor differences in how the software interacts with the rate controller.

In 2014, Raven introduced a system called the Hawkeye. Initially targeted at the retrofit market, the system uses an ISOBUS approach that works with the Viper 4 monitor. The electric solenoids are similar to those on the Capstan systems. The basic system (Hawkeye) features turn-compensation, but not individual nozzle sectional control. Section resolution is determined by the limits of the monitor, for example, 16 sections on the Raven Viper 4. Hawkeye 2.0 HD, announced December, 2015, allows for individual nozzle on-off control. Hawkeye will be available as a factory option on New Holland, Apache, and Case sprayers starting in 2017. 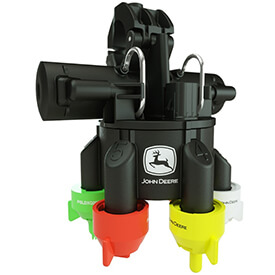 John Deere announced their PWM version on August 29, 2016.  Called ExactApply, the system  splits the liquid flow into two streams, one through each of two solenoids. The solenoids serve to shut off the flow, and also to control liquid flow rate, each running at 15 Hz.  The body contains six nozzles on numbered feed housings, and they operate in opposite pairs.

The body is rotated manually to the preferred nozzle pair. With the longer housing in front (#4, 5, and 6) it allows for very high flows from a single nozzle only. When the shorter housing is rotated to the front, the unit will allow just the front, just the back, or both nozzle to operate.

It has three main modes.

The system also features individual nozzle shutoff, turn compensation, programmable rates by nozzle, nozzle plug detection, and LED lighting. It is expected to be competitively priced compared to the other systems, and offers higher maximum flow rates through its solenoid (up to 50 US gpa at 15 mph).

Units were tested on sprayers in 2017, and became available as a factory option or a retrofit in 2018. We’ve provided an in-depth overview of ExactApply here.

TeeJet has a system called the DynaJet Flex 7120 that uses either a monitor or Android tablet to display pressure, duty cycle, and droplet size. DynaJet is available to OEMs and to the aftermarket. The unique aspect of the TeeJet system is the ability to dynamically select different droplet sizes, and the system will maintain that droplet size across a wide range of speeds or application rates. The TeeJet system is compatible with any flow-based rate control system, and does not require a TeeJet spray control. The product is available from TeeJet dealers.

Spray Quality: Since PWM systems can alter flow rate without affecting spray pressure, the user can select a spray pressure that meets their spray quality goals and expect this spray quality to remain constant throughout the field, regardless of travel speed.

Rate Control: A PWM system can be used for variable rate application. The spray volume, as determined by duty cycle, can vary as desired within its operational envelope without a change in travel speed.

Turn Compensation: AIM Command Pro, Capstan Pinpoint, Raven Hawkeye, and John Deere ExactApply feature turn compensation capabilities. During a turn, the outside boom moves faster than the inside boom, resulting in under- and over-application. A turn-compensated system can deliver additional flow to the outside, reducing the flow towards the boom end on the inside of the turn. In practice, there are limits to this feature. For example, the system’s average DC needs to be about 60 to 70% to offer the maximum flexibility. Second, the diameter of the object being turned around should not be much smaller than the width of the boom, or else the inside boom moves too slowly in relation to the outside boom. The system’s lag must also be minimal to avoid a counteracting effect during turn initiation and completion.

Sectional Control: In a PWM system, sectional configuration is determined by wiring and software, not plumbing. All section valves remain open during operation, and sectional shutoff is effected directly at the nozzle solenoid. Individual nozzle sectional control is offered by the AIM Command Pro and Capstan Pinpoint, as well as Hawkeye 2.0 HD and John Deere ExactApply. This feature may provide product savings when field margins are not straight, or fields feature obstacles resulting in significant overlaps.

Shutoff response: The traditional nozzle check valve is designed to prevent nozzle dripping on boom shutoff. However, due to the presence of air pockets in most booms as well as the elastic nature of rubber hoses leading to the boom, the shutoff is delayed until the boom pressure reaches about 1 bar. This can take up to 10 seconds, resulting in unintended overspray and other safety concerns. In a PWM system, the solenoid shuts off the flow to the nozzle instantly, and conversely, turn it on instantly as well. The boom remains fully pressurized while the nozzles are shut off, allowing the spray patterns to be fully developed upon flow resumption.

A pulsing solenoid creates short durations of low pressure inside the nozzle body, and this can result in poor performance of some air-induced tips. As a result, the PWM manufacturers have recommended that air-induced nozzles be avoided, and pre-orifice nozzles be used instead.

Case sprayers are equipped with a nozzle body manufactured by Wilger Industries that fits the ComboJet nozzle caps. This company offers four nozzles for PWM. In order, from finest to coarsest:

Wilger’s nozzle body can be purchased as retro fits for other sprayers. The company also offers adaptors that allow Wilger nozzles to be used on TeeJet-style bodies and vice versa.

PWM systems operating on TeeJet style bodies are well served by TeeJet Technologies’ Turbo TeeJet nozzles. These wide-angled tips are available in sizes up to 11008 and generate suitable spray qualities at pressures ranging from 15 to 60 psi. Many operators use the Turbo TwinJet, another good option, which is available in a large selection of flow rates to 11010.

Hypro has a pre-orifice tip similar to the Turbo TeeJet, called the Hypro Guardian. Most other manufacturers, including Lechler, Hardi, Arag, and others, have traditional pre-orifice flat fan nozzles that may also work. It is important to always select 110 degree fans to ensure that 100% overlap is achieved to maintain the concept of blended pulse. Limitations are in the maximum flow rates available in a specific model, many nozzles are not available in sizes larger than 05 or 06.

The sizing of nozzles requires a small amount of calculations from traditional spray calibration tables. Follow these steps:

One of the more useful websites for PWM users is the Tip Wizard by Wilger (www.wilger.net). It is geared towards selecting the right nozzle for Case AIM Command, which uses the proprietary Wilger nozzle bodies and caps. The website helps users to select nozzles that match their volume, speed, and droplet size requirements.

Once a user understands the basic principles of the system, any conventional calibration chart can be used to identify the needed size nozzle. A user simply needs to choose a nozzle that is about 30 to 40% larger in flow rate, to allow the system to run at approximately 70% DC on average.

Wilger also produces a smartphone app, Tip Wizard, that offers much of the same features as their website for selecting tips.

Capstan (www.capstanag.com) produces a useful calibration table that identifies the pressure drop for various nozzles and pressures, as well as travel speed ranges for these nozzles when applying a range of water volumes.

Raven Industries offers information on the Hawkeye on their website (ravenprecision.com). The company offers useful videos on their youtube channel that illustrate installation procedures.

The main hazard for the PWM solenoids is contaminants. Granules can become lodged on the poppet seal surface, reducing the metering accuracy. Regular inspection of screens, and occasional removal and disassembly of the solenoids to expose the poppet is recommended.