When a nozzle catalogue states that a nozzle produces an 80˚ or 110˚ fan throughout a given pressure range, the reader (rightfully) assumes it to be true. Unfortunately, this is not always the case.

To illustrate this, I assembled a collection of red, flat fan nozzles (‘04s). They represented a variety of spray qualities and came from different manufacturers. I plugged each nozzle into a spray pattern table, set the regulator at a given pressure, and photographed the spray angle and spray distribution. I repeated this process for each nozzle at seven different pressures within the manufacturers approved range of 20-80 psi. After uploading the pictures on a computer, I measured the spray angle using a digital protractor.

I hypothesized that there would be a small increase in spray angle as the pressure increased; it seemed like common sense. Anyone who has operated a sprayer has seen the spray pattern open up as the boom fills and pressurizes. However, what I did not expect was the huge variability and inconsistency in spray angle over the manufacturer-recommended pressure range. 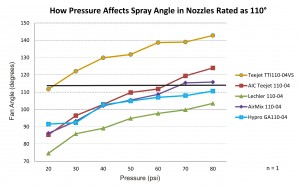 While I tested several nozzles other than 110˚ fans, let’s focus on 110˚s due to their popularity. The spray angle for 110˚ nozzles ranged from a severely collapsed 75˚ at 20 psi, to a very overextended 143˚ at 80 psi. There was one nozzle that failed to reach 110˚ at any pressure. Conversely, there was another that was over 110˚ at nearly all pressures.

Ideally, spray nozzles should be operated around the middle of its manufacturer-recommended operating range, so one would expect the angle to be bang-on at that pressure. Three of the 110˚ nozzles I tested came close to meeting that expectation. Of those three, the TeeJet AIC110-04 was the only one to achieve 110˚ at the middle of its recommended range (~50 psi).

As you can see in the figure below, the spray angle for the AIC110 was only 85˚ at 20 psi. The yellow floats show that the distribution was fairly even, if a little narrow. At 50 psi the nozzle produced the expected 110˚ fan, and the spray distribution was also what one would expect: 25% of the spray tapers away on each end, and 50% is relatively even. This is why we strive for at least 50% overlap with 110˚ fans, but more on that later. At 80 psi, the angle spread out to 125˚. This may not be as critical as a collapsed pattern, but could become an issue for even spray distribution. 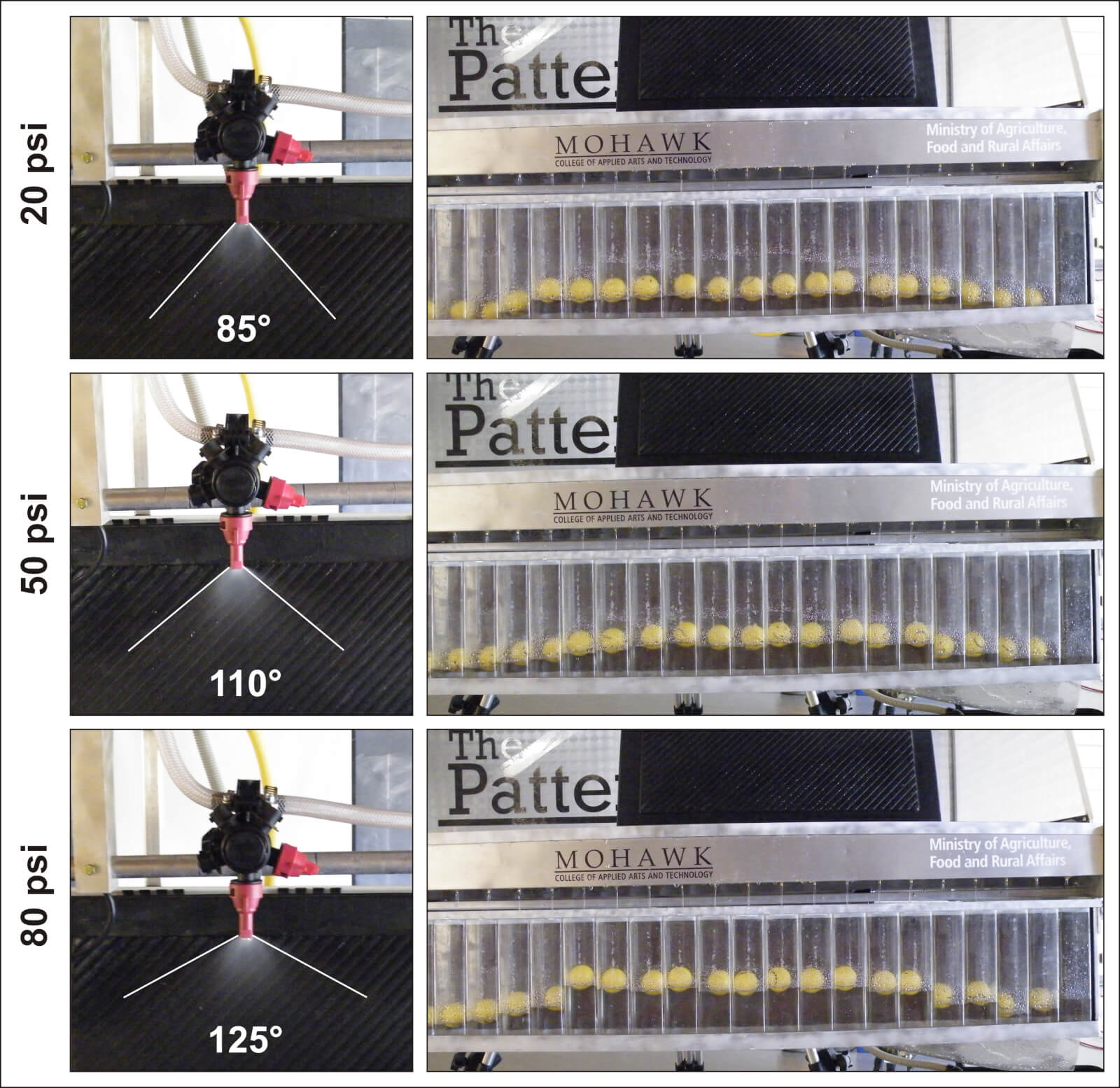 Photographs of spray angle and distribution for the TeeJet AIC110-04 at the extreme low, middle and highest pressures of its recommended pressure range. 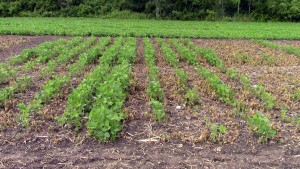 Soybean demo plot sprayed with a contact herbicide using 110 degree air induction flat fans at 20 psi. The collapsed spray pattern did not overlap sufficiently to burn the entire crop down, leaving a striped pattern and demonstrating the poor coverage.

This has some big implications. Nozzle spacing on a boom varies from sprayer to sprayer. Generally 50 cm (20 inch) centres are the goal, but certainly we’ve seen both more and less. Nozzle spacing and boom height collectively determine the amount of spray overlap. Excessive overlap isn’t such a big problem, but gaps in the pattern could lead to misses, such as in this soybean demo plot, where we sprayed a contact herbicide with a collapsed pattern. You can see the striped pattern of hits and misses that result from an incomplete overlap of spray.

Nozzle manufacturers generally recommend a 30-50% spray overlap for 110˚ air induction flat fans. However, experiments performed by @Nozzle_Guy (aka Dr. Tom Wolf of Agrimetrix Research & Training, Saskatchewan) have shown that the largest droplets produced by these nozzles occur at the “horns” or edges of the pattern. So, while the volume of spray is consistent at 50% overlap, the droplet density is not. Bigger droplets mean fewer droplets, and fewer droplets increase the chance of missing the target. Tom advises 100% overlap, which translates to the edge of a spray pattern meeting the middle of the next.

And so, if nozzle angle is inconsistent over a range of pressures, then consistent coverage becomes a moving target. Sprayer operators should take the time to observe the spray pattern at the boom over their typical range of pressures to determine if the pattern is compromised. To summarize:

For more information, check out these related articles on pressure drop and pressure gauge accuracy.