We recently worked with a new grower who bought a mature, highbush blueberry operation. The seller (a 30-year veteran) advised spraying as much and as often as possible. The nouveau farmer did so, albeit with reservations about wielding chemistry like a sledgehammer rather than as a surgical part of integrated pest management. The result? Spotted-wing drosophila (SWD) still had significant impacts on the crop and no one was comfortable with the aggressive pesticide use in a U-Pick operation.

In 2016 they performed an aggressive pruning (see image below). This is know to have many benefits: 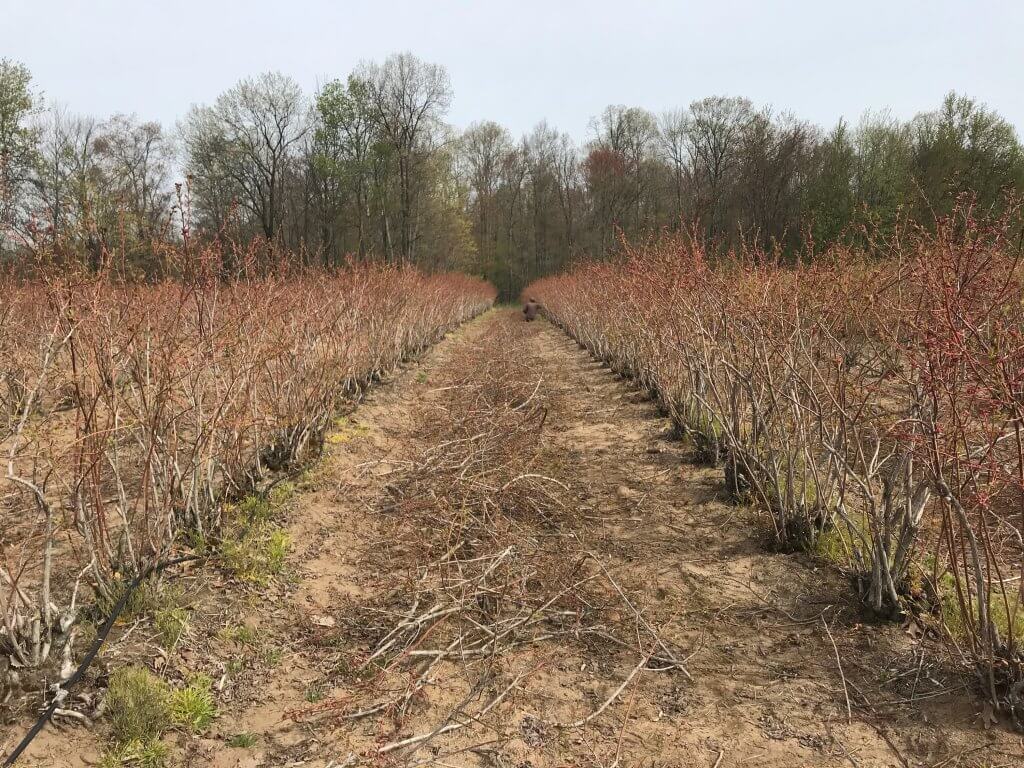 If you can see light through a post petal-fall canopy at high noon, you have done a good job of pruning. 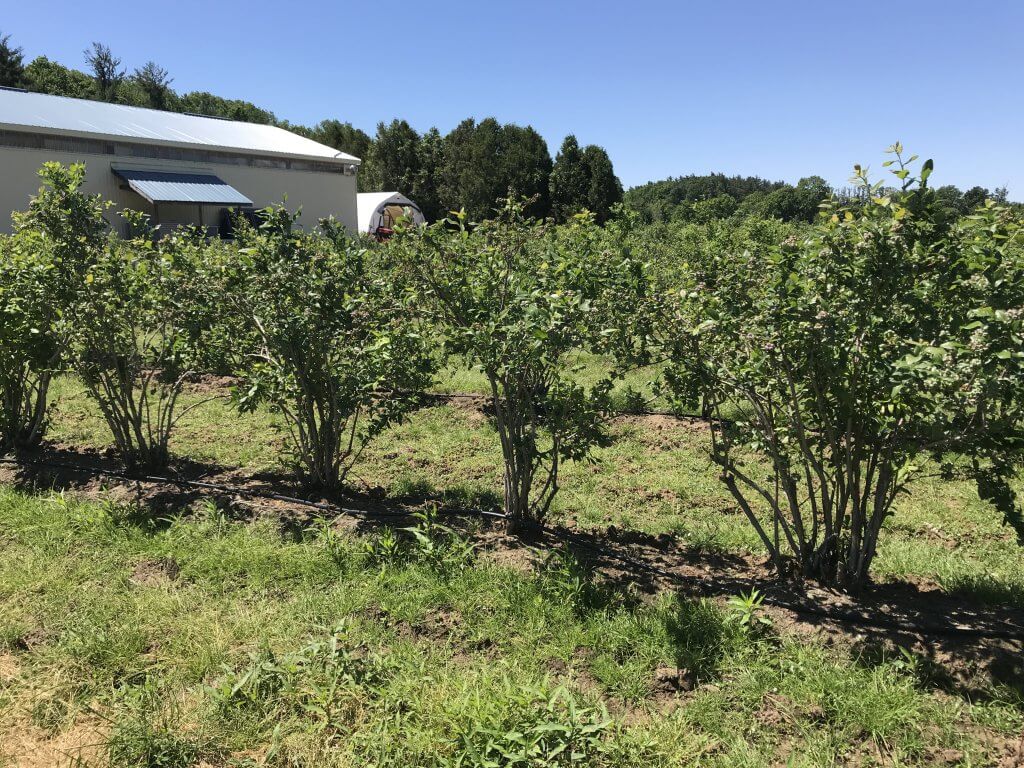 There are concerns with such a dramatic pruning. There’s less potential for production per acre, and trellising the bushes may become necessary as berries weigh the smaller bush down. In 2017 they found that the quality of the remaining berries was greatly improved, and this meant fewer hours culling berries during packing. Financially, the grower felt he came out ahead. But pest control was still an issue.

In 2018 they changed the spray program. The exiting farmer left his Kinkelder air shear sprayer (see below). Designed to reach the top of standard fruit trees, the >100 mph air and Extremely Fine spray quality it produced was excessive for highbush blueberry.

The grower considered a cannon-style sprayer hoping to spray multiple rows in a single pass, but given his desire for improved coverage and reduced waste, he elected to drive every row using an axial sprayer. It then remained for us to use the Crop-Adapted Spraying process to calibrate the air volume, air direction and travel speed before settling on a nozzling solution. This process is covered in detail  here and in the Airblast101 book.

In April, May and June of 2018 we used water-sensitive paper confirm coverage. We also performed weekly scouting. By matching the sprayer calibration to a well-managed canopy, the grower went from ~1,000 L/ha to ~400 L/ha, representing considerable savings in water and pesticide. Chemistry was rotated and applications were made according to IPM in early morning (as long as there were no pollinators) to avoid potential drift due to thermal inversions. The following image shows what those papers looked like in June. 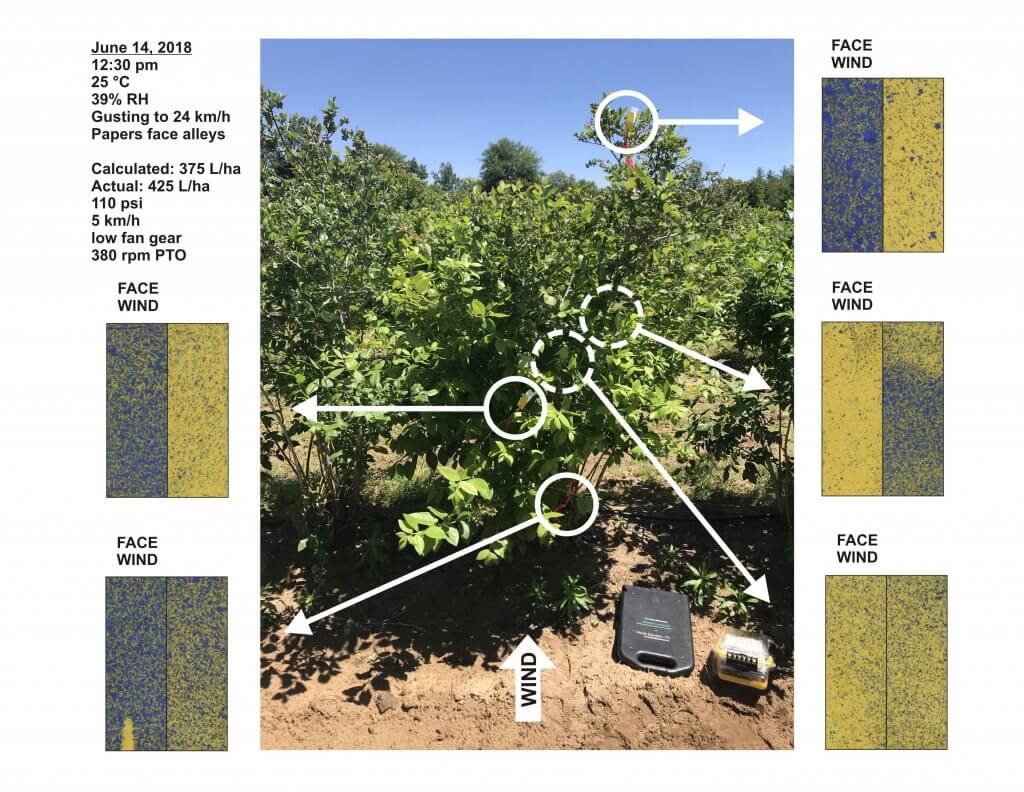 Note how little spray escapes the target rows in the following video. Bear in mind the wind was very high, but given that this was just water we saw it as an opportunity to test in a worst-case scenario (please don’t spray in such high winds). We used air-induction hollow cones in the top nozzle position so droplets were large enough to fall back to ground when they vectored over the top of the canopy, or between the bushes. Further, we used gear-up, throttle down to moderate the air.

The grower was very happy with the reduction in noise and the greatly improved accuracy of the spray applications. By early July, the berries looked great (see image below) and spray coverage continued to meet threshold without excess. Note in the following image from a July 1st application that spray coverage is can be variable; Occasionally there are drenches and misses. This is why it is important to assess coverage in multiple locations an not rely on a single target canopy.

We have published the results of applying Crop-Adapted Spraying to highbush blueberry here in Part 2.