In June, 2014, 30 growers attended a spray coverage demonstration in a potato field in Alliston, Ontario. Our goal was to explore three questions:

This certainly wasn’t a scientific experiment. Spray demos are a great foil for discussing droplet behaviour and teaching operators how to diagnose spray coverage. Take the “results” with a grain of salt. 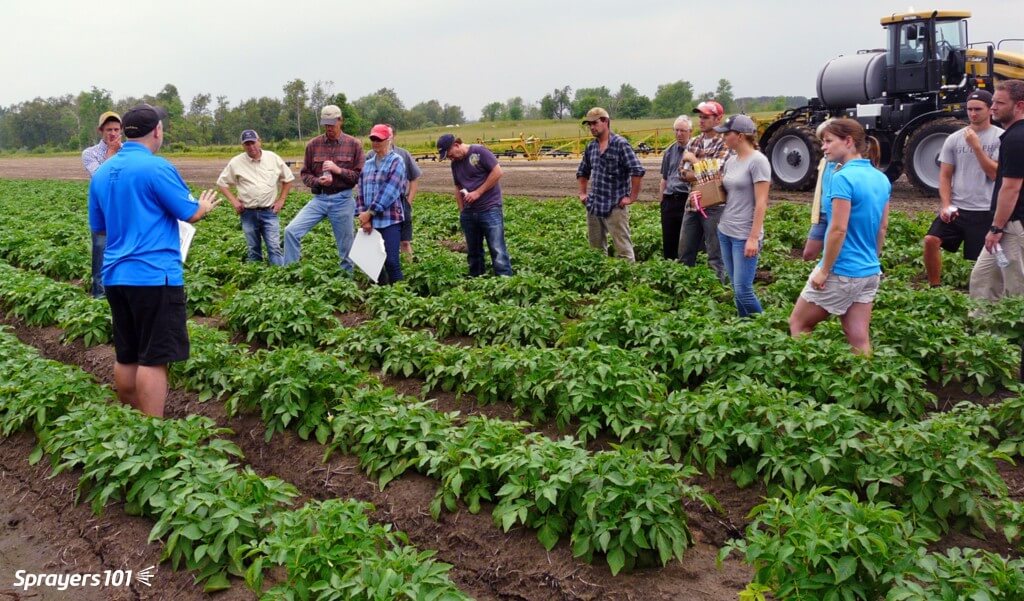 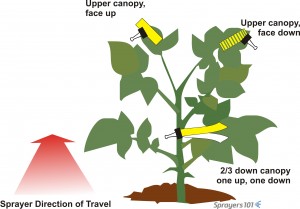 The location of water-sensitive papers in the potato plant canopy. Two plants were papered for each nozzle.

In order to see spray coverage, we placed water sensitive paper in the potato canopy. Water sensitive paper turns from yellow to blue when it is contacted by spray (in this case, water). Normally, we use a digital scanner to quantify spray coverage. However, it was a very humid day, and this made it difficult for the scanner to discern spray from background. We decided to assign a qualitative value to the cards based on coverage. Low (or no) coverage got a score of zero. Moderate coverage (enough to offer good control) received a score of one. Cards with excessive coverage (anything more than moderate) received a score of two. Did I mention this wasn’t a scientific experiment?

To answer the first question, we compared coverage from two hollow cone nozzles. The TeeJet TXR80028, which creates a fine/medium droplet size, and the TeeJet AITX8002VK, which is air-induced and creates a coarse/very coarse droplet size. In both cases the boom was approximately 50 cm (20 in) above the top of the crop, travelling at 10 km/h (6.2 mph) and spraying about 110 L/ha (~11.5 gpa).

Generally, coarse droplets tend to move in a straight line, and are not easily deflected by moderate wind or travel speed. Conversely, fine droplets slow very quickly and move erratically depending on the forces acting on them.

Graph 1 shows the coverage results in each position. We see that finer droplets appear to penetrate the canopy more than the coarser droplets. We also see that under-leaf coverage was difficult to achieve overall. It’s possible the small amount of coverage achieved on the under-side of the top scaffold of leaves is the result of coarse droplets bouncing… but if that’s the case, why wasn’t there any coverage on the upward-facing leaves inside the canopy? Write me – I’m open to ideas. In any case, redistribution is erratic and should not be relied on.

This graph may appear to favour small droplets, but be aware that fine droplets are prone to drift and should not be used without making every effort to prevent off-target movement. Shrouds, low ambient wind, and slower ground speed can help, but only a little. The best drift-mitigating option that still allows the use of finer droplets is an air-assist option on the boom, which would also improve under-leaf coverage. I’ve seen it in field tomato. It’s disappointing that there aren’t more self-propelled sprayers in Ontario that offer this feature (I have seen Hardi and Agtec).

Generally, raising the volume-per-hectare translates to improves coverage, but at some point there is a diminishing return. Imagine comparing coverage between 1 L/ha and 100 L/ha – there would be a big difference. Now imagine comparing 500 L/ha to 1,000 L/ha – probably not much difference, because drenched is drenched.

According to Graph 2, the higher volume did not improve coverage. In fact, the lower volume appears to have superior coverage, but it’s likely not significant. Remember, there are no error bars here because there’s no statistical analysis – it’s not a scientific study. It’s possible that at this stage of growth, our 150 L/ha was close to the threshold of diminishing return.

Once again, note the absence of under-leaf coverage. Truly, the more I spray vegetable and row crops with conventional nozzles on a horizontal boom, the more I think under-leaf coverage can only be achieved by Bigfoot riding the Loch Ness Monster. Without directed sprays from drops (aka pendant nozzle arms) or some mechanical means of redistribution (e.g. air assist, air deflectors or even electrostatics) droplets will not reliably change direction.

To answer this question, we used HyPro’s Guardian Air nozzle (GA11003), which is a 110° wedge-shaped flat fan that we alternated between 15° forward and 15° backward on the boom. We compared it to Greenleaf’s TADF nozzle (a blue and yellow 02), which is an asymmetrical, 110° twin-fan tip, where one fan is at 50° and has a higher flow compared to the second fan at 10°. We also alternated these nozzles on the boom to take advantage of what became four different angles of attack. Both tips sprayed 100 L/ha (10.9 g/ac) from a boom travelling 10 km/h (6.2 mph) and about 35 cm (~14 in) from the top of the canopy.

Graph 3 shows a lot of spray impacting on the surface of the canopy, with moderate penetration to the upward-facing leaves in the inner canopy. The angled spray may have helped a little, but no more than the finer droplets from hollow cones. Personal experience in soybean, field tomato and ginseng has shown that the spray angle does not have much bearing on crop penetration in a broadleaf canopy. This isn’t a surprise, because the tips were originally intended for vertical targets, such as wheat heads. Graph 3 seems to bear this out.

Now, since I ran this last demo, I’ve learned that I really didn’t use the twin fan nozzles optimally. In order to keep the outputs comparable, the rate controller operated the TADF’s at about 30 psi. That pressure is fine for something like glyphosate, but for contact products 60 psi to 120 psi is preferable to put the droplets in the medium range and keep them moving at the right angle.

A lot of people like the asymmetrical nozzles in broad leaf crops, so if they’re working for you that’s great. Carry on! As for me, I’m hoping to run a more stringent experiment in the future to satisfy myself.

So, as I’ve pointed out a few times, remember that this comparison of nozzles and spray variables isn’t definitive. It was only a subjective demonstration. Further, coverage doesn’t necessarily imply efficacy: Just because you have more coverage doesn’t mean you didn’t already have enough to do the job.

Caveats aside, however, there are a few points to be made: