In June 2013 we ran a ginseng spraying workshop and we learned a lot. Ginseng is notoriously difficult to spray: it is highly susceptible to pathogens given the high humidity and still conditions generally found under the shade structure. Further, it forms a solid ceiling of leaves that resist spray penetrating to the stem and crown below, and makes under-leaf coverage very difficult to achieve. 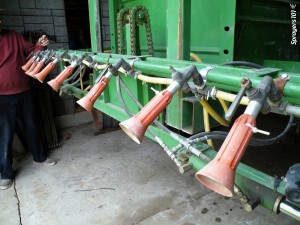 Many growers have (wisely) walked away from the old Casotti sprayers, which have been shown to give erratic coverage at best, and they have adopted the Arag Microjet system with it’s characteristic orange shields. The ~$80.00 price tag for each nozzle is because of the brass mixing valve and swivel joint, as well as the fact that it is imported from Italy. Contrary to popular belief, it does not use air-assist, or air-induction – it is strictly hydraulic, with the possible exception of creating a ‘wake’ at high pressures which can create a little air movement. This phenomenon is called air inclusion, and it can be emulated by any droplet that is large enough and is travelling fast enough. 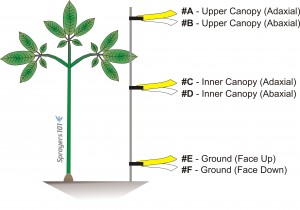 Location of water-sensitive papers in the ginseng canopy.

This nozzle is essentially the business-end of a spray gun, and the way it is used in ginseng it works more-or-less like a hollow cone disc-core assembly. This raises the question of why not use the cheaper and more readily available ceramic disc-core? We set out to compare the two nozzles using water sensitive paper set within the canopy. These yellow, paper targets turn blue when sprayed, clearly showing spray coverage.

The first step was to determine the output rate for each nozzle. Generally, nozzle manufacturers provide rate tables showing how much volume a nozzle emits (e.g. US gallons per minute) at a given pressure. Finding these tables for the 1.5 millimetre Arag Microjet proved difficult, and when one was finally obtained, it was discovered the rates were established for 200 to 850 pounds per square inch. This is excessively high pressure for a typical boom sprayer, so tables had to be developed for lower pressures.

Classic Arag microjets have a mixing valve that opens the spray up into a hollow cone (valve handle left or right), or collapses it into a tight stream (valve handle middle). The valve position also changes the rate. It can never be shut off completely, and it’s hard to adjust consistently. 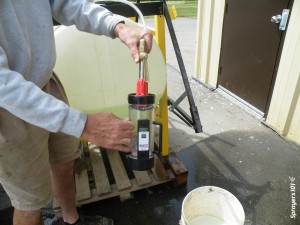 Further, given the odd design of the mixing valve, it was determined that moving the handle 10 degrees left of centre, or 10 degrees right of centre, gave a difference of as much as 60%. The table below  shows the outputs for a 1.5 millimetre nozzle with the handle in both positions and teh two graphs show the results, well, graphically. Outputs were determined using the Innoquest Spot-On SC-4, but the frothing effect created by the nozzles may have created minor errors. Each rate is the average of a minimum of three samples.

Average 1.5 mm ARAG Microjet output at a range of pressures and two valve settings in US Imperial units.

Using the grower’s typical ground speed of 5 km/hr (~3 mph) and operating pressure of 6.9 bar (100 psi), we found four TeeJet disc-core combinations that emitted a hollow cone pattern and approximately the same output as the Arag Microjets. The five nozzles sets tested were:

We did not use nozzle drop hoses (aka drop arms or hose drops) because it has been firmly established that they are absolutely required to achieve under leaf coverage See OMAFRA factsheet 10-079.

While there were some complications with setting up the papers for the demo, we observed the following:

The demo also raised some questions:

Special thanks to Syngenta Canada for providing lunch, to C&R Atkinson Farms Ltd. for hosting, to TeeJet for supplying the disc-cores and water-sensitive papers, and to Dr. Sean Westerveld, Dr. Melanie Filotas and Megan Leedham for contributing to the workshop.